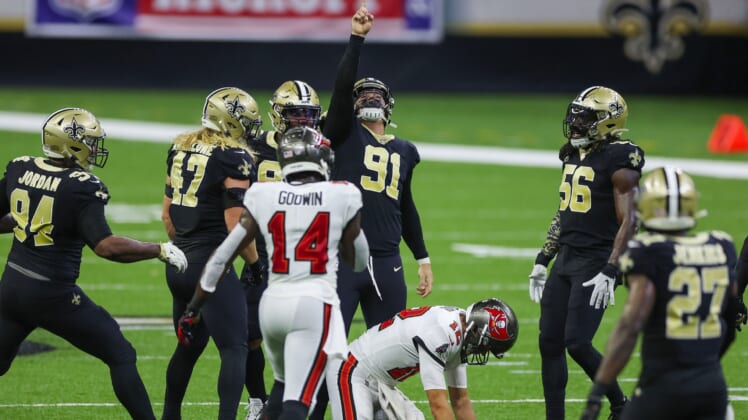 After months of waiting, the New Orleans Saints and Tampa Bay Buccaneers took the field Sunday for the most-anticipated game of Week 1.

A clash between Drew Brees and Tom Brady, along with countless other NFL stars, delivered plenty of excitement. Even without fans in the Superdome, the Saints still made their mark early on to seize momentum.

We’ve seen Brady lead miraculous comebacks throughout his legendary career. That didn’t happen on Sunday as the future Hall of Famer’s arm dug the Buccaneers into a deeper hole. By the time he started getting comfortable, it was too late.

Let’s dive into the winners and losers from the Saints’ 34-23 win over the Buccaneers in Week 1.

After signing Kamara to the eye-popping extension he wanted, the All-Pro running back rewarded the organization. While the 25-year-old didn’t make a ton of big plays in Week 1, he came through for New Orleans when it mattered most.

Kamara’s 12-yard receiving touchdown opened the scoring for New Orleans and delighted fantasy football owners. A few minutes later, he came through once more with his second touchdown of the quarter. Finally, he put the game away with the 38-yard reception on a gorgeous trick play. Kamara wasn’t healthy in 2019 and it was evident. He’s 100% to start the 2020 season and we’re expecting even bigger things from him moving forward.

This is not what the Buccaneers signed up for. It’s not that Bruce Arians isn’t familiar with a quarterback who throws multiple interceptions and a backbreaking pick-six, but he didn’t expect that to happen with Brady.

There are justifiable excuses that can be made for Brady in this game. He’s still adjusting to a new offense and the timing with this receiving corps clearly isn’t there yet. But the pick-six was inexcusable and he managed just 239 yards on 36 attempts. Brady is still a good quarterback, but this is also a 43-year-old player in decline.

All it takes is one play to change everything in a matchup between two great teams. The Buccaneers had a chance to go down the field and make it a one-score game early in the third quarter against the Saints. Instead, Jenkins made the play of the game.

The 31-year-old cornerback, who New Orleans scooped up after his disastrous tenure in New York, changed everything for New Orleans. Jenkins’ pick-six gave New Orleans a 24-7 lead and provided the entire team with a spark. The Saints are 1-0 and Jenkins is earning his extension.

When the Buccaneers traded for Gronk, already sky-high expectations for this offense reached mythical proportions. Even after taking a year off from football, many thought he would be the same star fans fell in love with. While Brady’s timing with new receivers would be off, Gronk would make things happen in those moments.

Instead, we saw more Gronk spikes around the league in Week 1 than actual catches by the future Hall of Famer. When Brady was rattled or needed quick throws, Gronk was absent. We expect some strong games in the future, but Gronk is no longer the unstoppable force that delighted NFL fans.

When defensive coordinators dedicate a week to creating a plan to stop the Saints’ offense, they prioritize stopping Michael Thomas. Tampa Bay did an excellent job shutting Thomas down and it smothered the run game. The Saints lose games when that happens, but Cook saved the day.

The 33-year-old found holes in the Buccaneers’ defense and ate them alive. He led the team in receiving and delivered the only big play for this passing attack. Ultimately, it was Cook’s contributions that kept this offense going and he was pivotal to the win.