The 2022 NFL season is fast approaching and the Washington Commanders will take the field in Week 1 with the organization setting high expectations. While it’s difficult to predict the exact outcome of what will happen, several realistic scenarios could unfold.

A variety of factors will determine the final NFL standings. Washington will certainly go through its share of injuries in 2022. In addition, the decision by head coach Ron Rivera to retain the majority of his coaching staff means improvement will almost entirely depend on the players.

The Commanders’ biggest offseason move was the Carson Wentz trade. While the results this summer look bad, he still brings a much higher ceiling and floor to the offense than it experienced with Taylor Heinicke. Defensively, the depth chart largely looks the same and that’s a decision that will be a fascinating storyline in its own way this year.

Let’s dive into the three potential outcomes for the Washington Commanders in 2022.

There are a variety of reasons to project things working out positively for Washington in 2022. After all, the front office acquired Wentz for a reason. He is going to play behind an above-average offensive line, providing him with more time to throw. Working from a clean pocket, Wetz has more than enough physical talent to help Terry McLaurin, Jahan Dotson and Logan Thomas have career-best seasons.

This is the same quarterback who posted a stellar 17-3 TD-INT ratio with a 100.1 quarterback rating in his first nine starts with the Indianapolis Colts. He is also under contract through 2024 and carries a $26.17 million cap hit next year that would be a bargain for a top-14 passer.

There are more than enough pieces in place for Wentz to be successful. If he eliminates the dumbfounding mistakes and mechanical issues that doomed him in Philadelphia and Indianapolis, this will be the best quarterback the Commanders have had in years. Of course, that elevates the play of the skill players around him.

It’s not the only aspect of the Commanders’ roster with room to improve. Washington brought back the same defense as it had in 2020 for a reason. There are impact players at multiple spots and it translated to outstanding success in 2020.

Even with Chase Young sidelined to open the regular season, Washington’s defensive line boasts more than enough difference-makers to account for the early absence. Once Young returns, this is a group physically capable of becoming one of the best four-man pass rushes in the NFL.

It might all come down to coaching and execution, but we’ve seen this same group get it done despite Jack Del Rio being at the helm.If they can repeat that and Wentz steps up, the Commanders would be a lock for the playoffs and could even make it to the Divisional Round.

Washington’s worst-case outcome might not have lasting effects that carry over for years. However, it is plausible to think the 2022 season could make the offseason saga centered on Daniel Snyder feel like a better time.

Wentz burned bridges with the Eagles and Colts. He lost the respect of the locker room in Philadelphia, with teammates believing he wouldn’t hold himself accountable and played favorites. Joining the Colts’ organization was supposed to change that but it only took a few months before that building was ready to shove him out the door.

Alarmingly, those aren’t even the problems the Commanders have experienced yet. Instead, Wentz is making the same mistakes in practice with every time of poor throw imaginable. The coaching staff remains optimistic and is confident working with the 29-year-old over time will correct things. Then again, ask coaches in Philly and Indianapolis how that worked out.

Maturity issues and a lack of accountability from Wentz are two way to cause problems in the Commanders’ locker room. Unfortunately for Washington, there is another. Del Rio already caused problems once this year but Rivera and the organization avoided a disaster. If Del Rio delves further into comments that can fuel tension in a divided building, it could lead to more than a dust-up.

If all of that isn’t enough, the NFL investigation into allegations of sexual harassment and financial misconduct against Snyder might conclude this year. Considering we just saw commissioner Roger Goodell strip the Miami Dolphins of a first-round pick, it’s fair to wonder what discipline the Commanders might face for a second instance of damaging the NFL’s reputation.

Draft-pick forfeitures, a losing record, reports about locker room hostility and the Wentz trade backfiring. It’s not unreasonable to think all of that could happen to Washington before January.

A few things will go right for the Commanders this season. It’s possible we see it in Jahan Dotson becoming the playmaker that every report out of training camp suggests he will be. We also have enough reason to think Young can eventually return and become the dominant force that Washington drafted him to be.

Wentz also isn’t as bad as his on-field reputation might suggest. There are going to be a few moments this year when he looks like an MVP-caliber quarterback, almost single-handedly winning games for the Commanders and competing right in stride with the best at his position.

However, the reverse is also going to happen. He will make inexcusable decisions that directly cause losses. We’re also not especially confident in Washington’s defense returning to what we saw in 2020, especially since Rivera wouldn’t make the necessary changes to his staff.

At the conclusion of Week 18, it shouldn’t surprise anyone if the Commanders finish below .500 and just outside of the playoff hunt. Wentz will have played well enough to at least make the organization consider keeping him, but only because it won’t be in a position to draft a top prospect. Unfortunately, that would mean more of the same for a fan base that has already been put through far too much. 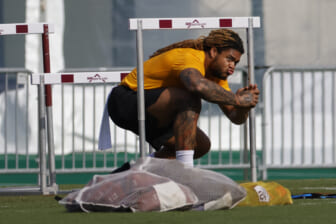