The Washington Commanders went against the grain this offseason with the Carson Wentz trade, acquiring the veteran quarterback when seemingly no one else wanted him. While the 2022 NFL season is a month away, things are off to a rocky start.

Washington drew criticism the moment it acquired Wentz. The Indianapolis Colts were desperate to get rid of him, with that sentiment shared throughout the building. Despite Wentz’s massive contract and a small market of interested teams, the Commanders gave up the 42nd overall and 73rd overall picks along with a conditional 2023 third-round selection for Wentz, the 47th pick and the 237th selection.

In the weeks after the deal went down, Washington expressed confidence in its new quarterback as a long-term starter and the veteran admitted he was happy to just be appreciated by a team.

While the former No. 2 pick has developed early chemistry with Terry McLaurin, a majority of the reports this summer have been more concerning. Wentz immediately struggled with accuracy issues. However, one training camp blunder stood out even more. On Aug. 5, edge rusher Montez Sweat was yelling “Get rid of it! Get rid of it!” as he chased down a scrambling Wentz. Instead, the quarterback ran out of bounds. 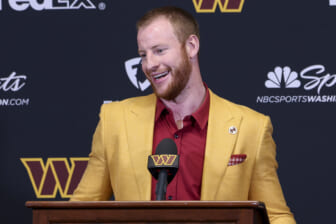 It seems things haven’t gotten much better. Ben Standig of The Athletic evaluated players whose stock was rising and falling at training camp this summer. Wentz led the group of Commanders on the list of fallers.

Standig noted that Wentz is hitting on some big plays during practices, showcasing the heightened ceiling he puts on the Commanders’ offense. However, the inconsistency, poor decision-making and inaccuracy are generating debate about how concerned Washington should be heading into the season.

Should the Commanders be concerned about Carson Wentz?

Even head coach Ron Rivera has acknowledged Wentz is dealing with some issues in practice. Accuracy is the veteran quarterback’s biggest problem right now, missing throws in a variety of directions. 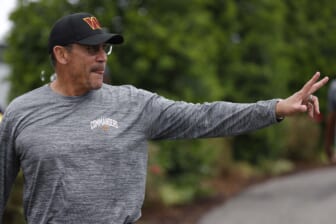 However, he also made it clear that Wentz is the unquestioned starter and there are still things the coaching staff sees throughout the week that provide optimism moving forward.

“It’s a lot better than you give (Carson) credit for just because of the way things happen in practice. There’s a lot of little nuances that we see and that we look at and get to review. There are some inaccuracies, but it’s nothing that we are overly concerned about.”

Issues with ball placement have been more common in recent years for Wentz. He completed just 57.4% of his pass attempts in 2020 with the Philadelphia Eagles. While he improved last season with the Colts, he still only completed 62.4% of his attempts.

Washington can live with some poorly-thrown balls and high throws if its quarterback also delivers more explosive plays. The Commanders want to take more shots vertically next year and Wentz is a significantly better quarterback than Taylor Heinicke.

If history is any guide, though, there is something else worth monitoring. Wentz seemingly burned bridges with the Eagles’ coaching staff and then in Indianapolis because he resisted criticism and reportedly wasn’t accountable.

The Commanders’ coaching staff is still speaking positively about its starter right now, but the months will be a far better judge of Wentz’s coachability and consistency.