Washington Commanders head coach Ron Rivera knows the value of practice reps in training camp and how important it is to not waste precious time. After several days of his players doing just that, Washington’s head coach used the microphone to respond.

As covered in-depth by Ben Standig of The Athletic, Commanders’ practices this week have seen instances of trash talking and ‘conversations’ after the whistle skyrocketing. It’s a natural outcome after players put on their pads for the first time this summer with collisions frequently occurring and plenty of arguing back and forth.

Rivera, who has coached in the NFL since 1997 and played in the league from 1984-’92, knows it’s all part of the process. As a head coach, though, he’s letting players know that there is a line in the sand and it’s starting to get crossed.

After some back-and-forth between linemen continued during a no-huddle drill in practice on Wednesday, Rivera stopped everything. Not only did he address the players during practice, he brought up the matter to reporters after.

“The reason I did (that) was because we were working a certain phase of our game. … No-huddle. And we’re sitting there arguing about little things. The whistle gets blown, and we’re still screwing around. We can’t do that. We got to get our asses in position, and we got to play football. That’s what I was off about.”

This is typical for Rivera, a veteran coach who has very little patience for wasted time and distractions. When he first took the job in Washington, he removed ping pong tables from the locker room in 2020.

Rivera went after defensive tackle Daniel Wise for frequently trash talking and getting into it with teammates throughout the day. Speaking to reporters, he explained why it’s so important for him to address it now.

It’s possible Washington’s defense has reason to talk trash to its opposition right now, with quarterback Carson Wentz among those struggling. However, it’s evident that players took it past Rivera’s line of patience. If it happens again, the 6-foot-3 head coach might have to take things even further. 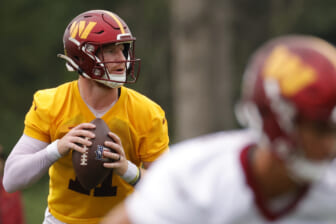