Ron Rivera admits to ‘some inaccuracy’ from Carson Wentz 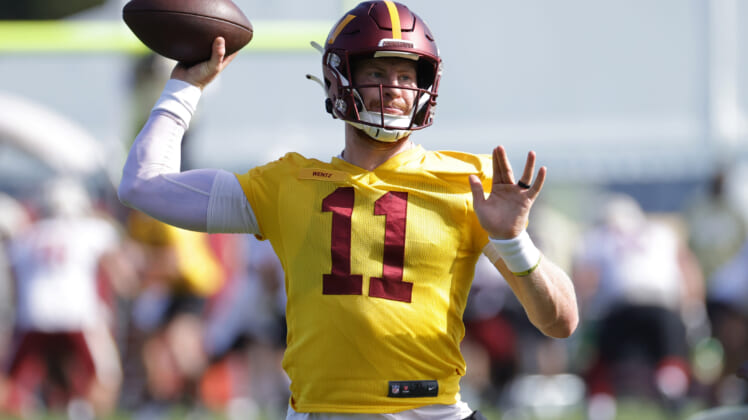 The Washington Commanders upgraded at the quarterback position this offseason, which was a top priority. Not only did they manage to retain Taylor Heinicke, their starter in 15-of-16 games in 2021, they added Carson Wentz via trade.

Wentz is a big name in that he’s a former No. 2 overall pick, has made a Pro Bowl, and finished third in MVP voting in a year where the Philadelphia Eagles won a Super Bowl.

Yet, there’s a reason he’s now on his third team in as many seasons.

Last week reports emerged of Wentz struggling with inaccuracy early in camp as he gets acclimated to his new teammates. Unfortunately, it doesn’t sound as if those issues have disappeared, but his coach, Ron Rivera, isn’t concerned early on.

Now that we’ve heard it from the coach’s mouth, it’s clear that Rivera isn’t freaking out about how Wentz is doing so far. Defenses are typically ahead of offenses early in camp, and his QB has yet to even play a game with his new teammates. Unless he can’t hit the broad side of the barn, whatever accuracy issues he’s experiencing can’t be that bad, right?

Accuracy issues aside, Carson Wentz is still their best option

Alright, so maybe some of the same woes that have wiped Wentz away from two other playoff contenders haven’t been fixed. But even at his worst, Wentz still has a higher floor than their other option, Taylor Heinicke.

The thing is, Wentz has displayed an ability to play at an elite level. He had 33 touchdowns to just seven interceptions in his second season as a pro. But he’s also had these valleys, like his final year in Philly where he led the NFL in interceptions with 15, and he played in just 12 games.

On the bright side, Wentz seemed to correct his problems in his lone year in Indianapolis, where he was back to tossing just seven picks in 17 starts, while also boosting his completion percentage by five points over his previous season.

For Wentz it may be all about how well he can develop trust with his receivers. He certainly has a dangerous weapon with Terry McLaurin, and Jahan Dotson has the potential to be special too.

Even then, Wentz doesn’t have to put together his best season, he just needs to help them win a few more games than they did a season ago with Heinicke. If Wentz can help the Commanders improve on their 7-10 record, no one will care how they got there. As long as the playoffs are within grasp, but that’s obviously no guarantee.

But with the accuracy talk out there, everyone will be watching closely when the Commanders take on the Carolina Panthers on Saturday in the first preseason matchup of the year.