The 2022 NFL season has proven far more challenging for the Tampa Bay Buccaneers and quarterback Tom Brady. Still alive in the NFL playoff race, Brady will have something else to play for in the final two games.

If the Buccaneers defeat the Carolina Panthers at home in Week 17, they clinch the NFC South and a home playoff game in the NFC Wild Card round. While that likely means facing a daunting challenge against the Dallas Cowboys, the team’s focus remains on just making it into the playoffs and then letting Brady take things from there.

It means there will be more than enough motivation for the Buccaneers to keep their foot on the gas down the stretch, putting their playoff hopes on the shoulders of the future Hall of Fame quarterback.

Thanks to Tampa Bay’s issues offensively this season – running the football and pass protection – the greatest quarterback in football history could soon add two new records to his list of career accomplishments.

He will likely take the single-season record from Stafford. Over the last five weeks, Brady is averaging 48.8 pass attempts per game and he has at least 48 attempts in three of those contests. Barring injury, he should break the record on Jan. 8 against the Atlanta Falcons in Week 18.

Brady will also likely pass another historical mark in the next two games. He set the NFL single-season record with 485 pass completions in 2021, just passing Drew Brees (471 in 2016), who previously held the top three spots on the leaderboard.

When Brady takes the field against Carolina, he will be just 43 pass completions shy of beating his own record. Considering he averaged 32.2 completions per game over the last five contests, it’s safe to assume he will also reach that milestone in Week 18. 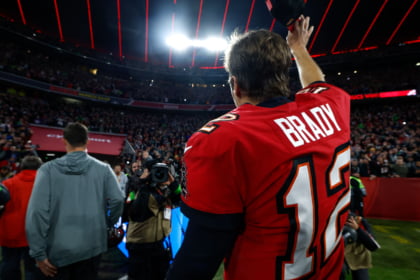 Setting the NFL’s single-season passing records doesn’t suggest he is being extremely efficient with his throws. According to Pro Football Reference, Brady ranks 17th in On-Target rate (71%), behind the likes of Geno Smith, Ryan Tannehill and Andy Dalton. Furthermore, his 6.2 yards per attempt average is the worst since he became a starting quarterback in 2021.

Both the NFL and the Buccaneers might want to honor the moment when Brady sets those new league records, but it’s safe to say they aren’t going to be celebrated very much by the all-time great considering his performance throughout the season.