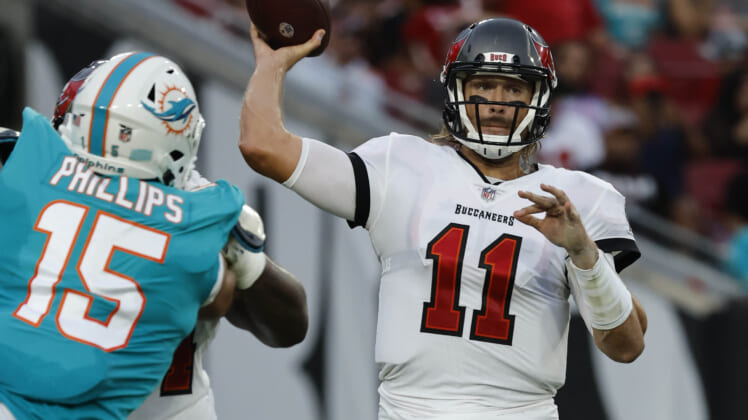 The Tampa Bay Buccaneers hosted the Miami Dolphins this week for joint practices and then again on Saturday for their first preseason game. Some starters didn’t play on both sides of the field because they already put in controlled work this week. This gave some depth players and guys trying to make the roster more chances to shine.

For the Bucs, Tom Brady was the big story after announcing he’d be taking some time off. But he wasn’t the only one. There were other players not taking live snaps as well. Others who sat out included Leonard Fournette, Mike Evans, Chris Godwin, and Julio Jones, to name a few.

Blaine Gabbert, the ten-year veteran from Missouri, got the start at quarterback and ran the offense flawlessly. He went a perfect five-for-five passing with one touchdown and no interceptions. In the backfield was Giovani Bernard, who’s in his second season with the Bucs, and Keyshawn Vaughn.

Both had an ok night but nothing extraordinary. They both rushed for 19 yards, but Vaughn also had two receptions for 22 yards. At the receiver positions, Tyler Johnson had six receptions for 73 yards and Jaelon Darden, who has had an amazing week at practice, had one catch for a 23-yard touchdown from Gabbert.

On the defensive side, third-year linebacker Cam Gill was having an amazing game with four tackles, a sack, and two tackles for a loss before he injured his foot and couldn’t return. Olakunle Fatukasi, a rookie linebacker from Rutgers, had an great game with six tackles, one tackle for a loss, and one pass defended.

Unknown receivers making a name for themselves

There were some surprise performances from players nobody has been talking about that definitely raised their stock. Wide receiver Kaylon Geiger, rookie from Texas Tech, finished the night with four receptions for 52 yards.

Related: 3 Tampa Bay Buccaneers players who could have career seasons in 2022

If we could take away anything from this preseason game, it would be that the Buccaneers have incredible depth at the skill positions. The receivers group may be the best I’ve ever seen. Then to top it off, the receivers fighting for a roster spot, seventh or eighth on the depth chart, are as good as a lot of second and third receivers.

The running backs are highly talented — six or seven deep. It’s a wealth of talented skill players that is simply ridiculous. Then you look at quarterback, and Blaine Gabbert is a starter resting at backup. Next is Kyle Trask, who had raw talent but needed to sit and learn. What a dream to be mentored by Tom Brady and Gabbert. No wonder he looked so good.

Tampa Bay will be Super Bowl contenders this season and if there was any doubt it should be replaced with faith before the season starts. The weakest point from a depth perspective is offensive line. So as long as the line holds strong the Buccaneers may be the team to beat in the NFC.