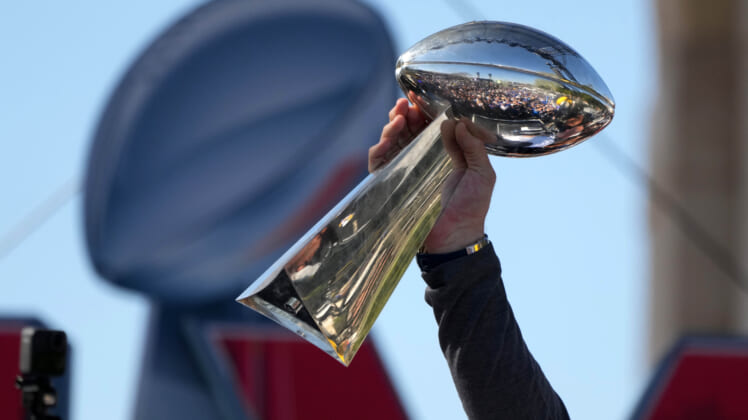 Every year since 1966 the Super Bowl has given NFL teams the chance to prove who the league champions are on the biggest stage. Over the years there have been many Super Bowl winners and losers, but which team has won the most Lombardi trophies? Which football player has more Super Bowl rings than any other in NFL history?

Who has the most Super Bowl wins? That depends if you’re talking among players or teams. Don’t worry, we’ve got all the answers.

There are a total of five teams with just one Super Bowl victory.

This is a little better group to be in if we’re grouping Super Bowls by team. Each of the teams listed below have won two Lombardi trophies in their franchise history.

Two more teams who have been around forever, the Green Bay Packers began play in 1919 and the New York Giants in 1925. Both teams have enjoyed historic victories in their time. There’s a reason why Vince Lombardi has the Super Bowl trophy named after him, the Packers were dominant in the 1960s.

Talk about dominance, the Dallas Cowboys had two eras to be proud of, with two Super Bowl wins in the 1970s and three more from 1984-94 thanks to a multitude of stars. The San Francisco 49ers have had some of the greatest players of all time and won a whopping five Super Bowls from 1981-94. What a time to be alive.

No team has more Super Bowls than the New England Patriots and Pittsburgh Steelers, who each have six apiece. Eventually, there may be a team with more Super Bowl wins, but for now, the Steelers and Patriots have the ultimate bragging rights.

Players with the most Super Bowl wins

Teams have their own records, but players switch cities every offseason, meaning some players could win a Super Bowl every year if they have some luck. Which player has the most Super Bowl wins?

None other than Tom Brady of course. There’s a reason why they call him the GOAT. Seven Super Bowl rings will do that. Behind TB12 is Charles Haley, who won two with the 49ers and three more with America’s Team.

Related: Are the Denver Broncos built to win the Super Bowl next season?

Details about the Lombardi Trophy

It’s been said that the Lombardi Trophy takes a total of four months to construct, with up to 72 hours of labor put into the work, costing a total of $50,000 when all is said and done. Yet, the actual value of the trophy is just $10,000.

Meaning when Tom Brady decided to throw the Super Bowl LV trophy from one boat to another during the Buccaneers’ Super Bowl parade after the 2021 season, even it had landed at the bottom of the bay, it wouldn’t have been the end of the world.

Even though the trophy seems like it would weigh a hefty amount, it is constructed of sterling silver, which isn’t that heavy. In all, the Lombardi weighs 107.3 ounces or roughly seven pounds.