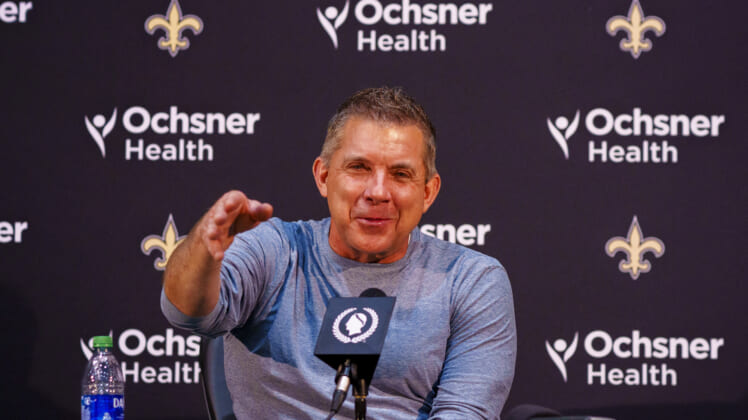 Sean Payton is enjoying his break from coaching in the NFL months after resigning as the New Orleans Saints head coach. While he isn’t quite sure what the future holds for him in coaching, he knows he was never going to be joining the Miami Dolphins.

Shortly after Payton retired, reports surfaced that the Dolphins planned to pursue him to replace Brian Flores. Miami had a vision for exactly how its offseason would play out. With convincing from team owner Stephen Ross, quarterback Tom Brady would retire and become a top executive in the Dolphins’ front office.

At the same time, Miami called New Orleans about acquiring Payton. The intention would be for Brady to be a part of the personnel acquiring Payton and then hiring him as the Dolphins’ head coach. After enough time passed, Brady would unretire and become the starting quarterback. All of that became derailed by Flores’ lawsuit against the Dolphins, NFL, Denver Broncos and New York Giants.

While the civil suit played a large part in Miami not getting Brady, the organization seemingly never had a shot at Payton. New Orleans told Miami it had no chance and Payton seemingly confirmed that while speaking to reporters at the Zurich Classic Celebrity Shootout.

“I have no clue about the Tampa Bay/Miami Dolphins/Tom Brady rumor. My understanding is that there was a request that was put in or that intermediaries talked. I’m like the rest of you. U hear that story.”

Payton’s comments this month are further backed up by what he said in January, sharing on the Dan Patrick SHow that two teams reached out to him indirectly. As he told reporters recently, the only team he would have coached in 2022 was the Saints.

NFL fans will not see Payton coaching for any team this season. The 58-year-old is committed to taking some time away from the grind that comes from the position, instead looking for an opportunity to be involved in football through a more relaxed position.

He emerged as a candidate for multiple broadcasting gigs, including Amazon’s Thursday Night Football booth and received some buzz to replace Troy Aikman as Fox’s primary NFL analyst for marquee games. Ultimately, both positions were filled.

Notably, he engaged in negotiations with Fox in February and teased at the Zurich Classic Celebrity Shootout that he would likely be taking on a television role. While nothing is official, it wouldn’t be a surprise to see Payton working as an analyst on Fox’s pre-game show this fall.

After a year on television, he’ll be the top coaching candidate in 2023 with the Los Angeles Chargers, Dallas Cowboys, Arizona Cardinals and Seattle Seahawks as potential destinations.