The San Francisco 49ers need a new backup QB after Trey Lance was carted off the field in an air cast Sunday against the Seahawks. 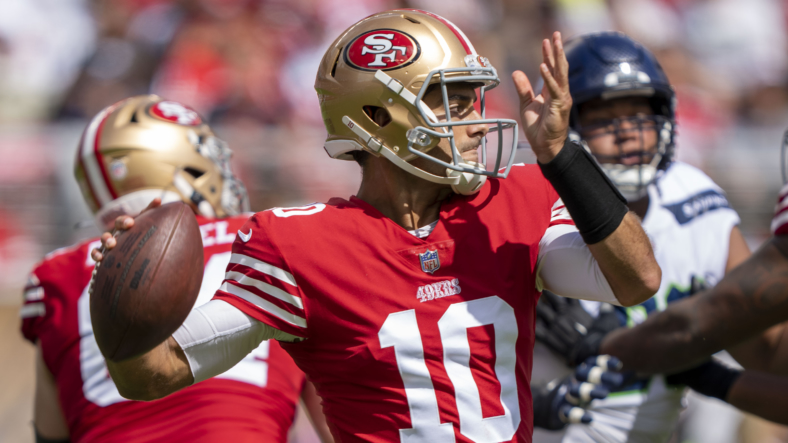 The San Francisco 49ers started the 2022 NFL campaign with high hopes, especially regarding the quarterback position as this would be Trey Lance’s first season as the team’s starter. Following a brutal Week 1 showing against the Chicago Bears in a 19-10 loss played in impossible conditions, a slew of players — including Lance — came away from the defeat with a lot to work on.

The positive aspect is that the 49ers were heading home to the comfy confines of Levi’s Stadium to host their division rival Seattle Seahawks. Naturally, more rain was expected and while Lance was able to get off to a decent start early on, time suddenly stood still after the first-year starter ran it up the middle on second-and-eight and ended with a vicious-looking collision with Seattle’s Bryan Mone and Cody Barton. Lance tried to get up and went right back down.

To call it ugly and squeamish to see on replay would be putting it mildly.

To have Jimmy Garoppolo ready and waiting in the wings might have some Niners fans calling it a downright miracle.

What many expected it to be is exactly what it turned out to be. A broken ankle that will require season-ending surgery. Head coach Kyle Shanahan dropped the devastating news about Lance following San Francisco’s 27-7 inspired victory over Seattle led by Garoppolo.

The luxury of having a QB of Garoppolo’s caliber serving as your backup is as rare as a New York Jets winning streak. The way he hopped right in there without missing a beat served as a huge uplift during an otherwise sullen moment at Levi’s Stadium with Lance being carted off the field in an air cast. But Jimmy’s been injury-prone throughout his career and having rookie Brock Purdy — aka Mr. Irrelevant — a play away from becoming the team’s starting quarterback will not suffice.

Enter Cam Newton. This man has been waiting for an NFL team call. It’s just a question of whether Newton would be willing to take on a backup role, a story that seems to change on a moment-to-moment basis. But the allure of the San Francisco 49ers’ offensive weapons alone might be enough to talk him into it. At the age of 33, there’s no question Cam has enough gas left in the tank to properly bridge the gap between Garoppolo and Purdy. It just makes too much sense.

The San Francisco 49ers should take a flyer on Ryan Fitzpatrick

Ryan Fitzpatrick’s 2021 tenure with the Washington Commanders ended abruptly with a hip injury in Week 1 that ended his season after throwing just six passes. That’s no way to go out for a legendary, prideful veteran and sure as heck isn’t the way to go out for someone who happily owns being the person Tom Brady referred to in a disrespectul manner.

Now we all know Fitz is getting up there at the ripe old age of 38, but he is the quintessential NFL backup QB and is smart enough to know Jimmy G isn’t made of steel. The possibility of playing and recapturing some of that “Fitz Magic” one last time would absolutely be there despite the fact that Fitzpatrick is happily retired and a part of Amazon’s “Thursday Night Football” coverage.

This one’s pretty simple. The Pittsburgh Steelers coaching staff has been enamored with starting quarterback Mitch Trubisky while Steelers fans have been busy chanting their ever-living hearts out for Kenny Pickett to get under center and magically take over the NFL.

So the idea of saving Mason Rudolph from endless heckling and disrespect from Steeler Nation sounds like a phone call worth making. Rudolph would also come cheap from a financial and trade compensation standpoint.