Ranking the injuries that have shaped the 2017 NFL season

There has been no shortage of devastating injuries thus far in the 2017 NFL season. Just past the midway point of the year, several teams are trying to survive without some of their best players.

Here, we cover five teams that have lost their starting quarterbacks. In all but a couple of cases, those quarterbacks are projected to be sidelined for the rest of the season. Outside of the quarterback position, other teams are doing their best to compensate for missing some Pro-Bowl caliber playmakers.

On the defensive side, a top-rated cornerback, who has not missed a game since 2012, will be watching his team from the sidelines. Meanwhile, a two-time NFL sack master also found his season cut short.

Here we have ranked 18 prominent injuries that have shaped the 2017 season.

The Bengals took a gamble by selecting this injury-prone Washington product ninth overall in the 2017 NFL Draft. So far due to health-related issues, Ross has managed to play in only three games. He has one rushing attempt for 12 yards and a fumble to show for his efforts. The rookie receiver has yet to make one official catch. Brought on to help veteran A.J. Green’s production, Ross has not lived up to expectations. Quarterback Andy Dalton should be averaging more than 1.4 passing touchdowns per game at this point. Ross staying healthy and becoming a reliable contributor is long overdue. 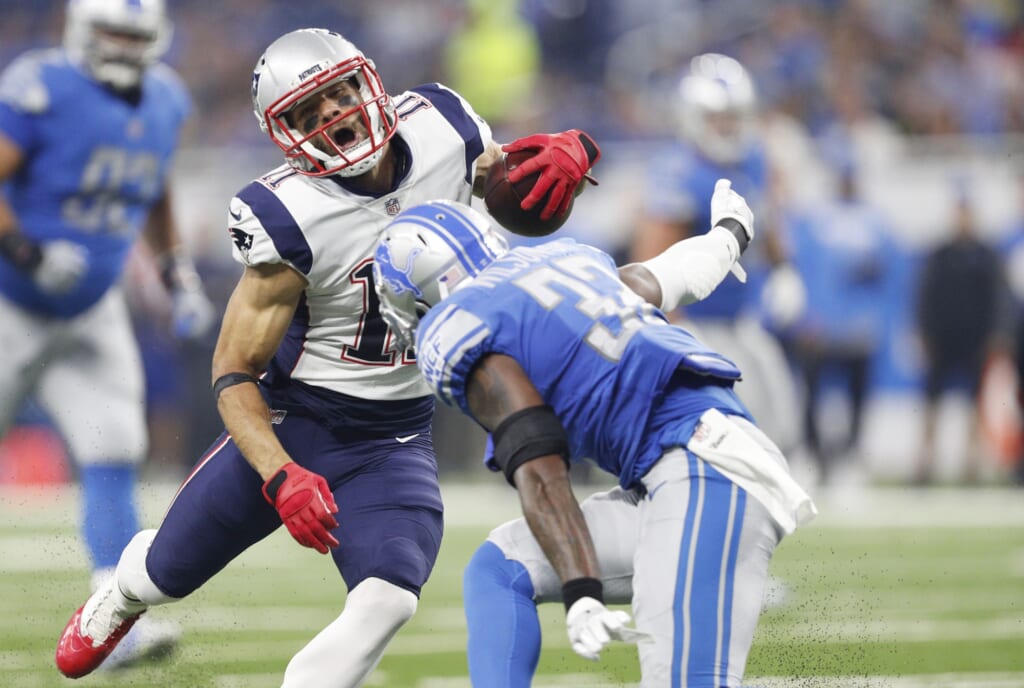 The Patriots are keeping afloat and sit in first place in the AFC East. But, quarterback Tom Brady is clearly missing his go-to target in that of Edelman. Edelman was lost for the season to a torn ACL he suffered in preseason Week 3. Last year, Edelman drew career-highs with 159 targets and 1,106 receiving yards. Attempting to pick up the slack are wideouts Chris Hogan and Danny Amendola. But, that duo can’t quite seem to maintain its health. Edelman being on the field would have certainly helped in many cases that we have seen Brady fail to connect with his receivers.

The 49ers’ season is not going swimmingly, and the absence of Garcon does little to help. San Francisco lost its best wide receiver to a neck injury in Week 8. Up to that point, Garcon tallied 40 catches for 500 yards, setting him on pace to cross the 1000-yard plateau. Thankfully, rookie quarterback C.J. Beathard managed to lead the 49ers to their first win. Though, Garcon being part of the offense moving forward would have only helped. The 49ers invested heavily in Garcon in the offseason because of his big play-making skills. Now, that strategy is out the window for the rest of the year.

Tannehill’s return to the field was derailed after he tore his ACL in the preseason. All he can do now is watch from the sidelines while the Dolphins attempt to swim more than they sink. So far on the season, the Dolphins have been completely shut out twice. That happened once with Jay Cutler under center in Week 4 and again with Matt Moore in Week 8. Games such as these are absolutely not acceptable. The team is on a three-game losing streak and has managed just four wins in nine games. The mood around Miami’s locker room cannot get much worse. 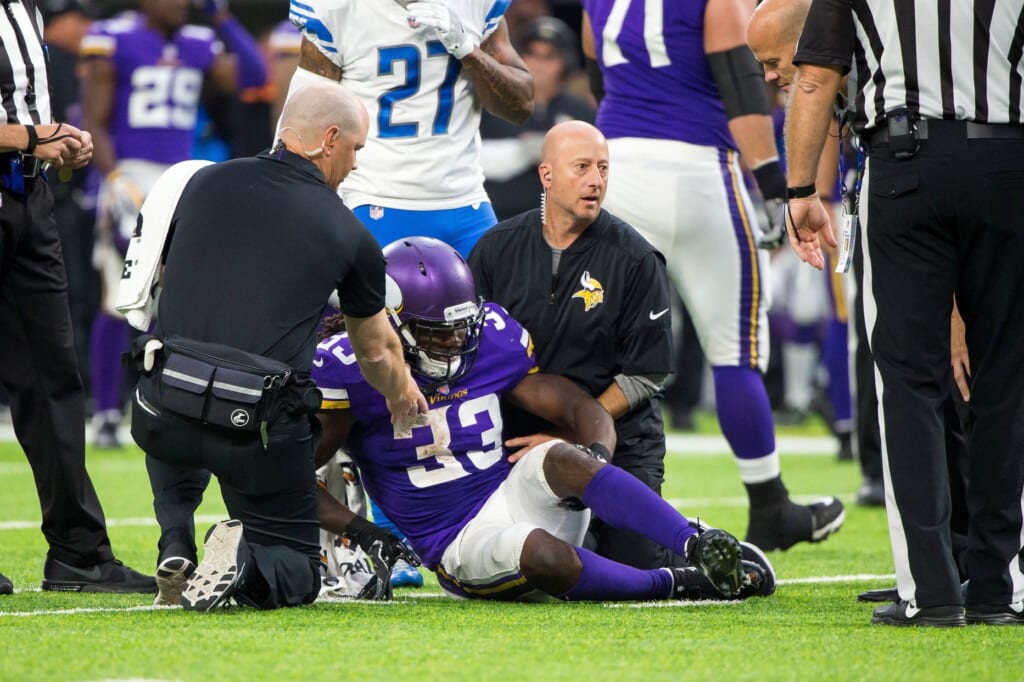 Cook, who was selected in the second round of this year’s draft, entered the season with so much promise. Unfortunately, the rookie suffered a torn ACL in his Week 4 game. Prior to his injury, Cook was averaging a stout 4.8 yards per carry and 88.5 rushing yards per game. He also had two rushing touchdowns as well as 11 catches for 90 yards on record. Running backs Jerick McKinnon and Latavius Murray have been adequate in picking up where Cook left off. But, neither back has been as quick and powerful as Cook. We cannot wait to see Cook make a healthy return in 2018.

The five-time Pro-Bowl safety had his season cut short when he ruptured his Achilles tendon in Week 1. Berry’s absence dealt a devastating blow to a Chiefs secondary that has not been nearly as effective without him. Without Berry present, the Chiefs are giving up the fifth-most passing yards per game and have allowed 16 passing touchdowns. Kansas City is holding on to first place in the AFC West with a 6-3 record. But, we have to wonder if that record would be even better with Berry present.

Without Hightower, the Patriots’ defense has seen better days. In 2016, New England gave up a league-low 15.6 points on average per game. Now, it is ceding 21.7 points per contest. Hightower’s absence certainly hurts as the Patriots continue to give up a league-high 408.3 yards per game. In stopping the run, the Patriots are as weak as it gets, giving up a league-best 5.0 yards per carry. Hightower played in five games, managing two sacks and 14 tackles before injuring his pectoral muscle. If any one element stands in the way of the Patriots succeeding in the postseason, it is New England’s crippled defense. 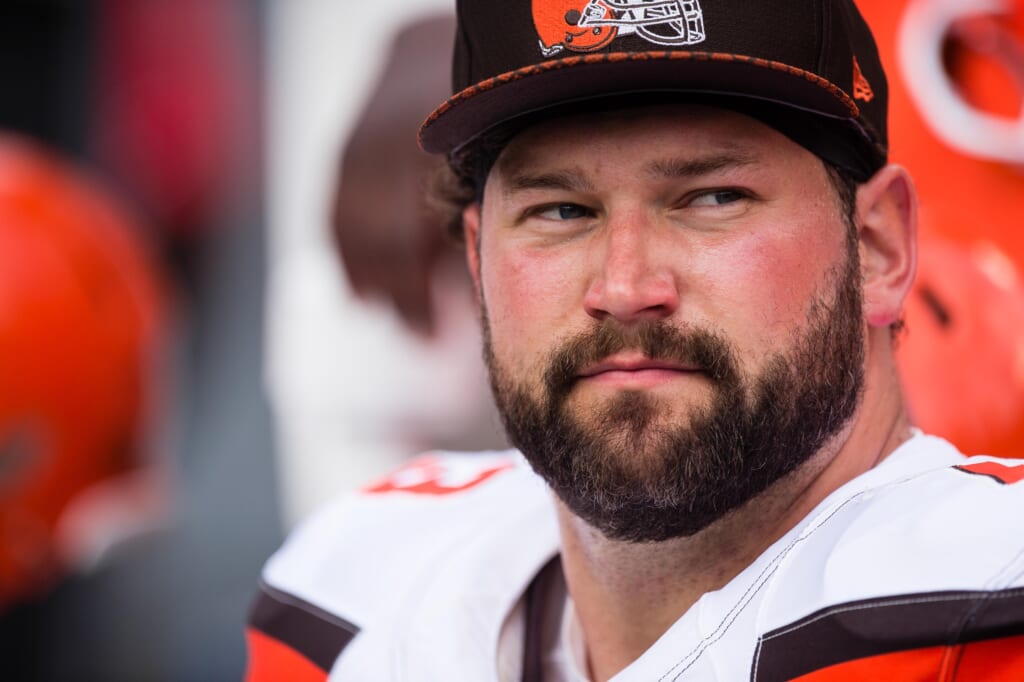 Thomas’ torn biceps injury was a difficult pill to swallow in Week 7. The six-time All-Pro tackle had yet to miss a single snap since being selected third overall in the 2007 NFL Draft. His absence is a gut punch to his team and to Cleveland fans. He was practically the only bright star on a Cleveland offense that tries its best each year to succeed. The last thing rookie quarterback DeShone Kizer needed was for his left tackle to get injured.

In an unforeseen turn of events, the Colts lost this rookie first-round pick to a torn ACL and MCL in Week 7. Hooker was having a productive season, recording 21 tackles, four passes defended and three interceptions. The Colts’ defense is currently giving up a league-high 28 points per game as well as 385.8 yards. Without Hooker, the Colts’ secondary is truly hurting.

In sticking with the Colts, we switch channels to their offense. The Colts are 3-7 and residing at the basement of the AFC South. Week after week since the Colts first game, it was anticipated that Luck would finally make his debut. But, that has been scrapped and Luck is now on IR. Luck’s potential return next season still paints a grim picture. Luck has been on the decline after producing a playoff appearance in each of his first three NFL seasons, from 2012-14. Hall of Fame quarterback Steve Young recently expressed his concern that Luck may never return to his former self and the quarterback is apparently looking to receive treatment for his shoulder injury in Europe.

The Ravens are one team that has been hit heavy with injuries. Losing left guard Yanda in Week 2 for the season to an ankle injury put a crimp on the Ravens’ plans. Nine games in and the Ravens’ struggles on offense are no laughing matter. Specifically, quarterback Joe Flacco often looks like a rookie. In Yanda’s absence, Flacco has been sacked 19 times and sports a career-low 72.7 quarterback rating. In all, the Ravens’ offense ranks 30th in total yards accumulated per game. 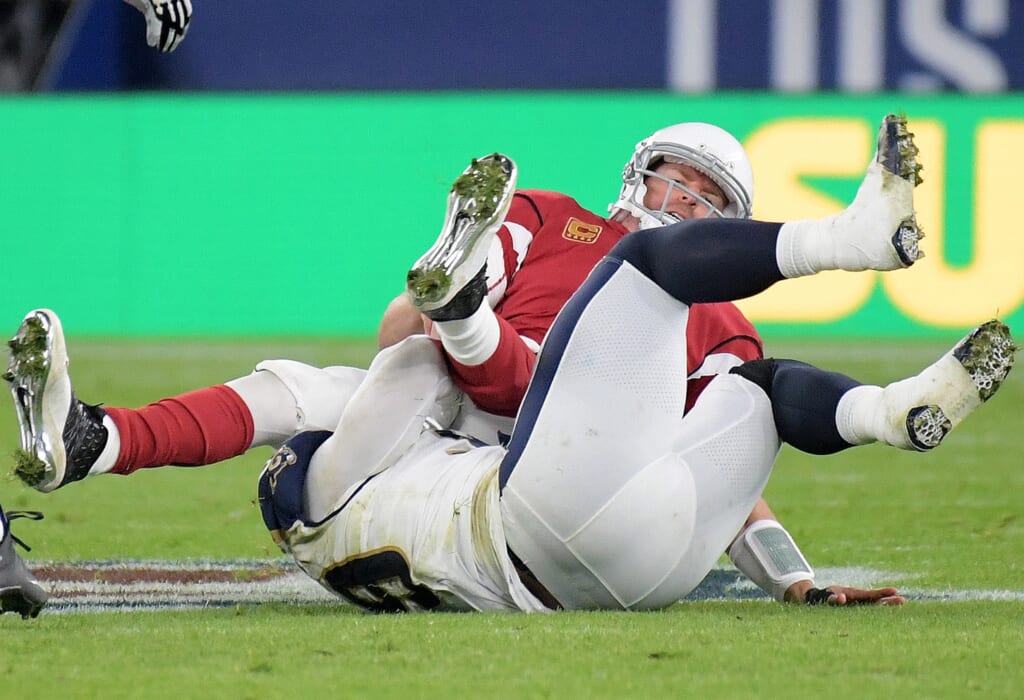 Palmer’s Cardinals were not exactly sprinting out of the gate before his injury. But now that Palmer is sidelined with a broken arm, the outlook for the Cards to push ahead in the NFC West is bleak. The good news is Palmer is eligible to return December 24. But, the bad news is backup Drew Stanton is now out with a knee injury. Desperate times call for third-stringer Blaine Gabbert to start in Week 11 as the Cardinals attempt to build on their 4-5 record.

Gone is the pizzazz OBJ brought to game day after he injured his ankle in Week 5. His loss has been a painful one for a Giants team that’s drowning with a 1-8 record. In Beckham’s absence, wide receiver Sterling Shepard has stepped up. But, he too was injured in Week 5 and it took until Week 9 for him to return. Along the way, tight end Evan Engram has done a wonderful job contributing. But, the Giants’ offense looks nowhere near as dynamic as it was when Beckham was on the field.

The Texans losing Watt to a tibial plateau fracture in Week 5 was a low blow. This was particularly sad considering Watt only played three games for the Texans in 2016. When healthy, Watt is beast on the field. Here’s a guy that has led the league in sacks twice in his career while winning NFL Defensive Player of the Year three times. Without Watt present, the Texans’ defense is giving up the 10th-most yards in the NFL and a generous 26.8 points per game. Minus Watt and linebacker Whitney Mercilus, linebacker Jadeveon Clowney — with his six sacks — is trying to hold down the fort.

Sans Johnson, Arizona boasts the 31st-ranked rushing offense. Johnson injured his wrist in Week 1 and has a slim chance to make a late-season return. But, that won’t be soon enough to revive a drowning running game. Try as the Cardinals do, they are averaging just 71.7 rushing yards per game at a clip of 3.0 yards per attempt. They’ve also only scored four touchdowns on the ground. Veteran running back Adrian Peterson has helped some, but he easily becomes neutralized if the Cardinals fall behind. The team currently resides in third place in the NFC West with a 4-5 record. 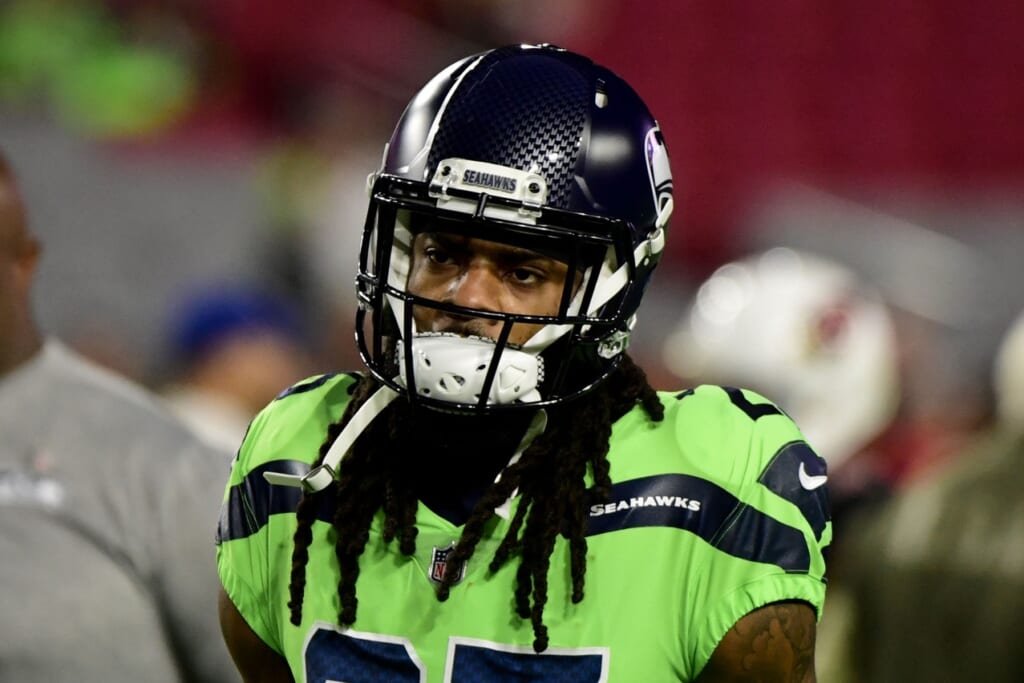 Sherman rupturing his Achilles in Week 10 was a nightmare come true for a Seahawks squad that’s one game back in the NFC West. The team’s pass defense was trucking full steam ahead, but a season-ending injury to the Seahawks’ best defender surely puts a damper on the remainder of the season. Sherman is one of the most-feared corners in the league, and often times, quarterbacks avoid throwing in his direction at all costs. That’s going to have wide-ranging ramifications down the stretch.

One of the most devastating injuries so far this year was Watson suffering a season-ending ACL tear after Week 8. The young rookie was having a remarkable and record-setting year up to that point. Through seven games, Watson passed for 19 touchdowns. He was terrific on his feet, adding 269 yards and two scores on the ground. Watson provided that much-needed hope to a Texans offense that is now stuttering with Tom Savage under center. Since Savage took over, the Texans have lost three consecutive games. The team is now three games behind the Tennessee Titans and Jacksonville Jaguars in the AFC South.

Here’s yet another devastating injury for a quarterback. Rodgers is the glue that holds the Packers together. The future Hall of Fame quarterback suffered a broken collarbone on his throwing side in Week 6. Prior to that game, the Packers held a 4-1 record and were in first place in the NFC North. Backup Brett Hundely was called to duty and has since won just one of the Packers’ last four games. He too is dealing with an injury — to his hamstring –leaving his availability in question for Week 11. Normally dominant within their division, the Packers sit two games behind the first-place Minnesota Vikings. If Rodgers heals this season, the earliest he would be eligible to return is Week 15.