Randy Arozarena has been one of the more vital players to the Tampa Bay Rays’ operation of late. That narrative is furthered by the Rays trading Austin Meadows to the Detroit Tigers.

One way or another, Tampa Bay traded away one of its best players and has to find a way to make up for his departure (the players they received from Detroit, Isaac Paredes and a future draft selection, aren’t yet on Tampa Bay’s roster). The Rays find ways to grind out runs and develop players. Now more than ever, though, they need another standout hitter to come into their own.

Here’s why the Rays need Arozarena to have a breakout season.

Randy Arozarena is a prime candidate for a breakout season

Randy Arozarena is the prime candidate to fill Meadows’ shoes at the plate for the Rays.

The outfielder brings a compelling skill-set to the table. He has a level, compact swing from the right side that generates extra-base hits and slug. Arozarena is also a weapon on the basepaths, as he frequently wreaks havoc and has pitchers looking over at first base.

Arozarena is a smooth left fielder who can also play right. He’s a reliable fielder with speed, versatility and a capable arm on his side. This is an all-around player who has flashed brilliance with the Rays.

The issue with Arozarena is consistency. His best moment came in the Rays’ run to the 2020 World Series, as he tore the cover off the ball at every leg of the race. Furthermore, he’s coming off another impressive postseason.

Arozarena only got a handful of reps with the St. Louis Cardinals in 2019, which was followed by him emerging as a highly efficient, everyday player with the Rays. He was unable to build on his heroic postseason in the 2021 regular season. In fairness, it was his first full season at the MLB level.

Three weeks ago, one could argue that Meadows was the Rays’ most dangerous hitter and their best hitter since 2019. Now it’s difficult to identify that player.

Every team needs a few players it can rely on to drive in runs and create offense on their own. Arozarena has the upside to be such a player. He has shown an ability to hit balls in the gap, blast home runs and force defensive mistakes with his speed.

At the moment, Arozarena, Brandon Lowe and Wander Franco are the Rays’ best hitters. Lowe is coming off a pair of effective power seasons. Franco, 21, sprayed the ball all over the field in his rookie season and makes a great deal of contact. Lowe is a high-level power hitter from the left side, and Franco is a safe bet to build on his rookie season given his offensive tendencies.

There’s plenty of reason to believe Randy Arozarena is going to indeed be an offensive pillar for the Rays. He has come through in the clutch, which includes the playoffs, has a well-rounded skill set and is 27. At the same time, the Rays need him to flat-out rake.

Meadows had his weaknesses and low moments. He had a rough 2020 campaign and didn’t do enough for the Rays to play him in the field on an everyday basis. All that said, Meadows was one of the best offensive outfielders in the sport for the better part of his Rays’ tenure. That’s difficult to replace.

Tampa Bay’s identity is its pitching staff. The Rays have possessed one of MLB’s best starting rotations and bullpens for the last decade. Firmly in the thick of World Series contention, their identity remains unchanged. The difference is the Rays’ offense was a well-oiled machine last season.

Lowe, Meadows, Arozarena, Franco, Yandy Diaz, Mike Zunino and others made for one of the best offensive attacks in the sport. The challenge for this bunch is building on last season with Meadows, Joey Wendle and midseason pickup Nelson Cruz now elsewhere.

Of course, manager Kevin Cash has a fundamentally sound club, but it has plenty of question marks. Can Zunino hit 33 home runs again? Will Diaz and Ji-Man Choi stay healthy for most of the season? Does Manuel Margot answer the bell in a more prominent role? Can Kevin Kiermaier do a little more at the plate? These questions underscore the importance of Arozarena making a jump to stardom. 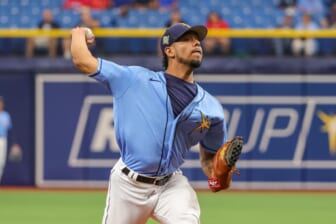 Tampa Bay has to get through a stiff AL East. The Toronto Blue Jays have a loaded roster that just won 91 games and still has room for growth. Meanwhile, the Boston Red Sox and New York Yankees are proven teams accustomed to postseason play.

Trading Meadows three years before he hits free agency falls in line with the Rays’ budget-conscious ways of moving All-Star players multiple years before they hit free agency (e.g. Blake Snell and Evan Longoria). Simultaneously, it’s extremely bold. That bold transaction can be justified by Randy Arozarena becoming just as, if not more impactful than Meadows.