The Tampa Bay Rays just did something unnatural for their sake. This is in reference to the organization agreeing to a 12-year extension that could be worth as much as $223 million with 20-year-old infielder and former top prospect Wander Franco.

Tampa Bay is in the thick of World Series contention, and one of their best players in the long run isn’t going anywhere, in thought, for a decade. This extension says a lot about the Rays, both in their long-term projection of Franco and the fate of some of his teammates.

Here are three takeaways from the Rays’ historic pact with Wander Franco.

It’s no secret that the Rays are a low payroll team that frequently makes trades to keep it that way, trusting their player development system. However, this extension shows that they have a few more dollar bills to spend than they make it seem publicly.

Franco’s extension is likely worth $200-plus million over a double-digit amount of years. For perspective, the previous richest deal in franchise history was Evan Longoria, who agreed to a $100 million extension in 2012.

Maybe the Rays are growing in popularity in their home state of Florida? Perhaps the ongoing prospect of the team splitting its home games between Tampa Bay and Montreal is generating buzz among sports fans in Montreal? Could it be as simple as baseball fans are gravitating towards and/or fascinated by the way the Rays operate?

They’re somewhat unique and innovative in that they were one of the first teams to transparently deploy bullpen days while assembling a pitching staff of versatile arms and a task-oriented offense. 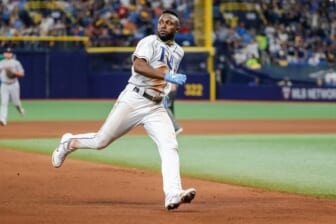 The Rays reside in the American League East, which features two teams that are met with disdain by millions of baseball fans around the country in the New York Yankees and Boston Red Sox. The Rays competing and finding success over the last three years could be viewed as hopping on the bandwagon.

All of these circumstances contribute both directly and indirectly to the Rays’ apparent payroll flexibility. They may very well be generating more revenue than meets the eye. Besides, winning captivates fans across the globe on its own.

Tampa Bay Rays will trade Austin Meadows within the next year

Despite the potential money avenues of late, the Rays are still not a rich team, comparatively speaking, and their stat-crunching, roster balance approach isn’t changing. Tampa Bay is going to make plenty of trades in the coming years, and the one with the most significance will be them moving outfielder Austin Meadows.

Yes, Meadows flat-out rakes from the left side and has been the team’s most dangerous hitter over the last three seasons. He’s also coming off another regular season where he demolished pitches and was an integral source of offense for the Rays.

At the same time, no one is immune to movement on this team. Meadows is three years away from free agency. What other now-former Ray was three years away from free agency when he was traded? Left-hander Blake Snell. Tampa Bay dealt the homegrown southpaw to the San Diego Padres last offseason for a combination of highly regarded young players. Two of those players, Luis Patino and Francisco Mejia, were part of the Rays’ 2021 roster. They went on to have the best record in the AL.

The Rays have enough outfielders to be sufficient in the grass next season or in 2023 (Randy Arozarena, Kevin Kiermaier, Manuel Margot, Brett Phillips and potentially Josh Lowe). They’ll move Meadows for a combination of enticing young players who will be on the big-league team within 12 months of arrival.

As impactful of a hitter as he can be, the Rays have their limitations on Meadows. For instance, he would sit on a reasonable basis against left-handed pitchers last season and has often served as a designated hitter. Furthermore, he wasn’t in the starting lineup for two of the Rays’ four games against the Red Sox in the AL Divisional Round.

A team with a low budget, no matter the potential uptick they may have behind the scenes, can’t afford to pay several players $20-plus million salaries. Snell, Longoria, Ben Zobrist, Willy Adames, David Price and James Shields among others were no exceptions.

Tampa Bay Rays think they have a superstar in Wander Franco

At the end of the day, no team, let alone one in the Rays’ situation is giving a player a contract of this magnitude unless they feel they have a superstar on their hands. The Tampa Bay Rays think they have a franchise player in Wander Franco.

By the way, we’re talking about a player with a combined 74 regular season and postseason appearances. That’s how quickly they gave him this contract. Franco lived up to the hype in his first season with the Rays. At the plate, he showcased an ability to make considerable contact, get on base at a high level and find success from both sides of the plate

Meanwhile, he flashed some leather in the field. Franco was stellar as the Rays’ primary shortstop, serving as a sturdy fielder and posting 6 DRS at the middle infield position. He also dabbled a bit at third and second base.

It’s rare to see an extension for a player after a mere season in the show, but that’s the way the Rays value Franco. He’s so special in their eyes that they went against their contractual inclinations to an extreme degree. Franco is to the Rays what Mike Trout, Jose Altuve, Juan Soto, Fernando Tatis Jr. and other star players are to their respective teams.

Premier shortstop play is special and difficult to duplicate even in an elite player development program. Franco’s MLB career is brief to date. That said, his first licks at the big-league game were smooth with little to no gaping weakness. He can only get better from a production and impact standpoint.

Tampa Bay feeling an urgency to get this deal done roughly five months after Franco made his MLB debut speaks volumes: they think he’s that special.