Los Angeles Rams head coach Sean McVay is the latest big name from within the sport that is voicing their displeasure on the hiring of elite minds of color for NFL head coaching jobs.

Aside from the ongoing and ugly scandals the NFL is dealing with and investigating with the Washington Commanders, the league has a crisis of color when it comes to head coaching gigs. The creation of the “Rooney Rule” was supposed to help bring greater opportunity for coaches of color, and gender, on staffs throughout the league.

However, that is a point of contention in former Miami Dolphins head coach Brian Flores’ lawsuit against the league and three of its team. Since the suit was filed, two coaches of color have since been given the top spots for a couple of franchises, however, those came with caveats.

Lovie Smith was promoted to head coach for the Houston Texans despite an 89-87 career record and strong and fresh candidates available in the league. Todd Bowles was also an in-house hire in Tampa Bay after head coach Bruce Arians retired and the team was able to use a loophole in the “Rooney Rule” that did not require interviews for candidates of color after March 1.

Yet, despite a March amendment to the rule where all 32 clubs must employ a female or a member of an ethnic or racial minority to serve as an offensive assistant coach it still doesn’t seem like talented coaching candidates are getting the opportunities they deserve. Rams coach Sean McVay feels he has one on his staff in defensive coordinator Raheem Morris. 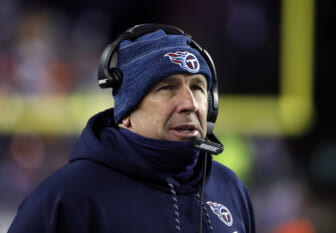 The former Tampa Bay Buccaneers head coach and one-time Atlanta Falcons interim head coach was a key part of the Rams’ run to and win in Super Bowl LVI. In a recent comment to the Associated Press that was tweeted by reporter Greg Beacham, McVay considered it downright criminal that Morris has not gotten another chance to lead an NFL team.

“It’s a reflection of how far we have to go because he’s one of the best coaches in the world, and the fact that he isn’t a head coach is a crime,” McVay said.

Morris has amassed a 21-38 record in nearly four full seasons leading the Bucs and Falcons. He also served as a defensive coordinator with both of those franchises as well.