The Houston Texans coaching search is over with Lovie Smith replacing David Culley as head coach. Now that a winding and bizarre hunt for the next leader of the franchise is over, the organization can get to work on the next stage of its rebuild.

There is still a lot of work to be done this spring. A Deshaun Watson trade is coming and the return Houston will receive can provide incredible value for an organization with no choice but to build through the NFL Draft. But Watson isn’t the only player who should be put on the trade block. Anyone on the current roster who generates interest across the league, general manager Nick Caserio should take those calls.

Fans should rightfully still feel uncertain about this process. While Caserio is a respected executive, former chaplain and character coach Jack Easterby seems to be the most trusted ally of owner Cal McNair. It’s a significant concern for the future, but the only focus this spring can be building a core for the future.

Here are the next four offseason moves the Houston Texans need to make.

Houston Texans quarterbacks coach Pep Hamilton is coveted across the league. The Carolina Panthers wanted to interview him for their offensive coordinator gig, but he declined. He’s also a target of new Jacksonville Jaguars coach Doug Pederson. But with Lovie Smith taking over in Houston, a promotion for Hamilton is perfect. 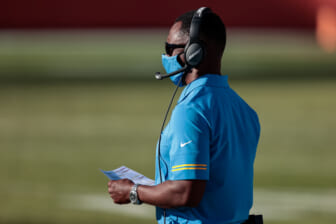 The 47-year-old assistant served as the Los Angeles Chargers quarterbacks coach in 2020. Under Hamilton’s tutelage, Justin Herbert broke the NFL rookie records for passing touchdowns (31) and completions (396). After joining the Texans’ coaching staff in 2021, Hamilton proved that wasn’t all Herbert. He worked closely with third-round pick Davis Mills, helping the rookie quarterback throw for 2,664 yards with 16 touchdowns and an 88.8 QB rating.

Everywhere he goes, Hamilton proves that he’s one of the better offensive-minded coaches in the NFL and he does exceptional work with young passers. Since he’s willing to stay in Houston, the Texans would be foolish not to promote him to offensive coordinator.

Brandin Cooks generated plenty of interest before the NFL trade deadline and easily could have netted a quality pick for the Texans. But Houston kept him, insisting the No. 1 receiver was needed because of his on-field impact and his influence on team culture. Simply put, that’s not what rebuilding organizations need to do. The Texans must trade Cooks this offseason.

Coming off consecutive 1,000-yard seasons, Cooks would be a phenomenal No. 2 receiver in a great offense. He overcame bad quarterback play in 2021 and has now demonstrated that he can stay on the field, missing just two games since 2020. NFL teams looking for an explosive weapon who can stretch the field and offers some YAC ability would give up a Day 2 pick for Cooks and Houston’s rebuild is much better off by making that move.

We know the Texans won’t be drafting a quarterback with the No. 3 pick. Not only is the 2022 quarterback class not particularly strong, but Houston is also sold on giving Mills another year. So, that leaves Caserio with taking the best player available and the talent at the top of the 2022 NFL Draft is on the defensive side.

In a perfect world, Michigan edge rusher Aidan Hutchinson falls to Houston. But it’s highly unlikely Detroit passes on an impact defensive player who grew up near the region. The next best thing is Oregon defensive lineman Kayvon Thibodeaux. He offers prototypical size (6-foot-5,) and length with the explosive first step and athleticism to become a force at the next level.

In a worst-case scenario, if both are gone, Houston can draft Derek Stingley Jr. LSU’s cornerback didn’t quite match the hype from that phenomenal freshman season, but he has the makings of a No. 1 coverage weapon in the NFL. In a pass-heavy league, that will solve some of the Texans’ problems.

Smart general managers seize on great opportunities presented by desperate teams. The Carolina Panthers, more so than any other organization, badly want to upgrade at quarterback. The pressure is coming from the highest level with owner David Tepper eyeing Deshaun Watson as the franchise’s savior.

Some have theorized Christian McCaffrey as a trade chip Houston could receive, but it doesn’t need him. There’s no value in a rebuilding team paying nearly $45 million for a running back who keeps being sidelined by soft-tissue injuries. If the Panthers want to offload money, Houston can take Sam Darnold’s $18.858 million fully-guaranteed contract for the 2022 season in exchange for another Day 2 pick.

A deal could be structured fairly simple. Carolina receives Watson and future Day 3 selections, while the Texans acquire Darnold, three first-round picks, two second-round picks, three third-round picks and Terrace Marshall Jr. If all of this happens, it would be the perfect offseason for the Houston Texans.