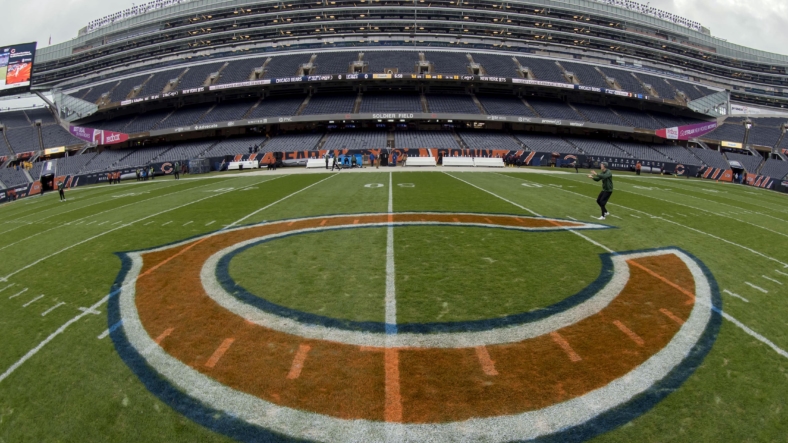 Chicago Bears kicker Cairo Santos may have been excited to kick on the newly-installed Bermuda grass at Soldier Field stadium, but after seeing the downpour of rain just hours ahead of kickoff, that excitement may be washing away.

The Bears are set to begin their season with the San Francisco 49ers in town for a Week 1 matchup at 1 PM ET today, and while they’ve spent weeks and months preparing, no one could have anticipated the weather in Windy City.

Sure, it’s Windy City, there are always some conditions to consider, but everyone envisions a perfect, sunny atmosphere on opening day.

Instead, it’s practically raining cats and dogs in Chicago, and it could lead into the start of the game. According to Weather.com, the Chicago area is currently in a flash flood warning, and storms are expected to continue until 5 PM ET, which is roughly an hour after the end of today’s matchup.

Needless to say, with the conditions of the field now in question, both 2021 first-round quarterbacks won’t have the start they were hoping for. It’s a tough situation with Justin Fields, the 11th overall pick from a year ago, needing a strong first impression to help turn around the outside perception of a team few expect much from in 2022.

Meanwhile, on the opposite sideline, the third overall pick from last year’s draft, Trey Lance, will be making just his third career NFL start on Sunday. He too will be feeling the pressure early on to match the current playoff expectations bubbling out of the Bay Area.

Of course, both teams do have above-average rushing attacks, and coach Kyle Shanahan loves to pound the rock, so maybe this falls right in line with San Fran’s gameplan, but still, the fans definitely want to see Lance uncork some air mail later today. We’ll see if the weather cooperates.