Why the Pittsburgh Steelers should meet Tyrann Mathieu’s asking price 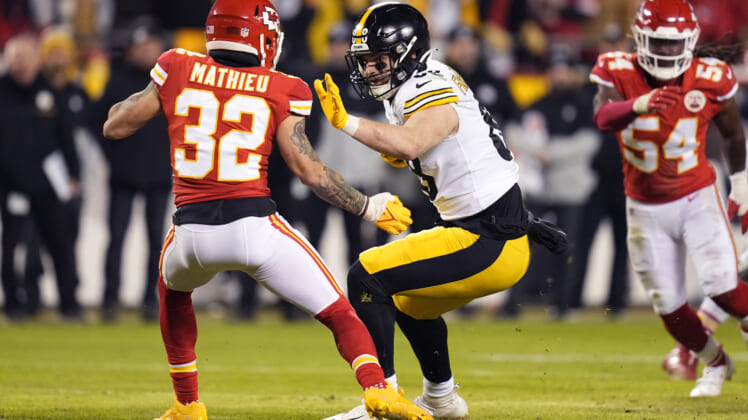 The Pittsburgh Steelers are going through an important offseason. One that’s seen Ben Roethlisberger retire, meaning for the first time in 18 years, the Steelers need a new quarterback. They may have found one with Mitch Trubisky, but defense has always been the heart and soul of this organization. Is their current unit strong enough to win the AFC? That’s where Tyrann Mathieu could potentially come into the picture, via free agency.

Somehow still available after three consecutive Pro Bowl or All-Pro seasons with the Kansas City Chiefs, the Honey Badger remains without a pot of gold. The Chiefs have moved on, by signing Justin Reid, which Mathieu has since said he too would have agreed to, if the offer was made. That contract was a three-year, $31.5 million deal.

Instead, a month after free agency started, Mathieu’s market remains cold. Sure, some teams have inquired, like his hometown New Orleans Saints, but there’s never been a strong indicator he will sign there or elsewhere. For the most part, teams seem content to let Mathieu wait, whether that means he’s asking for too much or if they feel his skills have diminished remains to be seen.

But, if you’re a team like the Steelers, who may not have a top-10 offense next season, shouldn’t you do everything possible to ensure the defense is built like steel? Once again, that’s where Mathieu may be able to help.

Steelers have shown interest in Mathieu, but are they willing to pay the price?

Like some others rumored to have interest in adding Mathieu to their roster, the Steelers have gotten involved with negotiations too. Bob Labriola of Steelers.com recently revealed the Steelers front office has reached out and would have interest in signing Mathieu, where they feel they can afford him on a two-year contract. Complicating matters of course is whether the player sees eye-to-eye on contract value with what the Steelers are comfortable offering.

This is obviously a big factor in any contract agreement. The Steelers currently have just under $15 million in cap space, which should be more than enough to sign Mathieu and their incoming draft class.

Whatever the disagreement is, it’s likely not over more than a few million. Which, at the end of the year could be the difference between getting blown out again by the Chiefs in the Wild Card, or advancing to the next round thanks to a few big plays by your new battle-tested safety.

Minkah Fitzpatrick and Tyrann Mathieu would be a problem

Combining Mathieu with Minkah Fitzpatrick, who’s also a playmaking safety would allow Mike Tomlin to show offenses several different looks, while boosting their secondary as a whole. As is, the cornerback and safety room need some work. They allowed the eighth-most passing yards per game a year ago and have done very little, aside from adding Levi Wallace to address the issue.

Mathieu could help solve their woes in a hurry and he wouldn’t get in the way of any potential draft plans to continue adding pieces to their depth chart either in the secondary or elsewhere. Any time you can add a talented piece with as many accolades as Mathieu, who still appears to be able to make an impact within your defense at age 29, you should do it.

Should the Steelers come to terms with the Honey Badger, they could then place a higher priority on putting together a better offensive line, and a more dangerous receiving corps, providing a better roster for Trubisky to get comfortable with his first season in town.

Adding the high-IQ, energetic Mathieu to a Tomlin-led defense would be a dream fit in Pittsburgh. It’s scary to even think about.