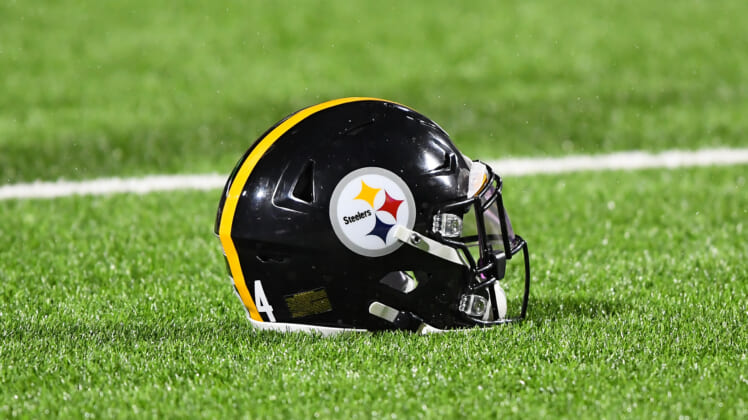 The Pittsburgh Steelers decision to sign former Chicago Bears first-round bust Mitchell Trubisky rather than trade for an heir-apparent to recently-retired quarterback Ben Roethlisberger has this team in a precarious position.

Outging general manager Kevin Colbert might have to trade up in the 2022 NFL Draft to land that franchise quarterback. The backdrop here is a Steelers brass that still thinks it can contend for a playoff spot in 2022 and moving forward.

With seven selections in the 2022 NFL Draft, we look at three ideal Pittsburgh Steelers trade scenarios during the annual event in Las Vegas later this month.

Pittsburgh could use an additional pick or two in the draft. The idea is to walk the tight rope between short-term contention and long-term relevance. If so, moving an impending 2023 free agent in that of cornerback Cameron Sutton could make sense during the annual event.

The Steelers re-signed Ahkello Witherspoon in free agency and added another starter in that of Levi Wallace from the conference-rival Buffalo Bills. The also have Justin Layne to fill the slot corner duties. Sure adding another corner in the draft should be in the cards. But there might not be any room for Sutton after some major struggles in 2021.

This came after Sutton yielded a mere 79.8 passer rating in part-time duties for the Steelers in 2020. The former Tennessee standout is still only 27 years old and could net Pittsburgh a mid-round pick and change.

Pittsburgh lost wide receivers JuJu Smith-Schuster and James Washington in free agency — creating a depth void on the roster. Chase Claypool is a decent target despite a down 2021 season. Meanwhile, Diontae Johnson broke out to the tune of 1,161 yards as a third-year player in 2021.

Even then, adding a slot guy to go with those two makes sense. That’s where Reagor comes into play. The former first-round pick from Texas Christian has struggled in two seasons with Philadelphia and could potentially be had in a trade. Why not see if a change of scenery will do him well by offering up a mid-round pick to the in-state rival Eagles?

Related: A look at the top 2022 NFL Draft prospects

Pittsburgh Steelers trade up for a quarterback

Selecting 20th overall, Pittsburgh isn’t necessarily in a great position to add one of the few first-round prospects in the 2022 NFL Draft. It could be forced to reach for someone like North Carolina’s Sam Howell. That wouldn’t be an ideal scenario in Colbert’s final draft as the Steelers general manager.

Instead, the highly-respected front office head uses future draft capital as his Pittsburgh Steelers trade up for someone like Liberty’s Malik Willis or Kenny Pickett from the Pitt Panthers. Perhaps, Desmond Ridder becomes an option. These Steelers have shown interest in the former Cincinnati star throughout the pre-draft process.

Pittsburgh has kicked this quarterback situation down the road for far too long. Trubisky is not the long-term solution. It’s now time that the Steelers bite the bullet and trade up for a potential franchise quarterback. It’s that simple.