This is a big year in Philadelphia. Following a first-round playoff exit, the front office took an aggressive approach this offseason to significantly improve the roster. A lack of talent isn’t going to be the Eagles’ problem in 2022, they have the pieces on both sides of the ball to potentially win the NFC East.

The 2022 season will come down to whether or not a few people in the organization step up to the challenge ahead of them. If they do, this could be a sleeper Super Bowl pick. If they don’t, an answer we might get a few signs of in training camp, Philadelphia’s fans will rightfully want change.

Let’s dive into everything you need to know about Philadelphia Eagles training camp 2022.

Philadelphia Eagles training camp begins on July 26 with all players reporting for mandatory practices. Any player who is an unexcused holdout will be fined $50,000 per day. While the full training camp schedule hasn’t been released, it will likely range from July 26 to the final week of August.

The Eagles will also be holding joint training camp practices this year. In March, Philadelphia announced it will hold two joint practices with the Cleveland Browns before their preseason game.

It’s not the only joint practice Philadelphia will hold with another NFL team. Eagles training camp will also feature practices with the Miami Dolphins, right before their preseason game on Aug. 27. 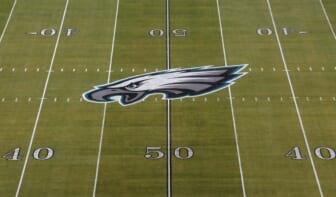 Here is the history of Philadelphia Eagles training camp locations in recent years, per Pro Football Reference. Practices will once again be held at the NovaCare Complex in 2022.

Can you go to Eagles training camp?

Fans can attend one Philadelphia Eagles training camp practice this year. The team announced in June that they will hold a public practice for fans in attendance at Lincoln Financial Field on Sunday, Aug. 7 at 7 pm.

All ticket proceeds from the lone public practice will be donated to the Eagles Autism Foundation. The foundation helps provide funding for autism research and care programs. Since being founded in 2018, it has funded 63 research projects and raised more than $4 million, per NBC Sports Philadelphia.

Here are the top storylines and Eagles’ position battles to follow in training camp this summer, including the pressure on quarterback Jalen Hurts and the questions at safety.

Is Jalen Hurts ready to be a franchise quarterback?

Philadelphia committed to Hurts as its starting quarterback last season, using 2021 as an evaluation year for the second-year passer. He showed promise, finishing 8-7 as a starter with a 16-9 TD-INT ratio and delivered in some big moments. However, the front office and coaching staff need more to determine if he can be the franchise quarterback.

A lack of surrounding talent won’t be an excuse in 2022. Hurts will start behind an elite offensive line, providing him with plenty of time to throw from a clean pocket. On top of that, he now gets to spread the ball around to A.J. Brown, DeVonta Smith, Zach Pascal and Dallas Goedert. The pieces are in place for a top-10 NFL offense in 2022.

It all comes down to Hurts. As Bleeding Green Nation detailed, the 23-year-old looked outstanding in OTAs and there is plenty of buzz heading into training camp. However, all of that work comes without a ton of spotlight. All eyes and cameras will be on Hurts moving forward and whether we see the playoff version (2 INTs, 60.0 QB rating) or early 2021 version (91.9 QB rating) will determine Philly’s season.

Concern at safety for Philadelphia Eagles

The Eagles strengthened their defense this offseason, largely in the front seven. One position in the secondary they did address was cornerback, signing James Bradberry to serve as the ideal No. 2 cornerback opposite Darius Slay. With Avonte Maddox in the slot, Philly’s cornerback trio is something the coaching staff can feel confident about.

Things aren’t as simple at safety. While Anthony Harris is back, the NFL interceptions co-leader in 2019, didn’t make a strong impression in his first year with the Eagles. If the veteran safety repeats his issues in coverage (93.3 passer rating allowed) and as a tackler (seven missed tackles), that’s a problem. There are also no guarantees. Marcus Epps, a 2019 sixth-round pick, is also a limited starter. Lacking impact talent at safety, the lack of consistency from K’Von Wallace also makes this a thin positional group.

One thing the coaching staff can feel good about heading into July is the state of the roster. Of the 22 starting spots on both sides of the ball, nearly everyone is settled. The only spot where we might see competition is at right guard.

Isaac Seumalo is a strong favorite to earn the starting nod. He saw limited snaps (168) in 2021, but Pro Football Focus credited him with just one pressure allowed and he earned an 82.9 pass-blocking grade. With the Eagles looking for the best five to protect Hurts, Seumalo seems like the best option.

We mentioned that the Eagles’ front office eliminated any potential excuses for Hurts in 2022. The same can be said for Gannon, who now gets a war chest of defensive talent to make his scheme work. For a young coach who seems to be on the NFL radar for head-coaching interviews, this is a crucial year.

It’s worth monitoring because while this unit impressed at times, there were also real problems. In terms of getting after the quarterback, Philadelphia ranked 22nd in pressure rate (24%). It also couldn’t consistently get off the field, allowing the 10th-highest conversion rate (42.9%) on third downs. On top of all that, Eagles’ opponents scored a touchdown on 66.15% of their red-zone trips.

Howie Roseman signed Haason Reddick and James Bradberry to strengthen the pass defense. He also drafted Jordan Davis and brought back Fletcher Cox, solidifying the run defense. If all of that isn’t enough, rookie linebacker Nakobe Dean could be a missing piece in the middle if he’s healthy. Gannon should have all the talent he needs to create a great defense.