Odell Beckham Jr. appears increasingly unlikely to suit up for the Cleveland Browns on Sunday after reportedly being excused from a second consecutive day of practice Thursday.

SportsBetting.ag has established an entire market around the wide receiver, including -1000 odds that he will not play against the Cincinnati Bengals (5-3) compared to +550 that he will.

Head coach Kevin Stefanski told reporters Wednesday that general manager Andrew Berry is engaged in talks with Beckham’s representatives. If Beckham is released by the Browns, SportsBetting.ag has installed the Las Vegas Raiders (+350) and the Baltimore Ravens (+400) as his most likely destinations. 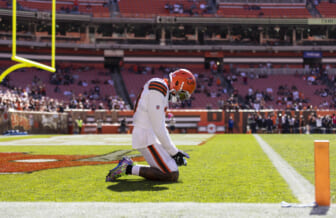 The Raiders are suddenly in need of a playmaking wide receiver with Henry Ruggs III facing felony DUI charges following a fatal car accident this week. Ruggs, who leads Las Vegas with 469 receiving yards on 24 catches (19.5 yards per reception), was released on Tuesday.

The Ravens have a similar big-play weapon in Marquise Brown, who leads Baltimore with 566 yards and six touchdowns on 37 catch (15.3-yard average). But Baltimore’s next leading wideout is Sammy Watkins with 292 yards on only 18 catches while missing two games due to injury.

The next shortest odds belong to the New Orleans Saints, with former All-Pro wide receiver Michael Thomas announcing this week that he will not return this season due to a setback in his recovery from ankle surgery. The Saints have been a run-first offense this season, with Marquez Callaway leading the receiving corps with just 284 yards on 19 receptions.

New Orleans is also without quarterback Jameis Winston for the remainder of the season due to a torn ACL. The team’s second-leading receiver is Deonte Harris with 271 yards on 15 receptions.

The NFL trade deadline passed Tuesday, the same day Beckham’s father ignited a social media firestorm by posting a video on Instagram of Browns quarterback Baker Mayfield failing to connect with his son on passing plays.

Beckham is a three-time Pro Bowl selection, however he finished with just one catch for 6 yards in Cleveland’s 15-10 loss to the Pittsburgh Steelers last Sunday. He has 17 catches for 232 yards with no touchdown receptions in six games this season. 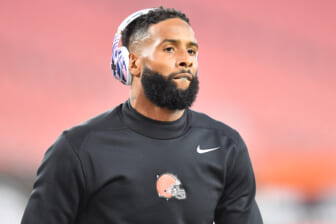