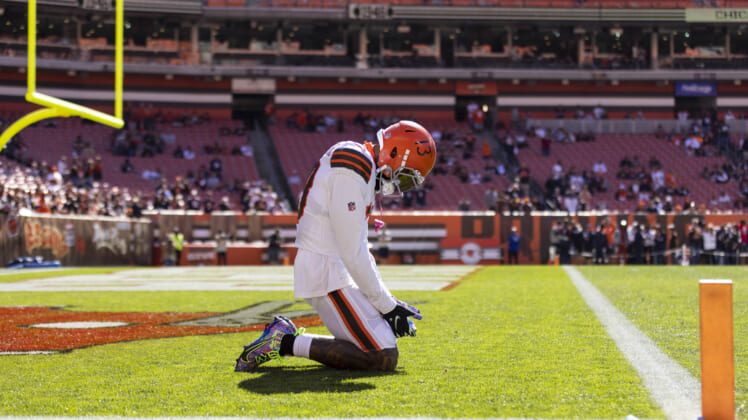 Former Cleveland Browns star receiver Odell Beckham Jr. has now been a free agent for well over a day. While there’s been some rumors about potential landing spots, recent reports indicate that the three-time Pro Bowler is going to take his time making a decision.

Despite struggling to the tune of 17 receptions for 232 yards in six games this season, OBJ has drawn a ton of interest. Here’s a dude who put up five 1,000-yard seasons in his first six years before suffering through an injury-plagued 2020 campaign. Below, we look at the five best fits for OBJ in NFL free agency.

There were rumors leading up to the deadline that Green Bay might show interest in Beckham. The team lacks at wide receiver behind Davante Adams. In fact, Randall Cobb is second among Packers receivers with 20 catches through nine games. That’s just not going to cut it.

In an attempt to pacify enigmatic quarterback Aaron Rodgers, Green Bay takes a chance that OBJ can turn his career around for a championship contending team. Of all the options, this might make the most sense. Whether the receiver takes Green Bay’s initial offer of the league minimum remains to be seen.

Fresh off a two-game losing streak, the 5-4 Bengals might need a shot in the arm. Sophomore quarterback Joe Burrow has also struggled to the tune of three touchdowns against three interceptions during this two-game span.

Imagine the Bengals providing Burrow with another top-end weapon to go with likely NFL Offensive Rookie of the Year Ja’Marr Chase. As for OBJ, he’d love to stick it to the Browns by signing with their in-state and division rivals.

The Patriots are also in the midst of a surprising season with a 5-4 record. The rebuilding team is also tied with four other squads for the final playoff spot in the AFC. Meanwhile, Mac Jones has performed extremely well as a rookie. He’s completing 68% of his passes for 2,135 yards with 10 touchdowns and seven interceptions.

With that said, New England doesn’t have a truly elite receiving option. Slot guy Jakobi Meyers leads the team with 46 receptions. After than, Kendrick Bourne is second among Pats receivers with 29 catches. Adding OBJ would help a whole heck of a lot here, as evidenced by the Pats’ reported interest in him.

The idea of teaming OBJ up with stud receivers D.K. Metcalf and Tyler Lockett might be too hard for head coach Pete Carroll to pass up on. In fact, Seattle is one of the teams that has been linked to the star pass-catcher since he hit the open market.

Set to return Russell Wilson from injury this week against the Green Bay Packers, Seattle sits at a mere 3-5 on the campaign. However, it remains in the battle for a playoff spot. With no real way to improve a struggling defense, Seattle could double don on offense by creating one of the best wide receiver trios in the NFL.

Related: Everything you need to know about 2021 NFL season

Prior to Odell Beckham Jr. being dealt from the New York Giants to Cleveland, San Francisco thought it had a deal in place with the stud pass-catcher. Unfortunately, the Giants didn’t want to move him to an NFC rival. Now, years removed from that, could something be in the cards here?

While Deebo Samuel is on pace to break Calvin Johnson’s single-season receiving yards mark, there’s a whole lot to be desired behind him on San Francisco’s depth chart. Brandon Aiyuk is second among 49ers receivers with 19 catches. That’s not going to cut it if the 49ers want to overcome early-season struggles and earn a playoff spot.