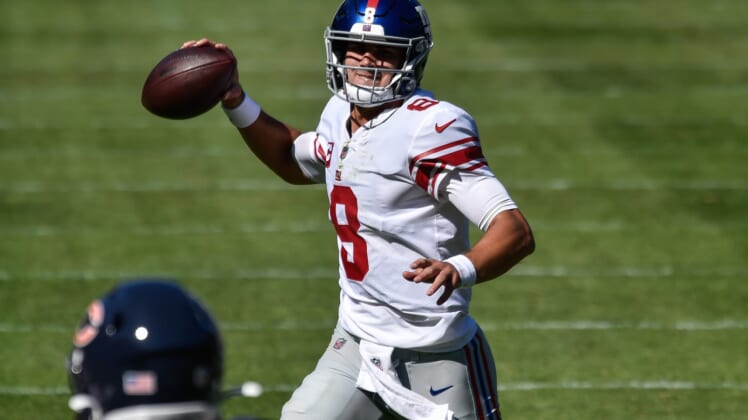 Sunday’s Week 2 action around the NFL world could very well have changed the landscape of the 2020 season on a dime. Multiple season-ending injuries to star players acted as a backdrop to the action.

Heading into Week 3 of the NFL season, there’s now a whole heck of a lot to look at. The slate will start with the Miami Dolphins hosting the Jacksonville Jaguars and will conclude with a potential AFC Championship Game preview between the Chiefs and Ravens.

In between, the Houston Texans and Philadelphia Eagles will look to earn their first wins of the season after major struggles through the first two weeks. It’s in this that we give you NFL Week 3 odds and point spreads with a one liner for each matchup.

Oh boy. Kirk Cousins has been absolutely brutal through the first two games of the 2020 season, throwing four interceptions for the winless Vikings. This past week against Indianapolis, Cousins put up 95 net passing yards and three interceptions. Minnesota’s defense has also yielded 35.5 points per game. Add in Ryan Tannehill’s Week 2 performance, and there’s no reason to opt for either the Vikings at +2.5 or the under (49.5).

NFL Week 3 injury report: A.J. Brown out for the Titans

Let’s give Cam Newton credit where it’s deserved. The dude almost literally led New England to a comeback win over Seattle on Sunday night. He had no help from his running backs. New England’s defense was torched by Russell Wilson and Co. But in the end, Newton went for 444 total yards and three touchdowns. As for the Raiders, they are coming off a shocking upset win over the Saints. Even then, I like New England here (minus the points).

NFL Week 3 injury report: Henry Ruggs out for the Raiders

The Atlanta Falcons held a 39-24 lead over the Dallas Cowboys with under five minutes to go in the fourth quarter in Week 2. Somehow, Dan Quinn’s squad lost the game by the score of 40-39. Through two games, Atlanta has yielded north of 770 passing yards and eight total touchdowns to quarterbacks. Shockingly, Mitchell Trubisky has his Bears at 2-0 and has thrown five touchdowns compared to two interceptions. Something has to give here, right?

Just ouch. Philadelphia’s defense was shredded in Week 2 during a humiliating 37-19 home loss to the Los Angeles Rams. Jared Goff and Co. tallied 30 first downs and 449 yards of offense. That came after the Washington Football Team put up an amazing comeback against Doug Pederson’s squad in Week 1. As for the Bengals, Joe Burrow is coming off a 316-yard, three-touchdown performance in just his second NFL start. Philadelphia has come down from 6.5-point favorites.

The numerous injuries San Francisco dealt with in its blowout win over the New York Jets in Week 2 really has not impacted the odds too much. That likely has to do with the torn ACL Saquon Barkley also suffered in New York’s loss to the Chicago Bears. Even with Nick Mullens starting for the injured Jimmy Garoppolo here, take the 49ers and the points as well as the over.

Including their divisional playoff loss to the Chiefs last season, the Texans have given up an average of 39.3 points per game over their past three outings. It has some questioning whether Bill O’Brien should be long for the job in Houston. As for the Steelers, they are averaging 26 points per game through the first two weeks of the 2020 season. The four-point spread makes sense. However, I am not too sure Deshaun Watson and the Texans’ offense stands much of a chance against an elite Pittsburgh defense. Take the under.

This one is somewhat of a shocker given that Cleveland narrowly defeated Cincinnati last Thursday and was destroyed by a vastly superior Baltimore Ravens squad in Week 1. With that said, Washington’s performance in a blowout Week 2 loss to the Arizona Cardinals has to be taken into account here. I’d still go with Cleveland covering. Four of the team’s six wins last season came by double digits.

Los Angeles’ 37-point outing in Week 2’s win over the Eagles represented the 20th time since the start of the 2018 season that Sean McVay’s squad has dropped 30 or more points in a game. As for the Bills, the 30 points they yielded against Jacksonville in Week 2 is the most they have given up since Week 8 of the 2019 season. In fact, Sean McDermott’s defense has only given up 30-plus points two times since Nov. 4 of 2018. Something will give in this one.

Carolina’s young defense continues to be eaten alive. This unit has now given up 65 points in two games. More than anything, it’s the running backs who have done damage here. Josh Jacobs and Leonard Fournette put up five combined touchdowns in the first two games. This should mean a big day for Austin Ekeler, even if rookie Justin Herbert is forced to start under center.

New York’s defense is giving up an average of 29 points per game through two weeks. Head coach Adam Gase obviously isn’t happy about this following Week 2’s blowout loss to an injury-plagued 49ers team. That game saw San Francisco go for 182 yards on the ground while averaging 6.3 yards per rush. Jonathan Taylor should eat here with Marlon Mack lost for the season. The rookie from Wisconsin gained 101 yards on 26 attempts against Minnesota in Week 2. That should be enough for the Colts to cover against a bad Jets squad.

Get on the Kyler Murray MVP train before it is at capacity. The second-year quarterback put up 353 total yards and three touchdowns in a blowout win over Washington in Week 2. He’s now put up nearly 700 total yards en route to leading the 2-0 Cardinals to an average of 27 points per game. As for the Lions’ defense led by Matt Patricia, it’s not good. Aaron Jones torched this unit for north of 230 total yards in Week 2’s blowout 42-21 Packers win over Detroit. You can do the math from here. Take Arizona and the points.

Whew. This could very well be a barn burner. Russell Wilson has now put up nine touchdown passes and one interception in two games for the undefeated Seahawks. On the other hand, Dak Prescott has tallied north of 700 passing yards in two games. Meanwhile, both defenses continue to struggle. Even with the total points set at 56, take the over and don’t think twice.

Injuries on top of injuries. That is what has defined Denver’s 0-2 start to the season. Most recently, starting quarterback Drew Lock went down with a shoulder injury and is expected to miss multiple weeks of action. Pro Bowl running back Phillip Lindsay remains sidelined with turf toe. This is why it’s so surprising that Tom Brady’s squad is a six-point favorite after Tampa Bay’s win over Carolina in Week 2. Take the Bucs and the points here. Go with the over, too.

A potential NFC Championship Game preview, the Packers are clicking on all cylinders as they head to the Bayou. Here’s a team that has dropped 42 or more points in each of its first two games. When it’s not Aaron Rodgers dominating through the air, Aaron Jones is doing his thing on the ground. New Orleans as a three-point favorite is appealing here. However, we must take into account just how great Green Bay has looked in Matt LaFleur’s second season calling the shots.

NFL Week 3 injury report: Michael Thomas out for the Saints

Points. Points. Points. Sure the Ravens have looked tremendous on the defensive side of the ball. Sure it took the defending champion Chiefs a late field goal to defeat the Chargers Sunday afternoon. That’s all fine and dandy. But a 53.5-point over/under in a game featuring the past two NFL MVP winners makes no real sense. Take the points and don’t think twice about it.