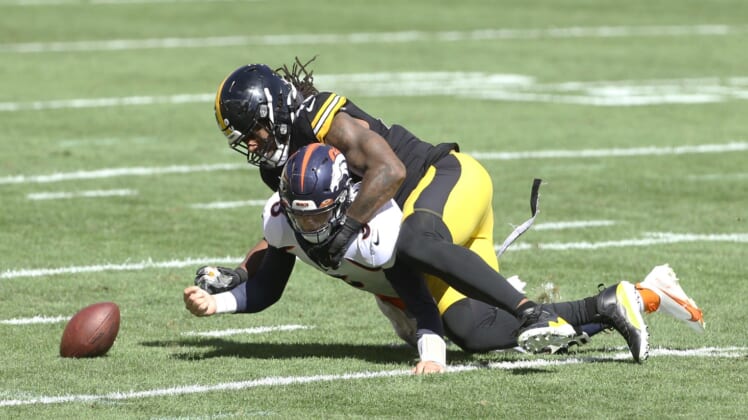 According to ESPN’s Adam Schefter, Lock suffered a sprained AC joint in Sunday’s loss to the Pittsburgh Steelers. Depending on the severity of the sprain, Lock will miss between 2-6 weeks. Jeff Driskel completed 18-of-34 passes for 256 yards with two touchdowns and one interception in Lock’s stead Sunday.

The start of Week 2 around the NFL has been filled with injury after injury to star players. It really is an ugly look for the league after a lack of preseason games due to the COVID-19 pandemic.

We now have another potentially serious injury to report. Second-year Broncos quarterback Drew Lock exited Sunday’s game against the Pittsburgh Steelers with a shoulder injury.

As you can see in the video, Lock landed awkwardly on his throwing shoulder after being hit. It did not look great. In his stead, Jeff Driskel was called on to be the Broncos’ quarterback against one of the best defenses in the NFL.

For Denver, this is just a continuation of major injury issues during the early part of the 2020 season.

During last week’s loss to Tennessee, Pro Bowl running back Phillip Lindsay suffered a foot injury. It’s being considered turf toe, and he’s out of action on Sunday. Meanwhile, recent acquisition and fellow Pro Bowler A.J. Bouye is currently on injury reserve with a shoulder injury.

Injuries have impacted a lot of teams at this early stage in the 2020 NFL season. However, the Broncos are among those most impacted. The hope here is that Lock’s injury is not too severe. The former second-round pick is coming off a good rookie season and is expected to take that next step as a sophomore.

As for Driskel, the former sixth-round pick of the San Francisco 49ers has thrown 10 touchdowns compared to six interceptions in eight career starts since entering the league back in 2016. He’s seen as nothing more than a career backup after struggling in a part-time starting role for the Bengals last season.