Our NFL picks against the spread have returned for Wild Card Weekend. There’s six games on slate over the three-day span as the NFL Playoffs get going.

We’re not going to be foolish and pick the two teams that are huge favorites heading into this one. We’re talking about the Buffalo Bills and San Francisco 49ers, who are taking on inferior opponents and have major home-field advantages.

Rather, the focus will be on games with smaller point spreads. That begins Saturday night with the Jacksonville Jaguars finding themselves as home underdogs against the Los Angeles Chargers.

Here, we give you our NFL picks against the spread for Wild Card Weekend that are worth your while.

Jacksonville had earned all off three playoffs appearances in the 22 years heading into this season with a combined two wins to its name. We’re fully expecting TIAA Bank Field in Duval to be absolutely rocking once Saturday night comes calling.

Will this be enough for the Jaguars to pull off a home upset over Justin Herbert and the Chargers? We’re banking on it. Jacksonville is in the midst of a five-game winning streak in which the team is outscoring its opponents by an average of two touchdowns per outing. Trevor Lawrence has also been on an absolute roll as of late. 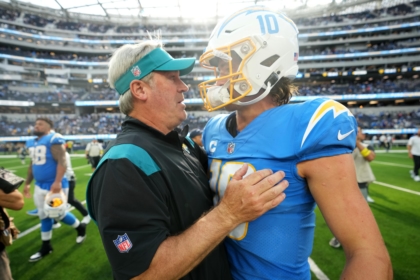 The Chargers find themselves in a different boat. Head coach Brandon Staley was under fire for playing his starters in a meaningless Week 18 game against the last-place Denver Broncos, only to lose the game by the score of 31-28. Staley’s in-game coaching decisions have also come under fire in recent weeks. It’s a problem. All of that leads us to believe Jacksonville will advance out of the NFL Wild Card round.

Let’s not even look at last week’s game against whoever the Chicago Bears threw out there at quarterback. In short, these Vikings have been on a path to early playoff elimination over the course of the past five weeks.

It started with an ugly 34-23 loss to the Detroit Lions back in Week 14. Minnesota then took advantage of the Indianapolis Colts’ junior varsity roster and coaching staff to pull off the greatest upset in NFL history the following week. But must we be reminded that the Vikes were down 33-0 at halftime in that game? Let’s not even talk about a 41-17 blowout loss to the Green Bay Packers in Week 17 with the No. 2 seed in the NFC on the line.

The moral of this story is that there’s a reason a 13-win Minnesota team finds itself as mere three-point home favorites against the 9-7-1 Giants.

From New York’s perspective, there’s a whole lot to like about this matchup. Brian Daboll’s squad led 13-10 heading into the fourth quarter of its Chrismas Eve matchup against the Vikings in Minnesota. It has already proved to have an ability to play in the not-so-friendly confines of U.S. Bank Stadium.

With just three wins since late-October, a lot of people are ruling the Giants out in this one. Primarily, there’s been major issues on the offensive side of the ball led by Daniel Jones. What we do know is that Minnesota’s defense is nothing to write home about.

It gave up north of 123 rushing yards per game during the regular season. Opposing running backs also put up the ninth-most receiving yards against this unit. Look for Saquon Barkley to do his dual-threat thing en route to leading New York to the biggest upset of the Wild Card round.

Tom Brady has won 35 career playoff games, including five in his first two seasons with the Buccaneers. Coming off an ugly Week 18 loss to the Washington Commanders, Dallas has won a total of three playoff games since the end of the 1996 season when Brady was in his freshman season with the Michigan Wolverines. There’s a history here we simply can’t ignore.

Sure Dallas won four more games than the Buccaneers during the regular season. Its body of work was much more impressive. We’re just having a hard time picking against Tom Terrific in what could potentially be his final game.

There’s also something to be said about NFL home-field rules for the playoffs. As noted above, the Bucs won four fewer games than Dallas. But by virtue of taking the NFC South, they have home field in this one. The Cowboys’ past three dates away from Big D have not been fun, including losses to the Jacksonville Jaguars and aforementioned Commanders.

We also must take into account the performance of one Dak Prescott recently. He’s turned the ball over a whopping 12 times over the past seven games. Without a postseason win on the road since defeating the San Francisco 49ers in the 1994 NFC Championship Game, we’re just not seeing a path to victory for Dallas here.

For full disclosure, here’s our NFL picks during the final five weeks of the regular season.