The Los Angeles Chargers and Jacksonville Jaguars will do battle in Duval Saturday night in the AFC Wild Card Playoffs. For Los Angeles, this road date comes after it finished the regular season with a 10-7 record.

The upstart Jaguars earned the AFC South title with a home win over the Tennessee Titans Saturday night. Trevor Lawrence and Co. head into the wild card round winners of five consecutive games and will be making just the franchise’s second playoff appearance since 2007.

One of the obvious storylines here is a battle between two young signal callers who were recent early first-round picks. This promises to be an electric atmosphere in Duval with that seems to be an even matchup between the two up-and-coming clubs. Below, we provide you with four bold predictions for the Chargers and Jaguars on NFL Wild Card Weekend.

Lawrence finished his second regular season having thrown three-plus touchdowns in three of his final seven starts. That included a four-game span from Weeks 12-15 in which the former No. 1 overall pick tossed 11 touchdowns against one interception.

The moral of this story is pretty simple. Lawrence has played absolutely elite football after struggling over the course of his first 22 career starts (20 TD, 21 INT).

Despite ranking in the bottom third of the NFL in points allowed, Los Angeles’ defense saw a strong performance from its secondary in the regular season. Opposing quarterbacks threw only 24 touchdowns in 17 games. The likes of Pro Bowl safety Derwin James (75.6 QB rating allowed) and young cornerback Asante Samuel Jr. (55.3% completion allowed) were primary reasons for this.

Even then, we like the momentum Lawrence is bringing into this game. Jacksonville is averaging nearly 30 points per game in its past four home dates. That span has seen Lawrence throw 10 touchdowns against one interception. Expect another big time performance from the Jacksonville Jaguars star in the AFC Wild Card Playoffs.

To say that Ekeler was inconsistent at times during the regular season would be an understatement. He put up less than 40 rushing yards a total of nine times. It led to a Chargers rushing attack that ranked 30th in the NFL at under 90 yards per game.

Herbert will have to get more balance against a Jacksonville Jaguars defense that held opposing quarterbacks to an 89.1 passer rating during the regular year. He’ll also need to rely on Ekeler in the passing game.

This leads us to believe Ekeler will touch the ball at least 20 times after reaching that plateau eight times in the regular season. He should also have plus-level matchups against linebackers Foyesade Oluokun and Devin Lloyd if Chargers offensive coordinator Joe Lombardi is able to put Ekeler in mismatches throughout the game.

Los Angeles Chargers head coach Brandon Staley rightfully received flack for playing his starters during a meaningless Week 18 game against the Denver Broncos. Like clockwork, Bosa exited due to an injury in just his second game back since suffering a groin injury back in Week 3.

The good news? This latest scare doesn’t seem to be too serious. Bosa will be able to go once the AFC Wild Card Playoffs kick off Sunday evening in Duval.

This isn’t great news for Mr. Lawrence. Star left tackle Cam Robinson is out for the postseason due to a knee injury. It has moved the seldom-used Walker Little into the starting lineup. Despite his injuries, Bosa put up six quarterback hits and 2.5 sacks in just 165 defensive snaps during the regular year. We’re expecting the four-time Pro Bowler to absolutely eat in this one.

Jacksonville’s futility since the end of the Coughlin era back in 2002 is by now well known. The team earned three playoff appearances over the past 22 seasons ahead of clinching a spot back in Week 18. This span has seen the Jaguars win all of two playoff games.

But something seems different in Duval right now. Doug Pederson has brought experience and veteran confidence to the table, creating a great mix with the Jaguars’ youthful roster. We also would be foolish to discount the fact that Jacksonville has the clear coaching advantage.

Despite being a rare home playoff underdog, we’re going to boldly predict that the Jacksonville Jaguars take out the Los Angeles Chargers to open the AFC Wild Card Playoffs Saturday evening. 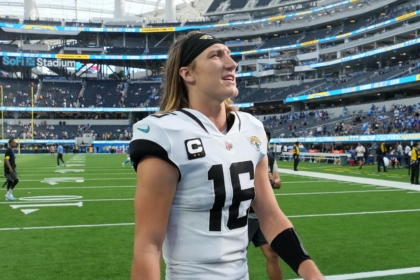