On the eve of NFL free agency officially opening up, a lot of the big name players are now off the board. This comes after a 48-hour league-sanctioned tampering period around the NFL.

We’ve seen some absolutely huge contracts signed thus far. However, a ton of big names remain on the board with the market officially set to open Wednesday afternoon.

In a press release obtained by Sportsnaut, the NFL laid out what to expect during free agency while answering some burning questions.

When does the 2022 free agency signing period begin?

When is the two-day negotiating period for potential unrestricted free agents?

From 12:00 p.m. ET on Monday, March 14 until 3:59:59 p.m. ET on Wednesday, March 16, clubs are permitted to contact and enter into contract negotiations with the certified agents of players who will become unrestricted free agents upon the expiration of their 2021 player contracts at 4:00 p.m. ET on March 16.

What are the categories of free agency? 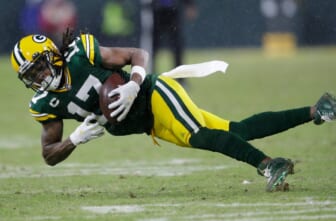 What is the time period for free agency signings this year?

What constitutes an “accrued season”?

Six or more regular-season games on a club’s active/inactive, reserve/injured, or reserve/physically unable to perform lists.

How do the free agency rules apply to restricted free agents?

If a player with three accrued seasons has received a “qualifying offer” (a salary tender predetermined by the Collective Bargaining Agreement between the league and its players) from his old club, he can negotiate with any club through April 22. If the restricted free agent signs an offer sheet with a new club, his old club can match the offer and retain him because the qualifying offer entitles it to a “right of first refusal” on any offer sheet the player signs.

If the old club does not match the offer, it may receive draft choice compensation depending on the amount of its qualifying offer. If an offer sheet is not executed on or before April 22, the player’s negotiating rights revert exclusively to his old club. In addition, prior to the start of free agency a player who would otherwise be a restricted free agent may be designated by his old club as its franchise player or transition player.

What is the right of first refusal/qualifying offer amounts for players who have completed three accrued seasons?

For the right of first refusal and compensation at the player’s original draft round, a one-year salary of at least $2,540,000 or 110 percent of the 2021 Paragraph 5 salary, whichever is greater.

For the right of first refusal and compensation of one second-round draft selection, a one-year salary of at least $3,986,000 or 110 percent of the 2021 Paragraph 5 salary, whichever is greater.

For the right of first refusal and compensation of one first-round draft selection, a one-year salary of at least $5,562,000 or 110 percent of the 2021 Paragraph 5 salary, whichever is greater.

For the right of first refusal and compensation of only one first-round draft selection, but any provision in the new club’s offer sheet waiving or limiting the new club’s ability to designate the player as a franchise or transition player is not a principal term and need not be matched by the prior club, a one-year salary of at least $6,062,000 or 110 percent of the 2021 Paragraph 5 salary, whichever is greater.

What determines an unrestricted free agent?

A player with four or more accrued seasons whose contract has expired. He is free to sign with any club, with no draft-choice compensation owed to his old club, through July 22 (or the first scheduled day of the first NFL training camp, whichever is later). At that point, his negotiating rights revert exclusively to his old club if by May 2 the old club tendered the player a one-year contract for 110 percent of his prior year’s salary. His old club then has until the Tuesday following Week 10 of the regular season (November 15) to sign him. If he does not sign by that date, he must sit out the season. If no tender is offered by May 2, the player can be signed by any club at any time throughout the season.

What determines a franchise player?

The salary offer by a player’s club determines what type of franchise player he is: exclusive or non-exclusive.

An “exclusive” franchise player – not free to sign with another club – is offered the greater of (i) the average of the top five salaries at the player’s position for the current year as of the end of the restricted free agent signing period on April 22; or (ii) the amount of the required tender for a non-exclusive franchise player, as explained below.

Article 10, Section 2(a)(i) of the CBA sets forth the methodology, known as the “Cap Percentage Average,” for calculating the required tender for a non-exclusive franchise player:

The Nonexclusive Franchise Tender shall be a one year NFL Player Contract for (A) the average of the five largest Prior Year Salaries for players at the position . . . at which the Franchise Player participated in the most plays during the prior League Year, which average shall be calculated by: (1) summing the amounts of the Franchise Tags for players at that position for the five preceding League Years; (2) dividing the resulting amount by the sum of the Salary Caps for the five preceding League Years . . . ; and (3) multiplying the resulting percentage by the Salary Cap for the upcoming League Year . . . (the “Cap Percentage Average”) . . . ; or (B) 120% of his Prior Year Salary, whichever is greater . . . .

If a club extends a required tender to a “non-exclusive” franchise player pursuant to this section, the player shall be permitted to negotiate a player contract with any club, except that draft-choice compensation of two first-round draft selections shall be made in the event he signs with a new club.

How many franchise players and transition players can a team designate each season?

A club can designate one franchise player or one transition player among its potential restricted or unrestricted free agents.

Can a club decide to withdraw its franchise or transition designation on a player?

When must teams be in compliance with the salary cap?

If a team is under the salary cap at the end of a given season, can the team “carry over” room to the next season?

Yes. A team may carry over room from one league year to the following league year by submitting notice to the NFL prior to 4:00 p.m. ET on the day following the team’s final regular-season game, indicating the amount of room that the club wishes to carry over.

What is the maximum amount of room that a club can carry over?

Sportsnaut will provide continual and live coverage of NFL free agency throughout the duration. Click here for our list of the top 200 players on the market. We also have a full breakdown of what the NFL offseason schedule looks like, including the upcoming draft.