The 2023 NFL Draft rumors are flying long before Roger Goodell announces who will be the No. 1 pick. While the pre-draft process will lead to plenty of speculation and debate, the latest NFL Draft rumors provide an early look at what could happen.

Each NFL offseason provides fans with an opportunity to get excited about the future. It’s especially true for a 2023 NFL Draft class that features plenty of high-end talent at star positions and marquee names who have dominated college football for years.

Naturally, NFL Draft rumors are a mixed bag of useful information and smokescreens. Teams will happily leak out misleading information with the hope it influences when specific players are selected. In the weeks ahead, we’ll analyze every rumor and determine whether fans should take it seriously or view it as the latest smokescreen from the NFL.

As the Senior Bowl 2023 wraps up, information on some notable 2023 NFL Draft prospects emerged with some players boosting their stock while others created more questions.

It starts with Georgia Bulldogs quarterback Stetson Bennett, who was recently charged with public intoxication. The 25-year-old quarterback hasn’t done himself any favors during the pre-draft process. Already knocked for his size and diminished talent, Bennett opted not to participate in the Senior Bowl. Between his recent off-field issue and the declined Senior Bowl invite, NFL executives told Ari Meirov of the 33rd Team that Bennett now projects as a late Day 3 pick at best.

It’s not all bad news for NFL Draft prospects. Tulane running back Tyjae Spears stood out at the 2023 Senior Bowl, catching the eyes of NFL teams with his big-play ability, vision and athleticism. In addition, per Meirov, scouts and executives came away impressed by Notre Dame edge defender Isaiah Foskey and Tennessee offensive tackle Darnell Wright.

Many have assumed for the past year that Alabama Crimson Tide quarterback Bryce Young would be the first pick in the 2023 NFL Draft. While he is still the consensus QB1 this year, the latest NFL Draft rumors indicate there is plenty of debate regarding the position.

According to Tony Pauline of Pro Football Network, several NFL executives believe that Ohio State signal-caller C.J. Stroud will be the No. 1 overall pick. Furthermore, there are additional evaluators who think Stroud is going to be the best quarterback from this crop three years from now.

Naturally, there is a wide spectrum of opinions. While a majority of scouts still love Young’s football IQ and processing ability, making him the most NFL-ready quarterback, others are thinking of the upside. It’s why a select number of evaluators are betting on either Will Levis or even Florida Gators quarterback Anthony Richardson to emerge as the best player from the 2023 NFL Draft. 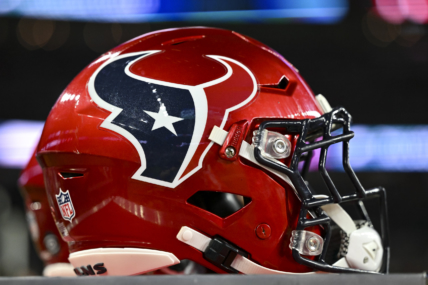 Also Read:
Draft expert claims Houston Texans will ‘do everything they can’ to trade up to No. 1

Anonymous executives play a part in NFL Draft rumors every year, either providing information about top prospects moving on draft boards or concerns teams have regarding a player. Of course, there are also anonymous reports from scouts about character concerns regarding players.

According to Sports Illustrated’s Albert Breer, NFL executives are already taking a hard look at Georgia Bulldogs stars Jalen Carter and Kelee Ringo. Specifically, they are focused on exactly how difficult they were for Georgia’s staff to coach.

“It’s not fatal character stuff. I’ve had people tell me Ringo’s not a bad kid, he just frustrates the hell out of you. And Carter, I don’t know if he’s malicious, it’s nothing criminal, but he’s not easy to coach.”

It’s worth keeping in mind that Bulldogs’ coach Kirby Smart praised Carter’s discipline and restraint during an on-field incident in December. Furthermore, Georgia football reporter Anthony Dasher shared that his conversations with the coaching staff have provided any credibility to the rumor that Carter might have character issues.

NFL coaches are more than willing to put up with strong personalities and overconfident young players if it helps them win games. With no off-field issues to speak of, these red flags won’t prevent Carter and Ringo from being top picks.

After the Chicago Bears landed the No. 1 pick in the 2023 NFL Draft, speculation erupted regarding their plans with the coveted selection. Alabama Crimson Tide quarterback Bryce Young is viewed as an elite talent and is favored to be the first pick in the NFL Draft. However, Chicago still has Justin Fields and the organization loved what it saw from him in 2022.

While there will be plenty of NFL Draft rumors regarding the Bears’ plans with the pick, ranging from teams interested in a trade-up to Chicago’s owner valuation of the 2023 quarterback class, general manager Ryan Poles seemed to cast some doubt on the possibility of drafting a quarterback with the top pick then trading Fields.

“We’re going to evaluate the draft class. I would say this, I would have to be absolutely blown away to make that type of decision.”

Young is the consensus No. 1 quarterback in 2023, but he doesn’t come with a flawless scouting report. Alabama listed him at 6-foot and college football teams are typically very favorable to their players with their listed size. Young doesn’t have the elite arm strength to make up for the concerns regarding his size and he isn’t on the same tier athletically as Kyler Murray, whose movement and elusiveness in space lessened some of the concerns regarding his size.

Teams like the Indianapolis Colts, Houston Texans and Carolina Panthers will certainly be willing to pay a premium price to land Young. Ultimately, the likeliest outcome is either Chicago trades down or selects a defensive player first overall.

There are few players in the 2023 NFL Draft with more tantalizing potential than Anthony Richardson. If picks were made entirely based on raw tools, Richardson would be a top-five selection. However, the Florida Gators quarterback is a major work in progress as a passer.

Multiple NFL evaluators told Tony Pauline of Pro Football Network that Richardson is at least a two-year project, which makes it unlikely his name is called in Round 1. Some believe he is even less polished than Malik Willis coming into the draft, but Richardson’s ceiling is far higher than the Titans’ quarterback of the future.

Ultimately, Richardson projects as a Round 2 pick to a team with a settled quarterback plan for at least the 2023 season. He’ll need a year-plus working on his mechanics, decision-making and refining his accuracy before being anywhere close to starting.

Darnell Washington isn’t the best tight end on the Georgia Bulldogs roster nor is he the No. 1 player at his position in the 2023 NFL Draft. Yet, the 6-foot-7 offensive chess piece is already becoming a favorite prospect for plenty of NFL teams.

According to Tony Pauline of Pro Football Network, a lot of scouts view Washington as a “terrific” tight end who will be drafted much earlier than many project. While some mock drafts view him as a Day 2 selection, there’s a chance he could get picked late in Round 1.

There have been NFL comparisons to Marcedes Lewis, who functions like another offensive tackle on the Green Bay Packers offensive line. However, Washington’s athleticism is reminiscent of Lewis in his prime years and there is even more upside for Washington as a red-zone threat. He definitely projects to be an even better NFL player than he was in college.

There is plenty of debate regarding where C.J. Stroud will be drafted. Plenty of executives share the belief that Stroud is a better quarterback prospect than former Ohio State star Justin Fields. However, he went into the CFP Semifinal with most consensus draft boards ranking Stroud behind Bryce Young and Will Levis.

Facing the one of the best defenses in college football, Stroud put everyone on notice. The Heisman Trophy finalist posted a 93.9 QBR with four touchdown passes, 348 passing yards and a 67.6% completion rate. The 6-foot-3 quarterback led Ohio State to 41 points, doing a lot of damage without top wideouts Marvin Harrison Jr. and Jaxon Smith-Njigba.

‘He really helped himself and that he was doing it without star players was huge. It’s all the stuff he was busted on—that he was good, but it was more about the star receivers or the line. He was without his top two receivers, top two backs, best tight end, that all counts for something. And I don’t know if it was a conscious effort he made, but that he willingly pulled the ball down and ran is something everyone will notice.”

Stroud’s ability to handle pressure with ease and make smart decisions with defenders in his face spoke volumes to talent evaluators. He also showcased effective athleticism, moving around in the pocket and even running for first downs when necessary.

Widely viewed as a player ready to start in Week 1, Stroud likely guaranteed a top-10 selection. If he performs at the NFL Combine and puts on a show then crushes the interview process, there’s at least a chance he could be the first quarterback drafted.

Even after winning his first national championship, few viewed Stetson Bennett as a future NFL quarterback. Far more often, the Georgia Bulldogs’ captain was talked about as a future owner of car dealerships in Georgia. Months later, Bennett is a safe bet to at least be selected on Day 3 of the 2023 NFL Draft.

There are plenty of factors working against Bennett that drive down his NFL Draft projection. Among them; he’ll be a 26-year-old rookie during the 2023 season and he is measured at a height of 5-foot-11. Combine that with the limited physical tools and there isn’t a real promising future as a starting quarterback at the next level. 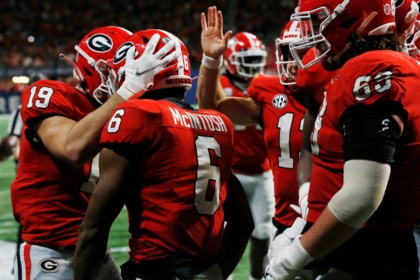 With that said, intangibles and pre-draft interviews still matter. Bennett’s past two seasons at Georgia give him one of the best winning records by a quarterback in recent memory. He is also well-regarded for his leadership, poise, accuracy and football IQ. He had plenty of fans within NFL circles midway through the 2022 season with drives like the game-winner vs Ohio State strengthening his profile. Ultimately, Bennett profiles nicely as a backup quarterback for a decade.

Multiple teams view Will Levis as No. 1 QB in 2023 NFL Draft

Kentucky Wildcats quarterback Will Levis entered the season as a projected first-round pick in the 2023 NFL Draft. He faced challenges due to the below-average supporting cast at Kentucky, including another year with a new offensive coordinator. While his numbers don’t jump off the stat sheet, there are plenty of NFL teams that love him.

Multiple NFL scouts view Levis as the top passer in the 2023 draft class. It goes beyond just a few scouts, with ESPN’s Mel Kiper echoing that several teams have Levis atop their draft board. It all comes down to physical tools as Levis’ arm strength and athleticism far exceed what Bryce Young and Stroud bring to the table.

There’s a chance Levis becomes the next Zach Wilson, but upside means everything to teams picking near the top and the raw traits Levis has draw similarities to Josh Allen. Ultimately, Levis is a safe bet to be a top-10 pick and he could realistically go No. 1 overall. 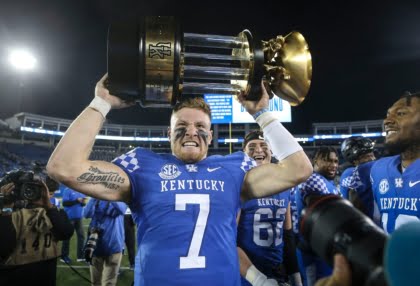