Ohio State Buckeyes quarterback C.J. Stroud will enter the 2023 NFL Draft process facing the narrative of how many previous signal-callers from his alma mater have failed in the NFL. Fortunately, there are plenty of scouts and executivives who believe he is better than his predecessors.

The 6-foot-3 quarterback enjoyed a phenomenal Buckeyes career, twice finishing as a Heisman Trophy finalist and earning second-team All-American honors this past season. While he doesn’t have the resume to match fellow 2023 prospect Bryce Young, Stroud is widely recognized as one of the best 2023 NFL Draft QB prospects

He can elevate his stock even further during the pre-draft process. Praised for his football IQ, processing and decision-making, Stroud is exactly the type of quarterback who can make a strong impression on coaches and general managers at the NFL Scouting Combine.

While the knock on Ohio State quarterbacks will follow him, at least one NFL executive clearly believes Stroud is the best Buckeys’ passer to enter the NFL in years. However, the veteran scout still doesn’t believe he belongs in the conversation as the best signal-caller this year.

Speaking to Sports Illustrated’s Albert Breer about the 2023 quarterback class, an NFC executive shared his thoughts on Stroud in comparison to Justin Fields, Young and Will Levis.

“I like him better than I did Fields. But he’s still third in the group [behind Alabama’s Bryce Young and Kentucky’s Will Levis] for me.”

C.J. Stroud vs Will Levis

It’s no surprise that Young is likely viewed around the league as the better prospect. However, Levis might be a surprising name to NFL fans. The Kentucky Wildcats quarterback entered the 2022 season without nearly as much national attention and he didn’t do himself any favors with a 19-10 TD-INT ratio and an ESPN QBR that ranked 60th in the country this season.

Of course, there’s a reason ESPN’s Mel Kiper Jr. has Levis as the No. 1 quarterback on his draft board. It ties into what many scouts and executives in the NFL see, a 6-foot-3 quarterback with elite arm strength and athleticism that allows him to rush for 400-plus yards in a season or simply make plays out of the pocket.

Stroud lacks those same prototypical tools that coaches can dream about building their offense around. He is more of a finished product, but he also didn’t help his draft stock with the statistical decline he experience late in the season.

If an NFL general manager is going to spend a top-five pick on a quarterback, someone who is meant to be the face of the franchise, upside is the goal. Levis offers the highest potential, representing a mold slightly similar to Josh Allen that a team can convince itself will become the next NFL star because of their coaching.

Stroud doesn’t offer that same upside as he’ll likely never even be in consideration for an All-Pro team at his peak. It explains why Levis is generating far more hype during the pre-draft process, despite the stark differential in their accomplishments in college. 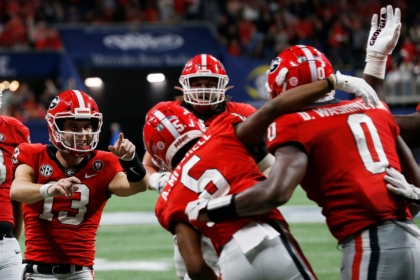 Of course, the bets on the high-upside quarterback don’t often pay off. Zach Wilson is just the latest example of how badly things can go wrong if a team bets too much on tools and misses on the intangibles. It could be what gives Stroud a safer pick with a longer NFL career than Levis.