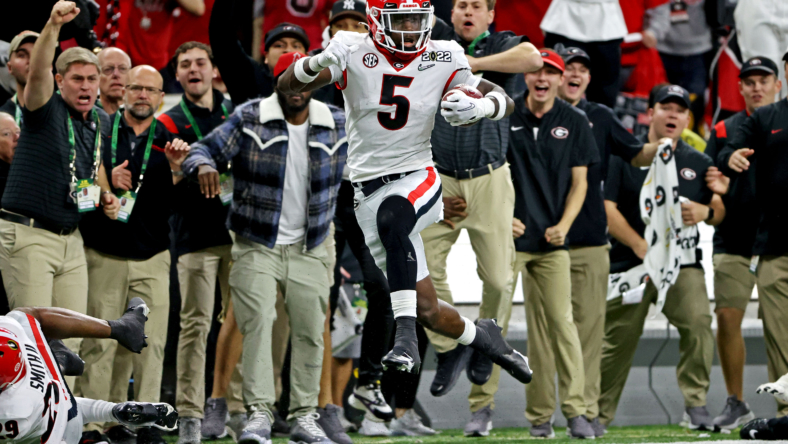 It’s crazy to think we’re already roughly a third through the college football season. As usual, we’ve seen some overlooked players develop into top NFL Draft prospects before our eyes, such as Tennessee’s Hendon Hooker. Of course, we’ve also seen a few fall off the map, we don’t need to name them. They know who they are.

While we’re six months away from the 2023 NFL Draft, right now is the golden opportunity for scouts and analysts to pay close attention to the league’s next pros or potential pros. This week we’re highlighting the ten best NFL Draft prospects to watch in Week 6 of the college football action set to take place this weekend.

These may not exactly be the best of the best, as we’ve tried to mix it up a bit, introducing a new prospect each week, but these ten current college football players are all likely to hear their names called on draft day, likely in 2023.

At first glance, many may not think Wake Forest QB Sam Hartman is a top pro prospect. He’s 6-foot-1, has been in college for five seasons, and doesn’t have a rocket arm. The 23-year-old has an NFL arm capable of making all the throws at the next level, but he’s not going to wow anyone with his strength or zip.

What he lacks in arm talent, Hartman makes up for by having sharp pocket awareness, and he’s not afraid to take off when a play breaks down. Perhaps too much, as he’s not one of the better athletes, even at the college level. While some of these traits may not sound like the profile of generational talent, Hartman could become a Day 1 or Day 2 pick thanks to having shown ideal timing and touch in the short and middle areas of the field.

In all, Hartman had a very productive season in 2021 and only looks to have improved in 2022. He should thrive against an Army team that really only has one threat — pass rusher Andre Carter II, who tallied 14.5 sacks a year ago. Basically, Hartman will want to avoid No. 34 rushing off the edge. 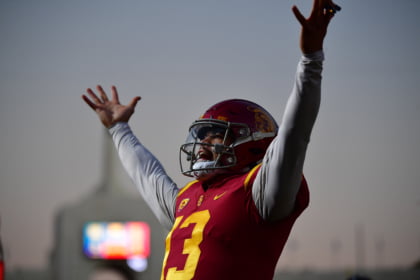 After battling inconsistency issues the past two seasons, where many questioned whether he was an athlete or a quarterback, Jordan Travis has erased all doubt. He’s finally making good on his raw talent, becoming a refined passer who has the 10th-best adjusted yards per passing attempt in the nation. The 6-foot-1 dual-threat QB has taken great strides since he completed just 55% of his passes in 131 attempts in 2020. Completing 65.9% of his passes as a junior, Travis’s NFL draft stock is on the rise.

For anyone who doesn’t believe Travis can hack it as a passer, they’ll want to tune in this Saturday when he battles the 27th-ranked pass defense in college football. Moreso, if you want a quarterback who can improvise and keep the play alive while still looking downfield, Travis may be the solution. While consistency issues will still be a problem, there’s enough to like about the Florida State QB’s game for an NFL team to give him a look.

Thrust into a bigger role after Hassan Haskins graduated to the NFL, Blake Corum’s NFL draft stock has soared in his junior season. If you didn’t have your eye on Corum prior to his massive 243-yard, two-touchdown performance against Maryland, he’s become impossible to ignore after yet another strong effort in Week 5. Corum followed up his legendary performance with another 133 yards against a stout Iowa run defense.

The 5-foot-8, 200-pound running back has the fourth-most rushing yards in college football and takes on an Indiana defense that ranks in the middle of the pack at stopping the run. In what should be a blowout, expect to see a lot of action from No. 2 on Saturday. While Corum does have some muscle to him, especially in the lower half, he’s a speed back all the way, thanks to having excellent feet and the ability to make sudden cuts on a dime. He’s a joy to watch in the open field and we should get a chance to see him dance against the Hoosiers. 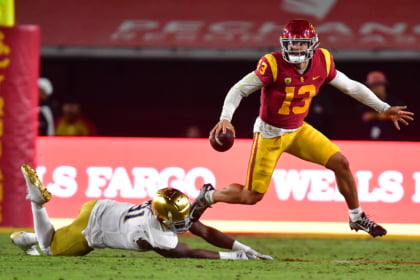 There’s a good chance LSU receiver Kayshon Boutte becomes the next Tiger wideout to become a first-round pick, but it’s not because of having freakish size. Boutte’s just 6 feet tall, but he plays much bigger. The junior pass-catcher also has elite speed and is a threat to score any time he touches the ball by way of making defenders miss in the same ways he gets open.

Boutte’s hands are not always top-notch, as he has a tendency to use his body to catch footballs instead of primarily relying on his mitts. But once that ball is in the air, Boutte makes sure to put himself in prime position to come down with the pigskin. Although LSU’s QB Jayden Daniels isn’t the most prolific passer out there, Tennessee’s pass defense allows the third-most yards per game, meaning Boutte should have several opportunities to stretch his legs.

When it comes to NFL size, Cameron Latu checks all the boxes. The tight end is listed at 6-foot-5, 244 pounds. While he’s had some mental lapses, Latu’s hands are his best attribute. The senior still needs to improve as a blocker. It’s not that he doesn’t play with grit. That’s not a question, he just needs to tap into that dark side a bit more often when on the line. As long as he contributes as a receiver, Latu will see the field, just don’t expect him to outrun many defenders or do much after the catch.

Even with Bryce Young under center, the QB’s coming off a shoulder sprain, which means the Heisman winner may not be 100% on Saturday. Making matters worse, Texas A&M is one of the better pass defenses in the country, allowing 188 passing yards per game (30th). This is where Latu will have to show up in the run game, opening holes for his teammates in front of NFL scouts and take advantage of whatever pass-catching opportunities may come his way.

While he’s just a junior, there’s no question Paris Johnson Jr. has NFL left tackle written all over him. The Buckeyes lineman is already being penciled into the first round of the draft after showing the versatility to play both tackle and guard. Yet, standing 6-6 and topping 300 pounds, his future is on the bookend.

The Spartans have linebacker Jacoby Windmon, who’s tallied 5.5 sacks in just four games. Keep an eye on the matchups between No. 4 in green and 77 in red. Johnson has allowed just one sack in his college career, and that’s unlikely to change this week.

Sure, Calijah Kancey may not be the most intimidating player at first glance, but he’s actually about the same size as former Pitt defensive tackle Aaron Donald. While we’ll stop the comparisons there, Kancey is also a pass-rusher who lives in the opponent’s backfield. Kancey has compiled 27.5 tackles for loss across three seasons and should be able to add to his totals against the Hokies.

Kancey may not be the biggest, but he sure is athletic, so much so that he made Bruce Feldman’s annual ‘Freak List’ after coach Pat Narduzzi claimed the DT can run a 4.69 40-yard dash in addition to other impressive pre-draft measurables. Of course he won’t live up to the Aaron Donald comparisons, but Kancey looks every bit like a future NFL d-lineman.

Alabama’s Will Anderson Jr. is the unquestioned top pass-rush prospect in the 2023 NFL Draft class, but Foskey isn’t that far behind. Unlike many other freakish edge rushers, Foskey actually has the production to back it up, having racked up 17.5 sacks through 29 games. The All-American speed rusher comes in at 6-foot-5, 260 pounds, and could probably already make an impact on Sundays thanks to having a polished skillset.

We’re in for a treat on Saturday night with Foskey taking on a ranked BYU team that loves to dial up the pass. Jaren Hall is one of the more prolific passers in the nation, but he hasn’t faced many edge rushers like Foskey. Grab your popcorn for this one.

The Clemson Tigers always seem to have NFL talent riddled throughout Dabo Swinney’s defense. Linebacker Trenton Simpson is simply the latest future pro. After tallying 12.5 TFLs to go with 6.5 sacks as a sophomore, Simpson has yet to add to either totals in 2022. We expect that to change against Boston College, who can’t physically match up well with the Tigers.

Simpson can do it all from a linebacker’s perspective. Ask him to rush the passer, drop back in coverage, or come up and make stops against the run. He’s excellent in all aspects. Expect to see Simpson landing in the first round of next April’s player selection process.

There isn’t another cornerback prospect that’s more exciting than Georgia’s Kelee Ringo. He’s played a key role on one of the nation’s top units in football each of the past two years and only continues to sharpen his skills. Coming in at 6-foot-2, while also being able to absolutely fly down the sideline, sticking with any receiver in the game, Ringo’s a freak talent. Expect to see Ringo’s name called in the first 15 picks of the 2023 NFL Draft.

Ringo is at his best in man coverage since he can practically run the routes for the receivers, yet he’s also strong as a zone defender as well. With ball skills, crazy length, and athleticism, there’s nothing not to like about Ringo. With Auburn’s offense struggling to move the ball, Ringo can probably afford to play off his man a bit on Saturday, maybe it leads to a few big plays elsewhere.

NFL Draft prospects who improved their stock in Week 5

NFL Draft prospects whose stock took a hit in Week 5