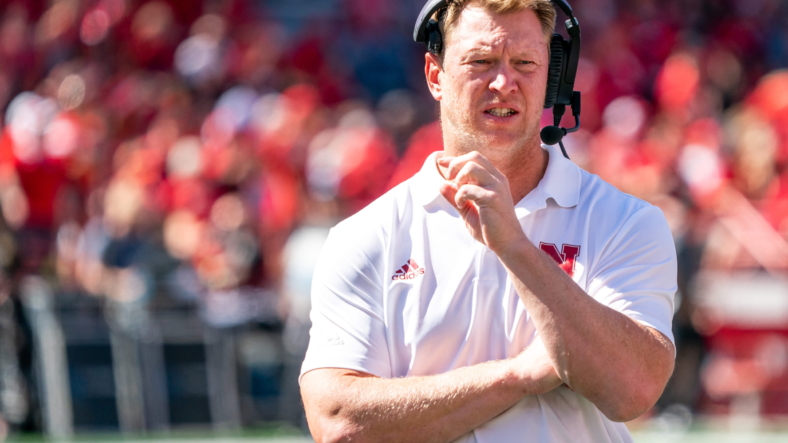 The Nebraska Cornhuskers hired Scott Frost with the hope he could turn his alma mater around. After more than four seasons, Frost’s tenure with the program could only be described as a disaster. It also came to an end following an ugly home loss to Georgia Southern on Saturday with Nebraska announcing that Frost had been fired.

Frost took over a program that went 19-19 during the Mike Riley era, a standard that wasn’t acceptable to the athletic department nor the fans. Following an 8-4 season in 2017, Riley was pushed out and the Cornhuskers brought Frost home.

Everyone knew they had to be patient, giving Frost time to rebuild the program. It made a 4-8 season in 2018 excusable, but things were supposed to change in 2019. Instead, Nebraska went 5-7 as its streak of seasons without a bowl appearance continued.

Related: Scott Frost could already be done at Nebraska

Unfortunately, those appear to be the glory years with Frost at the helm. After winning nine total games in the first two seasons, Frost’s Cornhuskers entered Week 2 with a 6-15 record since 2020. Players and facilities aren’t the ones to blame. Nebraska is 5-22 in one-score games, per ESPN, the worst record in the entire FBS during that span.

The win over North Dakota proved nothing. Nebraska beat up on an opponent that is in an even lower class than the one Frost has built. In Week 3, though, the true problems with Frost’s programs were on full display once again in the loss to Georgia Southern.

Now that Nebraska has moved on from Frost, here are four coaching candidates who could help turn this program around.

There are going to be Urban Meyer rumors again. He failed in the NFL, but a return to college football is always football. In terms of his reputation, it’s certainly much worse than when he left Ohio State. There are obvious drawbacks with the legendary college coach, things that should give the Huskers’ athletic department pause.

He included morality clauses in his coaches’ manual about avoiding strip clubs or “venues that would embarrass Ohio State University. Yet, he knew about the issues with Zach Smith during his stint at Ohio State. Meyer saw 31 player arrests during his tenure with the Florida Gators and allegedly helped cover up a racially-charged altercation between Smith and a player with the Buckeyes. Yet, it feels like Nebraska is desperate.

Related: Scott Frost boasts about ’15-20′ vomits by players per practice

The Cornhuskers haven’t enjoyed a winning season since 2016 and they have won just two bowl games since 2010. Many programs should have significant reservations about Meyer, it might even be best to avoid him. But someone is going to give a coach with a 187-32 record a shot and it’s a safe bet he would turn this back into a winner.

Tennessee Volunteers offensive coordinator Alex Golesh is one of the rising coaching candidates in college football. Born in Moscow, Russia, the 38-year-old assistant joined the Vols in 2021 and played an instrumental role in the team’s offensive turnaround.

Quarterback Hendon Hooker became one of the nation’s breakout players in 2021 with Golesh as his offensive coordinator and play-caller. He is also part of a strong coaching pipeline, with experience under Jim Tressell, Matt Campbell and now Josh Heupel.

Obviously, many will want the Cornhuskers to go after a proven name with experience as a head coach. If the top options turn this team down, which is a reasonable belief, Golesh is an underrated name that should be on the watch list of Nebraska coaching candidates.

Bill O’Brien seemed like he would become a popular coaching candidate after the 2021 season. He spent time with Nick Saban, which carries a lot of weight for universities evaluating their options. Yet he remains at Alabama, coaching reigning Heisman Trophy winner Bryce Young with an opportunity for both men to build upon their elevated stock in 2022.

There is a negative perception of O’Brien by fans, but that isn’t shared by those in football. Being a trusted voice in the ear of both Saban and Bill Belichick speaks volumes. O’Brien has also received praise from players for his work ethic, he develops strong relationships with his quarterback and Young credits O’Brien for a lot of his success.

We’ve seen him be successful under extremely difficult circumstances at Penn State, posting a 15-9 record before jumping to the NFL. He’s proven himself as a trusted leader in a locker room and his work with quarterbacks speaks for itself. If the Cornhuskers want an experienced coach with a better track record than Frost and a better reputation among his peers, O’Brien is a quality option.

The Carolina Panthers provided Matt Rhule with one last chance to prove he belongs in the NFL. He’s out of excuses this season with the quarterback situation improved and outstanding skill players on both sides of the ball. Yet, a departure feels imminent for a team projected to miss the playoffs with an impatient owner at the helm.

If he is fired, Rhule immediately becomes the best coaching candidate available. He took over at Temple and needed time to implement his culture and build a quality roster. After winning eight games in his first two seasons, the Owls went 20-7 in the next two years before Rhule took on the challenge of rebuilding Baylor.

The Bears were at an even lower point than Nebraska is now. It showed in Rhule’s first season, Baylor went 2-11. In his second year, the team won seven games and secured a victory in the Texas Bowl. Everything came together in 2019 as Baylor went 11-3, making it to the Sugar Bowl.

Rhule is exactly the type of coach who can build a college football program the right way and he knows how to surround himself with quality assistants and coordinators on both sides of the ball. Nebraska would become more disciplined and you can bet it would post a far better record in one-score games. Boosters might need to put a lot of money on the table, but Rhule would be perfect for Nebraska.