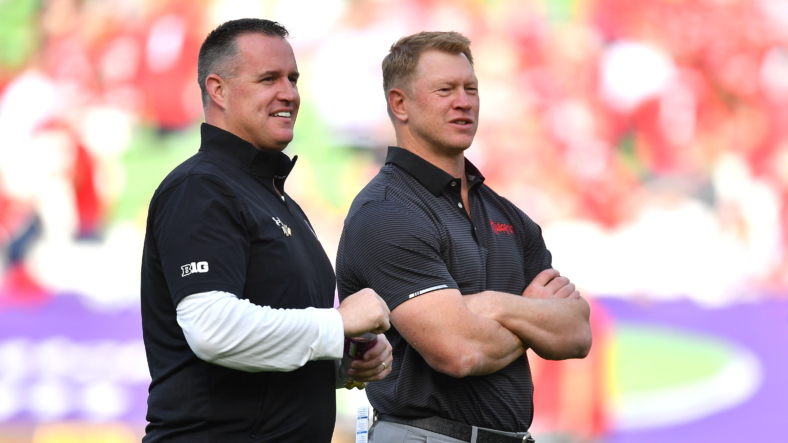 Scott Frost and the Nebraska Cornhuskers found themselves as 13.5-point favorites in their season opener against the Northwestern Wildcats on Saturday. Heading to Ireland for the opener, Nebraska had some level of confidence despite winning 15 of Frost’s first 44 games as head coach in Lincoln.

For a once proud college football program, starting out the 2022 season on a high note was a priority. That’s especially true with Nebraska traveling across the pond to take on a Wildcats squad that won all of three games a season ago and seems to be in transition mode under head coach Pat Fitzgerald.

Things started out pretty good with Casey Thompson hitting Isaiah Garcia-Castaneda on a 32-yard touchdown to open the game. After Northwestern hit a field goal late in the first quarter, Thompson ran it in from one yard out to give Nebraska a 14-3 lead. Things went down hill from there with Northwestern scoring consecutive touchdowns to close out the first half with the lead.

Anthony Grant’s two touchdown runs in th third quarter would give Scott Frost and Co. some hope before Northwestern scored the final two touchdowns of the game to win 31-28. Once Thompson threw an interception with 1:27 remaining in the final stanza, that was pretty much all she wrote. Nebraska now heads back to the states with a 0-1 record on the season and looking very much like the lackluster program we have seen under Frost during his tenure.

Casey Thompson played well outside of that one interception. Star running back Anthony Grant did his thing. Both came to play. So, why the loss? A lot of it is on Frost himself, including one vomit-inducing decision (yeah, we went there).

Up 28-17 in the third quarter after Grant’s second post-halftime touchdown, things were seemingly trending in the right direction for Frost and the Cornhuskers. That’s when he shockingly attempted to pull off an onside kick. It failed miserably.

Within about a minute, Northwestern would score a touchdown on a three-yard run by Cam Poter to pull the Wildcats within four. The decision by Frost to go for an onside kick up 11 left college football fans and media with their jaws on the ground.

Despit this, Frost opted to pass the blame to his coaching staff. That included first-year offensive coordinator Mark Whipple.

“I think our offensive staff has to learn you’ve got to be a little more creative in this league,” Scott Frost said after the game.

This has been the story of Frost’s career since he took over for Mike Riley as the program’s head coach after the 2017 season. In his first four seasons with the Cornhuskers, Frost didn’t win more than three games once. He’s failed to lead this program back to the national relevance that we saw under the great Tom Osborne, and to a lesser degree, Frank Solich.

It has Frost on the hot seat as Nebraska prepares for two easy games against North Dakota and Georgia Southern ahead of a Sept. 17 matchup against the ninth-ranked Oklahoma Sooners. The question now becomes whether Frost will even be on the sidelines for that huge game against Oklahoma.

We’re pretty darn sure Alberts, a former star under Osborne with Nebraska, will be singing a different tune following this ugly season-opening loss. Whether that leads to Scott Frost’s departure remains to be seen.