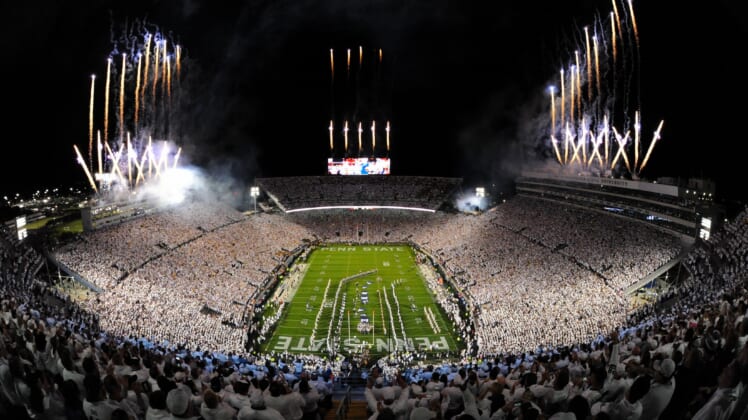 When it comes to ranking the best college football stadiums, a variety of factors are in play, and it depends on the individual’s preference as far as which venues are among the NCAA’s true elite.

For us, the atmosphere, stadium capacity, surrounding backdrop and scenery all play huge roles, as does how prominent the team that plays there is in the modern game.

With those qualifiers plainly stated, here’s our ranking of the 20 best college football stadiums heading into 2022. 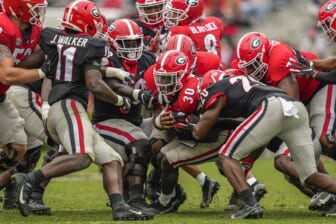 To kick things off, we have a shocker: the BYU Cougars’ LaVell Edwards Stadium gets the nod for the 20th spot. This site edged out Army’s legendary Michie Stadium and Georgia’s Sanford Stadium and all its “between the hedges” glory. Much of that has to do with the Provo, Utah, venue directly bordering Y Mountain to provide a stunning view, as you can see above.

It’s been a struggle in recent years for the Nebraska Cornhuskers, but the indefatigable spirit of their fans in Lincoln still makes Memorial Stadium a phenomenal atmosphere for college football. The program is the state’s athletic pride and joy, and regardless of how Nebraska’s season is going, fans routinely turn out to fill the 86,047-seat venue. In fact, Memorial Stadium has housed a record 375 consecutive sellouts. Granted, it’s taken donors buying countless tickets to keep the streak alive and it might end very soon. If we’re being honest, this might be the last year Memorial Stadium ranks among the best college football stadiums.

The legendary “Jump Around” tradition that Wisconsin Badgers fans engage in literally makes it feel like this 80,000-plus capacity site is quaking when opponents come to Madison. Camp Randall Stadium has expanded and been added on to over the last several years, which makes it an all the more intimidating environment for Big Ten rivals to travel to.

Now, some may regard this as one of the absolute worst venues in all of sports, but this author loves the Boise State Broncos’ one-of-a-kind turf. Albertsons Stadium sports an all-blue field, which definitely throws viewers for a loop and looks even crazier in person. It’s not for everyone, but those who embrace the Boise blue can’t get enough of it. The smaller 36,387-seat setting creates an intimidating environment to enjoy a premier mid-major powerhouse.

Now, Colorado has not fared well on the gridiron for the past decade and a half or so, but you can’t deny that Folsom Field is absolutely among the best college football stadiums. When you look at some of the images of the Buffaloes’ home, you can’t help but be taken with the scenic sunsets over mountainous terrain and the unique atmosphere of game days make Folsom Field a seminal stadium experience.

Hardly any fan base in the country is as passionate as that of the Auburn Tigers. Their rivalry with Alabama in the annual Iron Bowl and SEC status make the Tigers a must-watch every year, and no matter how Auburn is faring in a given season, Jordan-Hare Stadium is always a road trip adversaries dread. You can never count the Tigers out when their 87,451-seat house is rocking. It’s just a shame coach Bryan Harsin isn’t making the most out of a great program with a phenomenal fan base. 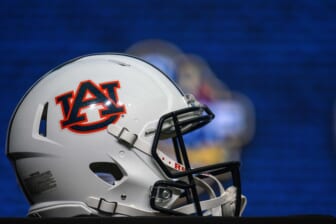 Maybe the 100,000-plus capacity Kyle Field deserves to be a little higher on this list, but without as much history as some of the other stadiums, it’s more highly regarded for its incredible, $485 million rebuild that began in November 2013. You might quite literally say it’s the house that Johnny Manziel built after his historic run with the Aggies in College Station, where he became the first freshman to win the Heisman Trophy.

But times might be changing. Beating Alabama at Kyle Field meant so much to this program and the fans reflected the impact of the moment on that special night. With the No. 1 recruiting class in the country now arriving, perhaps Texas A&M could be a real force in the SEC.

Lots of iconic sporting events have taken place in Los Angeles Memorial Coliseum, which now seats 77,500. But even disregarding those, the USC Trojans have one of the biggest brands in college football. Their historic stable of running backs, and the dynastic Pete Carroll era are just a couple of highlights in USC’s storied history, and fans have gotten to witness the Trojans achieve glory under the bright Coliseum lights for many years.

We’re expecting even more in 2022. Lincoln Riley will bring the juice USC’s offense needed and the best talent in Southern California is finally staying home. It wouldn’t surprise us if the improved atmosphere pushes the Memorial Coliseum up our list of the best college football stadiums by November. 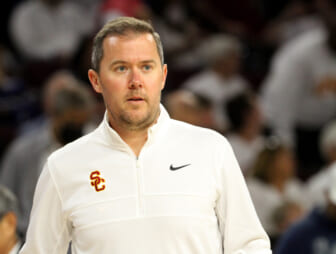 Speaking of amazing runs in recent years, head coach Dabo Swinney has led the Clemson Tigers to a phenomenal, historic rate of winning, and Memorial Stadium, also known as “Death Valley” makes it even harder for ACC foes to defeat the conference’s juggernaut. Clemson’s famous Running Down the Hill and Howard’s Rock are touchstones that give Memorial Stadium an electrifying pregame flair.

Unfortunately, in an ugly 2021 season, we had to bump Death Valley down, Once this program gets back on track, we might see this beauty move into the top-10 best college football stadiums. For now, it’s just behind some other historic venues.

No one has a more successful program than the Alabama Crimson Tide since Nick Saban took over in Tuscaloosa, and Bryant-Denny Stadium has proven to be as difficult a place for opponents to win as any in the country as a result. Named in part for the legendary coach Paul “Bear” Bryant, the Tide have expanded capacity into six figures, and is going to remain a fixture as one of the nation’s premier venues.

Austin is an especially colloquial capital city of Texas, but the cliche that everything is bigger in the Lone Star State applies to the Longhorns’ football home of Darrell K Royal Texas Memorial Stadium. Seating just over 100,000, this setting makes for plenty of excitement and a goosebumps-inducing way to watch some of the best theatre Big 12 football has to offer. It’s just a shame the Longhorns are a perennial disappointment. Good luck in the SEC, we’ll see if Quinn Ewers can provide more energy to the crown at Texas Memorial Stadium.

South Bend, Indiana, is home to one of the most recognizable football programs of all-time. The Notre Dame Fighting Irish don’t even need to get creative with their stadium name. They’re just a big deal, and so is their hosting venue. Thanks to a national TV contract and a phenomenal, rich tradition, Notre Dame Stadium is always packed and full of excitement whenever the Irish take the field in front of their friendly fans. Quite frankly, we think things will be even better under head coach Marcus Freeman.

An aesthetically pleasing color palette and an impassioned Rocky Top faithful give the Tennessee Volunteers’ home Neyland Stadium an infusion of life on college football Saturdays. Finding the right coach to lead the program has proven challenging of late, but it shouldn’t be long until Tennessee is back among the SEC’s elite. Until then, this venue of over 102,000 in Knoxville will still prove to be a hostile environment. If the Vols are ever back, this place will be much higher on our rankings of best college football stadiums. Maybe, just maybe, they can move up in 2022. 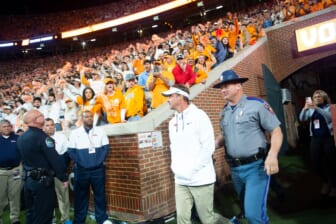 The Oregon Ducks and their rabid fans have made Autzen Stadium in Eugene, Oregon, one of college football’s primary attractions. Thanks to an ingenious lowered seating design, opponents have to deal with Oregon’s enthusiastic crowds in a far more intimate and up-close way than almost any other place in the country. That also makes for piercingly loud distractions, which gives the Ducks a massive home-field advantage with one of the best college football stadiums in 2022.

It’s impossible to separate the rich tradition of the Rose Bowl Game itself from the venue, because it’s served as the site for multiple Super Bowls in addition to being the home of the UCLA Bruins since the 1980s. The Pasadena, California, stadium has a certain mystique to it that’s difficult to articulate, and if the Bruins were a bigger factor in the Pac-12, maybe they’d help vault their historic home higher on this list.

“The Swamp” as it’s affectionately called is not a place any team wants to travel to, because the Florida Gators are tough to beat in Gainesville. Florida has always had a stellar program, but newly minted Jacksonville Jaguars Urban Meyer and Tim Tebow really helped lift the Gators to another level when they were there. Dan Mullen is now overseeing an exciting new era of Florida football.

Tiger Stadium in Baton Rouge is always going to be a brutal road trip for anyone in the SEC — and especially an out-of-conference opponent who isn’t ready for that type of intensity. It slips a bit down our list of best college football stadiums because the program needs to prove itself once again under Brian Kelly. When Alabama comes to town, though, there’s no doubt this is one of the best stadiums in college football.

We’ve put some weight on the quality of a team on this list of the best college football stadiums. Some may view that criterion as misguided, but it’s an important factor. The better a team is, the more games at their historic stadiums mean and the more raucous a crowd can be. We saw that in 2021 when Michigan made its comeback to relevancy, becoming the Big Ten champions and playing in the College Football Playoff Semifinals. With Jim Harbaugh locked in for years to come, Michigan Stadium will be rocking.

A strong argument can be made that Beaver Stadium is the best venue of them all, but let’s just say Penn State football isn’t what it once was. James Franklin has certainly helped inject life into this program, give Penn State fans reasons to create a sea of blue and white.

The Horseshoe in Columbus is an absolutely unmistakable piece of architecture, and the Ohio State Buckeyes rarely disappoint the fans who pack Ohio Stadium to the brim, beyond its listed capacity of 104,944. With such relentless fans, constant buzz and a consistently great program to back it all up, we’re confident the Buckeyes’ Ohio Stadium offers the atmosphere and experience to be No. 1 among the best college football stadiums. 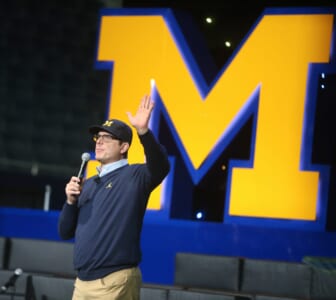