The 2022 NFL Combine in Indianapolis is now upon us. It’s an opportunity for prospects to show what they have to offer during the pre-draft process leading up to the NFL Draft itself.

It runs from March 1 through March 7. The annual event is broadcast on both ESPN and NFL Network with most of the focus being on position drills. Here’s a break down of coverage on NFL Network.

Among the most-important aspects of the NFL Combine is the positional workouts scheduled for a four-day span during the annual event. Teams also have an opportunity to meet and interview with prospects leading up to the annual NFL Draft.

As is typically the case, quarterbacks will be under a microscope as the 2022 NFL Scouting Combine gets going.

This year’s class is seen as relatively weak at the quarterback position. That’s why it’s important for these signal callers to stand out in individual workouts and during meetings with teams. Here, we check in on five quarterbacks to watch during the NFL Combine.

One of the biggest unknowns leading up to the NFL Combine, Willis is similar to what we saw from Trey Lance heading into the 2021 NFL Draft. He’s seen as uber-talented, but played against less-than-stellar competition in college. Scouts and teams are going to want to see what he brings to the table when it comes to intangibles. That includes his pocket awareness and ability to show accuracy on intermediate routes.

Willis stands at 6-foot and weighs 220 pounds. He’s a tad short by NFL quarterback standards, but makes up for it with tremendous arm strength as well as athleticism that can’t be taught. These are not areas that will be of concern to teams at the combine.

Rather, it’s all about the fundamentals and whether he’s seen as too much of a project to be selected within the top-20 picks. One team already has its eyes set on Willis in the first round. A solid performance could etch his name in stone as a first-round pick while major struggles would drop Willis to Day 2 of the draft.

As a fifth-year senior for Pittsburgh this past season, Pickett dominated the collegiate level. That included eight games with north of 300 passing yards in a pro-style offense. It has most considering the 6-foot-3 signal caller as the top quarterback in the draft class.

That’s why Pickett has so much to lose during the NFL Combine. He boasts a tremendous frame and solid arm strength. Pickett also displayed above-average accuracy while showing himself to be pretty mobile when needed. 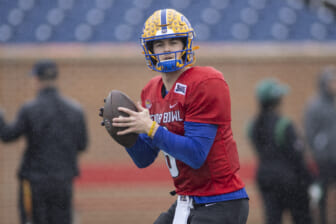 At issue here is timing-based throws, which are a necessity in today’s NFL. Scouts will want to see how he works with receivers during quarterback drills in Indianapolis. He also needs to show better pocket awareness and get rid of the ball in a quicker fashion — all of which will be on displayed during the combine. If Pickett excels, he’ll be the top quarterback off the board and could go as high as the top five depending on trades.

A Heisman candidate heading into his senior season with the Bearcats, Ridder put up a career-best performance for a team that ultimately earned a spot in the College Football Playoffs. However, there’s some concern about whether his game translates to the NFL level.

More than anything, it’s about knowing when to use his strong arm. Too often at the college level, velocity was an issue on short and intermediate routes. NFL teams like to have what’s called touch on said passes. 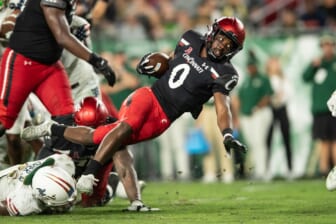 Equally as important, Ridder’s arm strength is not met with the best accuracy in the draft class. We’ve seen other strong-armed quarterbacks bomb out in the NFL early in their careers because they weren’t able to provide said accuracy. Ridder’s ability to display this in Indianapolis could be the difference between him being a first-round pick or dropping to the middle of Day 2.

An ankle injury during Mississippi’s Sugar Bowl loss to Baylor could place into question his availability for position-specific drills at the NFL Combine. While he avoided serious injury, the star quarterback might want to wait until the Ole Miss Pro Day to throw.

Either way, armchair scouts are all over the place when it comes to this talented signal caller. Some believe he should be the first quarterback off the board. Others don’t view him as a first-round talent.

The biggest issue plaguing Corral is the fact that he was a one-read quarterback under Lane Kiffin in Mississippi. That offense relied more on the run-pass option, leaving vulnerabilities when it comes to actually progressing off his first read. If Corral is able to work out at the combine, this is something scouts will pay the most attention to.

Accuracy, decision-making, arm strength and progression are four things that stood out for Strong during his days with Nevada. It’s also what makes him a strong prospect and one of the most interesting quarterbacks of the draft class.

At issue here is his inability to be a dual-threat quarterback in a league that’s trending in this direction. He also struggles with pocket awareness and can’t get past his first read when the pressure is on. While Strong won’t break any NFL Combine 40-yard dash record, his mobility will be something to watch in Indy.