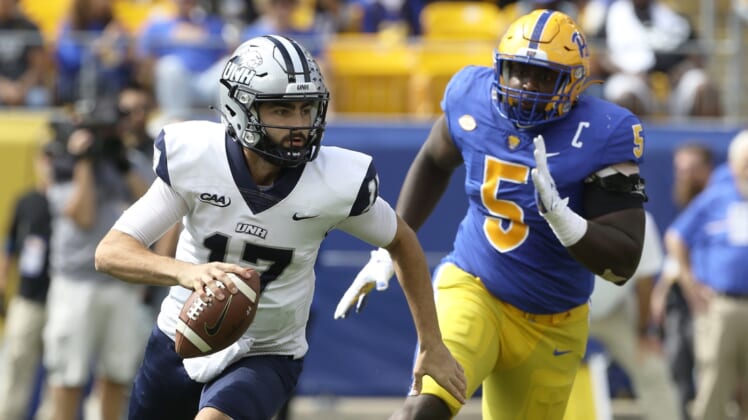 Kenny Pickett threw for 403 yards and five touchdowns and Pittsburgh set a school record with 707 yards of offense in a 77-7 rout of visiting New Hampshire in a nonconference game on Saturday.

Pickett completed 24 of 28 passes for the Panthers (3-1), while Jordan Addison had six receptions for 179 yards and three touchdowns. Rodney Hammond Jr. rushed for 100 yards and three scores and Israel Abanikanda ran for 75 yards and one score. Pitt’s previous record was 654 yards against Virginia Tech in 2018.

The FCS member Wildcats (3-1) were held to just eight first downs and 160 total yards by the Panthers, who jumped out to a 28-0 first-quarter lead.

After Pitt scored a safety on New Hampshire’s opening series, Pickett capped an eight-play, 77-yard drive with a 1-yard touchdown run to make it 8-0 before Ben Sauls missed the extra-point attempt.

Pittsburgh’s defense extended the lead when Damarri Mathis stepped in front of Bret Edwards’ pass and returned it 35 yards for a 14-0 lead before Sauls missed a second straight PAT.

Abanikanda’s 15-yard run capped a seven-play, 61-yard drive for a 21-0 lead after Sam Scarton made the extra point.

The Panthers pushed their lead to 28-0 in the final minute of the opening quarter when Shocky Jacques-Louis caught a 12-yard touchdown pass from Pickett.

The Wildcats got on the scoreboard on their next drive on Edwards’ 4-yard touchdown pass to Sean Coyne just five seconds into the second quarter.

The Panthers made it 35-7 on Pickett’s 24-yard strike to Jordan Addison with 11:17 left in the half. Three minutes later, Pickett and Addison connected on a 47-yard touchdown pass for a 42-7 lead.

Pickett extended the lead to 49-7 with a 7-yard touchdown pass to Taysir Mack with 11 seconds left in the second quarter.

Addison found the end zone for the third time when he caught a 46-yard pass from Pickett less than two minutes into the third quarter for a 56-7 lead.

Beckett was then replaced by Nick Patti, who led the Panthers to three touchdown drives that were all capped by runs by Hammond.