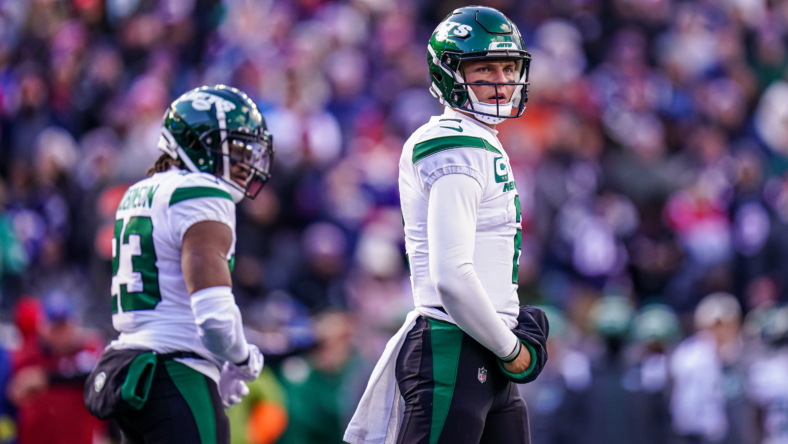 Even if you sat at home drinking beer and chomping on chips Sunday afternoon, you threw for more yards than New York Jets quarterback Zach Wilson in the second half of their brutal loss to the New England Patriots.

The second-year quarterback finished those final two quarters with minus-21 net passing yards. It was part of a larger performance in which Wilson completed 9-of-22 passes for 77 yards in a 10-3 defeat.

Despite its defense playing tremendous football in this one, New York lost primarily due to its offense and a special teams break down that resulted in a game-winning punt return for New England late in the fourth quarter.

Following the game, Wilson was asked whether he felt his play let the defense down. His response? A simple “no.”

We’re now hearing more from sources within the Jets’ locker room. According to Connor Hughes of SNY, several players were frustrated about Wilson’s attitude after the game. The lack of accountability turned some heads, too.

Wilson was largely erratic in less-than-stellar conditions while his counterpart, New England Patriots QB Mac Jones, was able to manage the game by completing 23-of-27 passes. In fact, the second-year Jets quarterback missed several wide-open receivers throughout the game. It led to visible frustration on the part of wide receivers Garrett Wilson and Denzel Mims directed at Wilson during the game.

However, there’s a larger-scale problem at hand in Jersey. Robert Saleh’s defense played well enough to win this game and move the Jets to 7-3 on the season. Instead, it’s the offense that let the Jets down. In fact, New York had more punts (10) than first downs (nine) in this game. That’s among the most pathetic offensive stats we’ve come across in the modern history of the NFL.

Let’s put this into perspective for a second. New York finds itself at 6-4 on the season and is currently tied with the Cincinnati Bengals for the final wild card spot in the NFC. It’s the best 10-game start for this organization since all the way back in 2010.

But with that comes expectations. It’s the idea that every part of the team should take responsibility when things are not going well. We didn’t see that from Wilson following Sunday’s loss despite pretty much the entire postgame interaction with the media being about the sophomore signal caller.

“I don’t know. We couldn’t run the ball, either, so there’s a lot of things that we need to look at to see if we can find some efficiency on offense,” New York Jets head coach Robert Saleh on whether Wilson is holding the team back.

This does not seem like a glowing endorsement of the young quarterback. We fully understand that there’s growing pains for second-year quarterbacks in a position to lead. But when given the opportunity to actually lead by example for the first time in his career, Wilson passed off the blame.

It seems that his smug attitude and lack of accountability is dividing the New York Jets’ locker room. That’s not a great thing with the team coming off its bye while facing upcoming games against the Buffalo Bills and Minnesota Vikings.