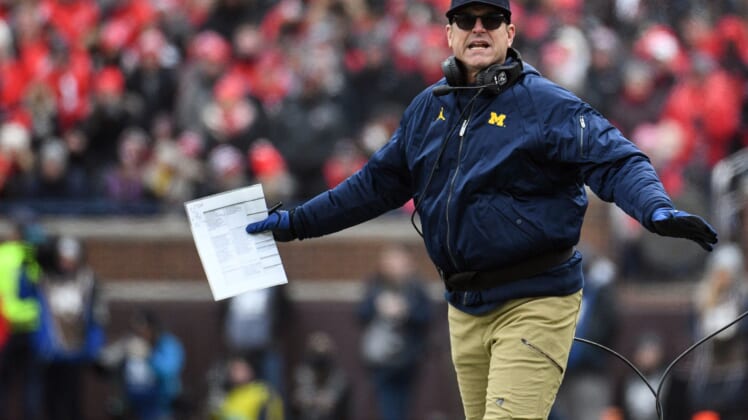 The New York Jets have fired Adam Gase, the most inevitable move of the NFL’s coaching cycle. With Gase now out of the picture, the Jets can begin searching for their head coach to oversee the team in 2021 and well into the future.

It’s been 10 years since the Jets last made the playoffs and their last winning season came under Todd Bowles in 2015. Following years of misery for this franchise and fan base, New York will likely be seeking to make a big splash with its hiring.

Of course, hiring a marquee name isn’t always the right decision. As the Jets conduct their coaching search, it will be crucial to this team’s long-term success to find someone with a great mind, leadership skills and the temperament for the position.

As the New York Jets begin the process of finding a head coach, it seems they might already have specific characteristics in mind. Coming off Gase’s tenure, the Jets are reportedly looking for an alpha dog coach, someone with a strong personality and name recognition.

Whether or not that’s the right approach to take might not matter. It’s also worth noting that team owner Woody Johnson adores Jim Harbaugh. While he has kept his hands out of football operations recently, serving as the United States ambassador to the United Kingdom under the President Trump administration, that could change with President-elect Joe Biden taking over in January.

Harbaugh certainly brings name recognition and he would have no issue with the New York media. The 57-year-old coach is reportedly thinking about an NFL return and is already receiving interest from clubs. In fact, an unidentified team is already doing extensive background work on him.

There’s an undeniable track record with Harbaugh. He posted a 44-19-1 record with the San Francisco 49ers, helping take the team to three NFC Championships and one Super Bowl appearance. However, he has been a disappointment at Michigan (49-22, zero Big Ten titles) in six years and he burned a lot of bridges in San Francisco.

Harbaugh served four-year coaching stints at Stanford and with the 49ers. With his sixth season at Michigan coming to a close, he is once again in limbo. He could be a successful NFL head coach, he already proved it once, but there are legitimate questions about how long he might last before both sides want to part ways.

Sometimes you need to be willing to take risks. That’s what the Los Angeles Rams did in 2017, hiring a largely unrecognized Sean McVay and making him the youngest head coach in the NFL modern era. All the 30-year-old did was go on to win Coach of the Year in 2017, an NFC championship in 2018 and orchestrate a great offense that is hamstrung by a below-average quarterback.

Joe Brady only offers one year of experience as an offensive coordinator in the NFL. It makes him a greater risk since he is less of a proven candidate than so many other coaching candidates available this offseason. With that said, it’s better to be too early on a hire than too late. Besides, his success is incredible.

Brady began his coaching career at William & Mary, overseeing the linebackers from 2013-’14. Following the two-year stint, he served as a graduate assistant at Penn State for the next two seasons. Catching the eye of Sean Payton, he joined the New Orleans Saints as an offensive assistant and held that role for two years.

In 2019, the LSU Tigers hired Joe Brady as their passing game coordinator and wide receivers coach. It’s a decision that changed the entire program and impacted the futures of countless players.

Coming off a record-breaking season and a national championship, Brady was hired by Matt Rhule to serve as Carolina’s offensive coordinator. Despite running an offense that is limited by Teddy Bridgewater’s ceiling as a passer and playing without All-Pro running back Christian McCaffrey for most of the season, this offense has shown plenty of explosiveness and caused problems for defenses.

It’s possible the Jets, like other NFL teams, require Brady to prove himself another year as an NFL offensive coordinator. If one team hires him this offseason, though, every other organization could live with regret for years to come.

Relationships matter, especially in the NFL. If general manager Joe Douglas gets to pick who becomes the New York Jets head coach, his history becomes very relevant. The Jets Wire‘s Tyler Greenawalt highlighted coaching candidates who worked with Douglas and it adds to the reasons why Wink Martindale should be considered.

Martindale started his coaching career at the college level, working his way from serving as an assistant at Notre Dame (1994-’95) to climb the ladder as a defensive coordinator at Western Kentucky (2000-’03). He made his way to the NFL in 2004, serving as the Oakland Raiders linebackers coach across four seasons. Following a two-year stint in Denver, he joined the Ravens before being promoted to defensive coordinator in 2018.

Since putting him in charge of the defense, Baltimore ranks top-10 in fewest points and yards allowed in each of the past three seasons. He loves to send the blitz, utilizing edge rushers to make life difficult for opposing quarterbacks.

If Martindale is hired as head coach, he would reportedly target Clemson Tigers offensive coordinator Tony Elliott to join his staff as the play-caller. It’s believed he could target former NFL head coaches Lovie Smith and Marvin Lewis for additional coaching experience.

Following Matt Rhule’s success with the Carolina Panthers, NFL teams are looking for the next head coach who can help build a team. Campbell, who has spent his entire coaching career at the college level. After building successful programs with two different teams, he is near the top of NFL coaching candidate lists.

Campbell earned his first opportunity to be a head coach at Toledo. With the Rockets, the team went 9-4 in his first season at the helm. While Toledo dropped to a seven-win season the following year, it then finished with consecutive nine-win seasons.

He took over at Iowa State in 2016, finding himself a project to work on. After a 3-9 season in his first year, the Cyclones rebounded in 2017 with an 8-5 record and a Liberty Bowl victory. The following year, Iowa State went 8-5 and followed that up with a 7-6 record.

Campbell’s team has been even better in 2020. The program finished as the No. 10 team in the country, defeating No. 25 Oregon in the Fiesta Bowl on Saturday. While it’s not known what type of coaching staff he would put together, it won’t be long before the 41-year-old is an NFL head coach.

There are plenty of compelling coaching candidates for the New York Jets. Ultimately, the eventual hire is likely to come from the offensive side of the ball. Whether this organization keeps Sam Darnold or drafts a quarterback with the No. 2 pick in the 2021 NFL Draft, a bright offensive mind is needed.

Smith, who is 38 years old, only comes with two seasons as an offensive coordinator on his resume. However, he proved he could climb the coaching ladder with the Titans, earning a promotion in almost every year he has worked for the organization.

The Titans are known for running the football with Derrick Henry, but this offense also loves the play-action attack. It’s been incredibly effective in each of the past two seasons, with Tennessee ranking near the top of the league in major categories.

There will be plenty of competition for him. The Houston Texans, Atlanta Falcons and Detroit Lions are all interested in making him their head coach.

Smith is a personal favorite and the hire I would strongly consider if he interviews well. Hiring Smith as the New York Jets head coach would be the first step in our blueprint for rebuilding this team in the offseason.

According to NFL Network’s Tom Pelissero, the New York Jets have requested permission to interview Matt Eberflus. As the architect of one of the NFL’s top defenses, the 50-year-old will likely generate plenty of interest for head coach openings this offseason.

Eberflus started his coaching career as a student assistant at Toledo, working for the program he grew up rooting for and watching. He worked his way up the ranks, climbing from graduate assistant (1993) to recruiting coordinator (1994-’95), outside linebackers coach (1996-’98) and then defensive backs coach (’99-2000).

He made hsi way to the NFL in 2009, serving as the linebackers coach for the Cleveland Browns. He joined the Dallas Cowboys in 2011, serving a prominent role on the defensive side through the 2017 season.

Eberflus has been instrumental in the development of star linebacker Darius Leonard, while also helping several other players make tremendous strides. This past season, the Colts allowed the eighth-fewest total yards (332.1) and 10th-fewest points (22.6) per game.