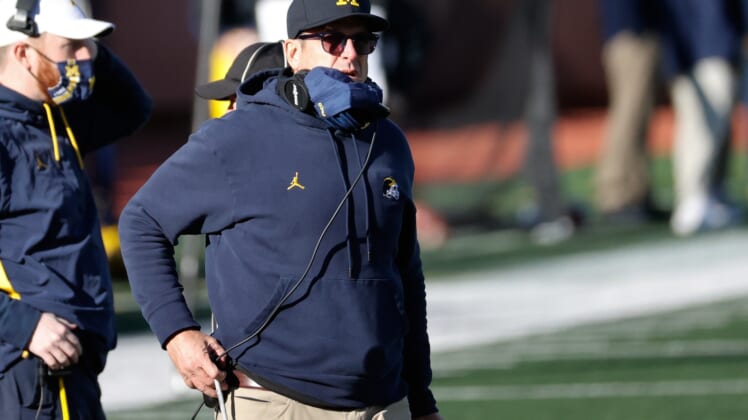 Jim Harbaugh and his Michigan Wolverines just finished up shop on a disastrous 2-4 season. The old ball coach could very well be out of a job in Ann Arbor, leading to NFL rumors that a move to the pros might be in the cards.

To say that Harbaugh’s tenure in Michigan has been a disappointment would be an understatement. He finishes up his first six seasons in that role with a 49-22 record and having lost four consecutive bowl games. For the first time since 2014, Michigan won’t be playing postseason football.

If Jim Harbaugh were to leave the Wolverines for the NFL, multiple media reports indicate that a plethora of teams are interested in his services. Some are already doing their homework.

As of right now, two teams in that of the Texans and Falcons will be looking for new head coaches. At least a half-dozen other teams could jump into the fray. It’s in this that we look at the top-five potential landing spots for Jim Harbaugh should the former San Francisco 49ers head coach make his way back to the NFL.

Related: Top 100 players in the NFL

It really is something. Fresh off firing Bill O’Brien, these Texans are in danger of wasting the otherworldly talent that is quarterback Deshaun Watson. Despite his team’s struggles this season, the former Clemson star has been downright tremendous. He put up nearly 400 total yards in a Week 15 loss to the Colts and has tallied 30 total touchdowns and six interceptions in 14 starts this year.

Obviously, the Texans’ brass needs to find an offensive-minded head coach to take over long-term. Watson himself will have a say. If so, it makes perfect sense for Jim Harbaugh to see his next stop be in Houston. Here’s a guy who has had success with all sorts of different quarterbacks, Andrew Luck and Colin Kaepernick included.

Should these Jets earn the top pick in the 2021 NFL Draft (not a certainty), they will become a highly-coveted option for big-name head coaching candidates. NFL rumors also suggest that New York will be going after a big name on the offensive side of the ball. That’s all dependent on the Jets adding consensus No. 1 overall pick Trevor Lawrence come April.

Even if the Jets were to bring in Lawrence to replace the embattled Sam Darnold, they’d still need to find a ton of upgrades on both sides of the ball. However, pairing Lawrence with Jim Harbaugh and the staff he’d bring in would be a tremendous start for this long-downtrodden franchise.

NFL rumors around Philadelphia suggest that these Eagles will ultimately replace Super Bowl-winning head coach Doug Pederson after yet another down season. Primarily, the powers that be within this organization can’t be happy with how Pederson has overseen the regression from recently-benched quarterback Carson Wentz.

Related: Doug Pederson on the outs?

Whether Wentz is back in Philadelphia next season remains to be seen. Stud rookie Jalen Hurts could actually be under center when Week 1 of the 2021 campaign comes calling. Either way, Jim Harbaugh would be a tremendous fit here. Philadelphia has a stud young back in Miles Sanders. Harbaugh’s offense caters to that type of talent in a big way. And if Hurts were to get the call, he’d benefit big time from Jim Harbaugh being brought aboard.

4. Atlanta Falcons give it one final go with Matt Ryan and Jim Harbaugh

A lot is up in the air right now in Atlanta. Following the firings of head coach Dan Quinn and general manager Thomas Dimitroff, owner Arthur Blank said that the next coach and general manager will decide on Matt Ryan’s future. At this point, it’s hard to imagine the 35-year-old Ryan wanting to take part in a long-term rebuild.

That’s where Jim Harbaugh comes into play. It’s also why NFL rumors linking him to the Falcons’ coaching job will be widespread. Imagine what Ryan would be able to do while finally having that offensive-minded head coach for the first time in his career. It would be exciting to see him play pitch-and-catch with Julio Jones under Harbaugh. It would also be a way for Atlanta’s brass to signal to Ryan that the team is not headed for a rebuild.

In terms of on-field fit, this makes no real sense. Matthew Stafford will more than likely be gone from Detroit this coming offseason. He wants to win now. The Lions are going to enter full-scale rebuild mode. Recent NFL rumors also conclude that Detroit is looking at a defensive-minded head coach in that of 49ers coordinator Robert Saleh.

Off the field, this makes a ton of sense. Jim Harbaugh grew up with his father coaching at Michigan and Western Michigan. He starred in college for the Wolverines. And while it has not worked out in Ann Arbor, a transition to the NFL in his adopted home state could make sense.