The New York Giants hired general manager Dave Gettleman in December 2017 with the hope he would turn the franchise back into a perennial contender. After three disappointing seasons, this might be Gettleman’s last year in New York.

Ultimately, it didn’t change much for New York. The team finished 6-10, finishing second in the worst division in the NFL. With a combined 15-33 record in three seasons under Gettleman, it seems the clock is ticking down and it might be his final run with the franchise.

In his weekly column, NBC Sports’ Peter King touched on the Giants’ front office and shared that he doesn’t believe Gettleman will remain in New York past the 2021 season.

I think Mara felt three years was too short a time to completely judge a GM, particularly when the quarterback was drafted in year two and the new coach picked in year three. I’m sure he thought to be fair, he needed to give Gettleman a year with an established coach and quarterback, and proper weapons for the offense. But as I wrote earlier, the offensive line might be a disaster, and I’m dubious the Giants can have a strong year if the line is bad again. I think Gettleman won’t survive another lost season.

Many fans already believe Gettleman’s tenure should be over. Given four draft classes to work with, including a 2019 class with three first-round picks, the results have been entirely underwhelming. 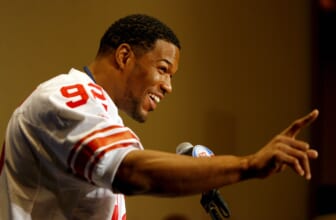 Gettleman received criticism in the 2018 NFL Draft for spending the No. 2 pick on Saquon Barkley instead of taking a potential franchise quarterback or trading down. He tried to redeem himself a year later, selecting Daniel Jones with the No. 6 pick in the 2019 NFL Draft.

Jones has an 8-18 record across two seasons, posting an 84.1 passer rating and leading the NFL in turnovers since entering the league. Josh Allen, the 7th pick, is a leading NFL MVP candidate entering the 2021 season.

Many of Gettleman’s other selections and free-agent signings haven’t worked out. Will Hernandez, the 34th pick in 2018, ranked as PFF’s 53rd-graded guard in the NFL last season. DeAndre Baker, the 30th pick in 2018, was released after an arrest for an armed robbery that charges were later dropped on. Since signing offensive tackle Nate Solder a $62 million contract, he has been one of the worst tackles in the league.

The Giants are trying to make things easier for Jones in 2021. They signed Kenny Golladay to a $72 million contract, more than any other team was offering in free agency. Gettleman also drafted wide receiver Kadarius Toney with the No. 20 pick after trading out of an opportunity to select Justin Fields.

Unfortunately for Jones, the Giants’ offensive line remains a mess and it could prove costly in a pivotal third season. If the Giants don’t make the playoffs, it wouldn’t be a surprise if Gettleman and Jones are both shown the door next offseason.