New York Giants quarterback Daniel Jones is rightfully excited about the opportunity to work with Brian Daboll. While the organization is hoping it leads to a breakout for the former No. 6 pick, the front office already seems to know his days with the Giants might be numbered.

The new regime is saying all the right things publicly. After being hired, general manager Joe Schoen acknowledged the previous regime didn’t do enough to help Jones and that a better supporting cast allows the young quarterback put his true talents on display.

Daboll is also taking a positive approach. Hired because of his phenomenal work with Josh Allen, New York’s head coach is already working on a playbook that includes input from the Giants’ quarterback. However, the franchise also isn’t ready to make a real long-term commitment to the 24-year-old.

According to Jordan Raanan of ESPN, the Giants are increasingly unlikely to exercise the fifth-year option on Jones for the 2023 season. Both Jones’ on-field performance and the cost of the fully-guaranteed 2023 salary are the reasons behind it.

“It seems likely they will pass since he’s yet to show any real consistency in his first three seasons as a starting quarterback and it would mean guaranteeing him $20-plus million for 2023. It seems inevitable they let Jones play it out this year and if he has a great season, that will present a good problem.”

Related: Why Kayvon Thibodeaux and Ikem Ekwonu could be perfect for the New York Giants

New York could further signal its feelings on Jones in free agency. There are a variety of quarterback options available who can either serve as a bridge quarterback or replace Jones assuming he struggles.

Everything will be put on his shoulders in 2022. Surrounded by a better offensive line with a healthy cast of weapons and great coaching, whether or not Jones lands a lucrative contract next offseason will all depend on him. 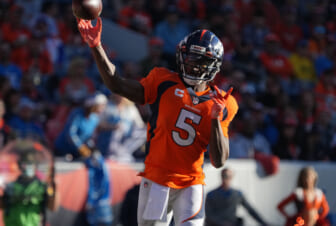