The New England Patriots go into the 2021 offseason looking to upgrade their receiver room. Here are three trades the team could make to improve the position. 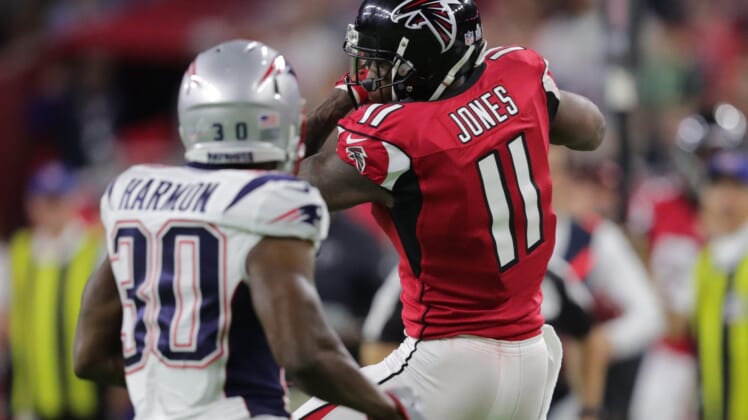 The New England Patriots enter free agency with a depleted wide receiver corps after Julian Edelman suffered a knee injury last season that could keep him out to start the 2021 season. This comes after a season where their top wide receiver Jakobi Meyers didn’t record a receiving touchdown.

The Patriots have $64.92 million in cap space and are most likely going to spend some of that money on a wide receiver. This could be beneficial if one of the NFL’s star wide receivers is made available or wishes to go to a new scenery for a fresh start.

New England could look to improve at receiver in free agency, but there are alternative options in a trade who’d be significantly more impactful than almost anyone who could be had on the open market. Here are three wide receivers the New England Patriots should target during the 2021 offseason.

Odell Beckham Jr. has been linked to the New England Patriots for years now. Bill Belichick has shown interest in making a move for Beckham in previous years, but never got the job done for Tom Brady when he was with the team.

Patriots rumors in the past suggested that the team almost acquired Beckham from the New York Giants, but New York got cold feet and pulled out. Going into this offseason, it would not be surprising if they tried to make an effort to trade for him again.

However, Browns’ general manager Andrew Berry reaffirmed his excitement of having the 28-year-old wide receiver back next season. Things can change quickly in the NFL and the Browns could have a good reason to trade Beckham to New England if they set their sights on improving their defense.

The Browns have been mentioned as a possible destination for New England Patriots cornerback Stephon Gilmore and maybe the two teams could pull off a major blockbuster trade. The Patriots need a clear number one wide receiver and the Browns are looking to bolster their defense.

Those two needs would be met with a Beckham-Gilmore swap. It may sound outlandish, but the deal itself makes sense for all parties. Cam Newton and Beckham are close friends and if Newton returns to New England, it could be an appealing situation for Beckham.

As of now, there are no indications that Cleveland will look to move their star wide receiver, but if the New England Patriots offer Gilmore and a high pick, there could be a slight chance they can pull off a move.

After the New Orleans Saints’ season ended against Tom Brady and the Tampa Bay Buccaneers, NFL Network’s Ian Rapoport said he “wouldn’t rule anything out” when it comes to Michael Thomas’ future with the team.

However, it seems unlikely that the Saints would trade Thomas before June 1 due to the dead cap that would incur due to a trade. It seems more reasonable to think it would be a post-June 1st trade, which would come far after free agency and the draft.

The relationship between the 28-year-old wide receiver and the Saints seems to be a little rocky after everything that occurred last season, so it’s not hard to imagine a scenario where the team moves on from him before he enters the wrong side of 30-years-old.

Thomas would be an ideal wide receiver for the New England Patriots as they lack a player that can create separation and make a huge impact on the game. The two teams have made deals before with Brandin Cooks and Akiem Hicks, so there is a history to suggest they could be trade partners once again.

Thomas would most likely garner a major haul for the Saints, so making a trade could be tricky but worth it. New England could offer wide receiver N’Keal Harry, a future first-round pick, and another good pick. Whether that would be enough is unknown, but it’s certainly something they should explore.

While the New England Patriots trading for Julio Jones is unlikely, they still have the cap space to get it done. Jones is coming off of a year where he tallied 51 receptions for 771 yards in only nine games due to injuries sustained during the season.

Any trade for the star wide receiver would most likely take a first-round pick and at least another mid to late-round pick. Another tricky element to this is the fact that the Falcons would save about $15 million more in cap space if they were to wait until June 1 to execute a Jones trade, per Over the Cap.

In any event, NFL.com writer Adam Rank had Jones in a list of “Five NFL stars who SHOULD be traded this offseason” and many reasons such as Calvin Ridley’s emergence were brought up.

Jones is now 32 years old and the window of him winning a championship and continuing as one of the top wide receivers in the NFL is close to coming to an end. The Atlanta Falcons should trade Jones before his value starts to diminish and while the benefit of clearing cap space this year in particular is great.

No matter what the Falcons decide to do with Jones this offseason, they have the insurance of Ridley and he is definitely ready to take the next step of being a yearly 1,000-yard receiver for the team.

The Patriots could offer a similar deal proposed above by including Harry, a first-round pick, and another pick. Much like every other good wide receiver, making a deal would be worth it considering their current situation at the position.

The next two months are bound to be insane due to major cuts around the league ahead of free agency and a loaded draft class for quarterbacks. Some teams could be put into tough decisions due to the salary cap and that could help the New England Patriots if a star wide receiver ends up on the market.