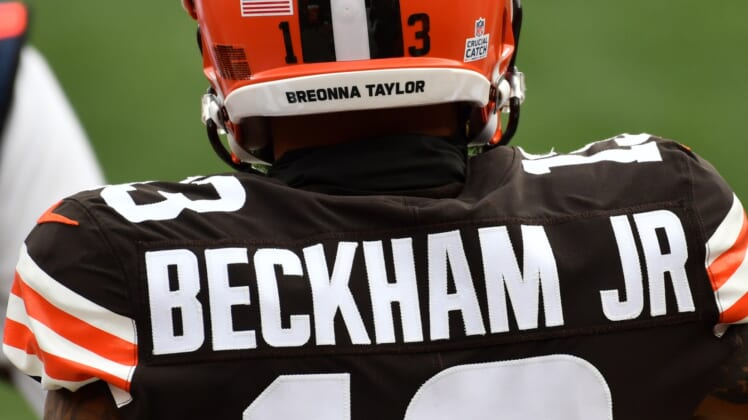 Cleveland Browns star Odell Beckham Jr. has been at the center of NFL rumors and trade speculation for years. With another offseason set to begin, the former All-Pro receiver could see his name thrown around in trade rumors once again.

Ever since the Browns acquired OBJ, things haven’t worked out great for the playmaking receiver. Cleveland traded Jabrill Peppers, Kevin Zeitler along with a first- and third-round pick in the 2019 NFL Draft, hoping it would a change of scenery would help him rediscover his All-Pro form. Instead, it’s been two years of disappointment.

Coming off consecutive seasons ruined by injuries, all while the Browns emerge as NFL contenders, Beckham Jr. could soon hear his name in trade rumors once more.

Cleveland.com’s Mary Kay Cabot wrote about the ongoing situation in Cleveland. While the organization still believes in Odell Beckham Jr, one of the team’s primary beat reporters suggested the Browns may need to consider trading him this offseason.

The reasoning goes beyond OBJ’s injuries. While the Browns are projected to be $18 million under the 2021 NFL salary cap, there are a lot of moves that need to be made. Cleveland needs to find impact talent at linebacker and must add pass rushers, moves that require spending. Not only that, but Baker Mayfield is entering the fourth year of his rookie contract and will likely be seeking a lucrative extension after helping this team win its first playoff game in decades.

Trading Beckham Jr. this offseason would create $15 million in cap space. That’s the kind of money that the front office could dedicate toward a top pass rusher in free agency or it could be used to sign a No. 2 cornerback to upgrade the secondary.

Cleveland’s offense also performed well without its No. 1 receiver. Following the Week 9 bye, additional time to adjust the offense after OBJ tore his ACL, this team improved. The Browns averaged 245.6 passing yards per game and Baker Mayfield had a 98.7 quarterback rating over that stretch and had a 20/2 TD/INT ratio without his favorite weapon.

Entering the offseason, Beckham Jr. will be working on rehabbing his knee in an effort to return to form. But the 28-year-old recorded just 319 receiving yards and three touchdowns in six games before leaving early in Week 7.

This is the same receiver who contemplated retirement in 2017 and played the entire 2019 season with a significant groin injury.

The Browns may still believe that Odell Beckham Jr. can still be a high-end No. 1 receiver, but he hasn’t shown that in several years. Given all the other needs on the roster and the club’s limited resources to address them, a trade might eventually be in everyone’s best interest.