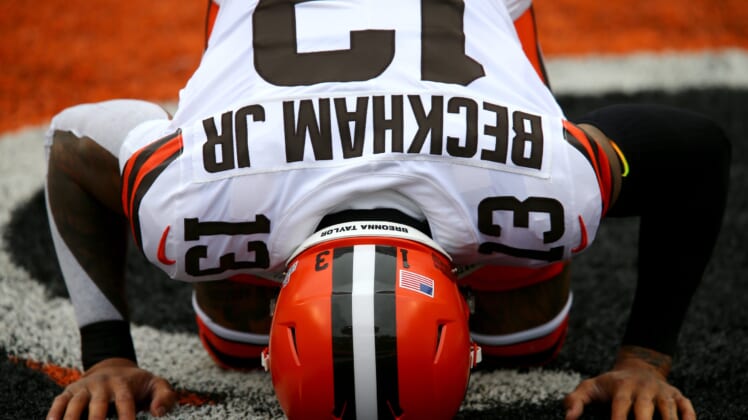 Prior to Odell Beckham Jr. suffering a torn ACL back in Week 7, NFL rumors had pointed in the direction of the Cleveland Browns entertaining trade offers for the enigmatic receiver.

Over the course of his first 23 games as a member of the Browns, Beckham Jr. never really caught fire like we saw during his New York Giants days. Baker Mayfield also performed much better under center once OBJ was lost for the season.

It really was an exercise in understanding the value of a true No. 1 receiver and finding a happy medium between that and locking on to a pass-catcher too much.

Fresh off his Browns putting up their best season in over a quarter-century, potential NFL Coach of the Year Kevin Stefanski touched on the OBJ situation. He really didn’t mince words, either.

“I texted with him this morning. I know he’s working really hard to get better in his rehab. I’m excited to get him back here,” Stefanski said on his season-ending presser with the media. “I know it was not easy for him being away from his teammates, especially as these games got bigger and into the playoffs. I know he definitely wanted to be a part of it.”

That doesn’t seem like a head coach ready to move on from one of his most-talented players. Despite the fact that OBJ caught a mere 23 passes for 319 yards in seven games this past season, there’s now every reason to believe he’ll be back with the Browns. At least, that’s what the Browns want us to believe.

This doesn’t mean NFL rumors will die down as it relates to a potential Odell Beckham Jr. trade. That’s pretty much been the case since the 2017 season with the New York Giants.

Even then, one has to wonder whether Cleveland can justify paying OBJ the $15.75 million he’s set to count against the salary cap next season. After all, his numbers are not representative of someone earning that type of cash.

As you can see, OBJ’s numbers plateaued prior to him suffering a fractured ankle four games into the 2017 campaign with the Giants.

There’s no telling how that injury has impacted him. What we do know is that the five-time 1,000-yard receiver just has not found a great relationship with Mayfield in Cleveland.

Stefanski is a smart man. He knows full well that admitting OBJ could be on the trade block does absolutely nothing of value moving forward. It’s the PR game at its finest.

Cleveland currently finds itself with an estimated $24.38 million in cap room, depending on what the 2021 NFL salary cap is actually going to be set at. It’s not a great figure given the impending free agents these Browns must think about re-signing after a surprising run to the AFC Divisional Playoffs.

Starters such as edge rusher Olivier Vernon, safety Karl Joseph and wide receiver Rashard Higgins are important cogs. Each one is set to hit the free-agent market come March.

As for our previous note about Mayfield’s production this season, the splits with and without OBJ are eye-opening.

It’s rather clear that Mayfield stopped forcing the ball to one specific receiver once OBJ was lost to a torn ACL. While the pass-catcher isn’t necessarily to blame for these splits, it’s something the Browns brass should take into account.