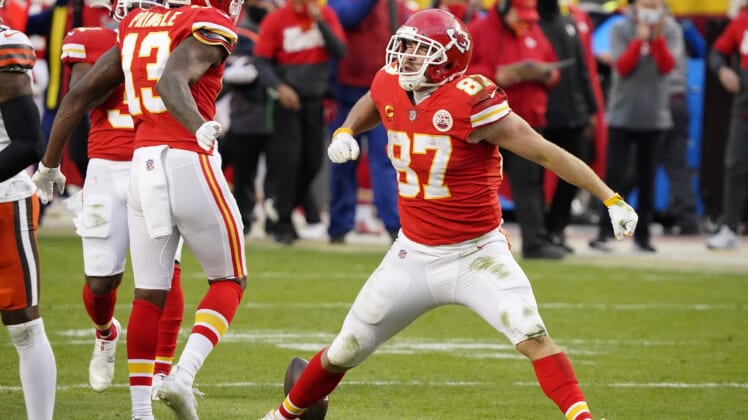 The Kansas City Chiefs are headed back to the AdFC championship, following a wild victory over the Cleveland Browns with twists and turns that no one saw coming.

Early on, it looked like the Chiefs would run away with this one. They led 16-3 with only a few minutes left in the first half. After the Browns coughed up the football at the goal line for a touchback, followed by a Chiefs’ field goal before the half to take a 19-3 lead, Cleveland’s fate seemed determined.

The Browns found a way to answer, with Baker Mayfield and Nick Chubb driving down the field to make it a nine-point deficit. Just as the Chiefs were on the verge of answering, one play changed everything. Cleveland suddenly had a new life with Patrick Mahomes ruled out, opening the window for a stunning upset.

Kareem Hunt got his revenge, punching in the score to make it a five-point deficit. On the next drive, Chad Henne threw an interception in the end zone to give Ohio even more hope. But it was all for not. Cleveland’s next drive stalled and with the season on the line, Henne pulled off the heroics no one saw coming.

Here are the winners and losers from the Kansas City Chiefs’ 22-17 victory over the Cleveland Browns.

Coming off the greatest single-season performance from a tight end in NFL history, it’s no surprise to see Travis Kelce do things like this. Frankly, 100-yard outings are basically the standard for the league’s best tight end. It doesn’t even matter who the opponent lines up against him. He torches linebackers, overpowers safeties and leaves top cornerbacks on the ground.

When Kansas City’s offense needed a big play, Kelce came through. Whether it was Mahomes or Henne dropping back and launching bullets, the future Hall of Fame tight end got open and snagged the football for a big gain. He finished Sunday with a team-high 11 targets, turning them into eight receptions for 109 yards and the game-deciding touchdown. If Mahomes is back for the AFC Championship Game, Kelce can start counting down the days until he faces a defense he scored two touchdowns against earlier in the year.

Getting Denzel Ward back was monumental for Cleveland’s defense. Quarterbacks completed just 31% of their passes when targeting a pass-catcher in single coverage against Ward over the last three seasons, per PFF. That is a special talent and it could have made a huge impact on Sunday. Instead, Ward will be remembered for the big plays he gave up.

First, getting wrecked in man coverage against Kelce. Whatever caused this 5-foot-10, 190-pound cornerback to be lined up against a 6-foot-5 tight end, it was a terrible mistake. That alone directly led to a touchdown, but Ward wasn’t done getting put on an opponent’s highlight reel. He got Moss’d by Tyreek Hill on a 50-50 ball, unable to do anything but watch the Pro Bowl receiver do something phenomenal. Ward didn’t make many mistakes in this game, but the few times he got beat proved fatal in a one-score defeat.

Tyrann Mathieu is the heart of the Kansas City Chiefs. He makes sure his teammates are in the right positions, he provides energy on the field and sideline and he makes plays. We saw all of that Sunday in the divisional round, but it was the plays he made on the field that really stood out against Cleveland.

The instinctual plays and Mathieu’s ability to read a quarterback’s eyes are incredible. Just as noteworthy, his willingness to come up and make plays against the run. He single-handedly stopped multiple runs against the Browns, which says a lot against one of the NFL’s most explosive rushing attacks. Whether it’s big plays like the interception or the little things that don’t always appear in the box score, Mathieu is a big reason why the Kansas City Chiefs are so tough to beat.

We talk about it every year. The fact that the NFL continues to keep the touchback rule on a fumble in place is absurd. If Rashard Higgins loses the football and it rolls out anywhere else on the field, Cleveland keeps possession. Instead, this absurd policy resulted in a potential 10-point swing.

Of course, it’s not just about the rule. Daniel Sorensen clearly lowered his helmet to initiate contact and should have been called for targeting. If this happened in college football, the play gets reviewed and the correction is made. But that’s apparently not something the NFL is interested in. The touchback rule itself is ridiculous, but the fact that the officials missed this blatant helmet shot and replay couldn’t do anything about it is what made Sunday’s game a miserable one for the NFL rulebook.

When Mahomes left the game with a concussion, everyone wrote the Kansas City Chiefs off. This was going to be one of those freak moments that derailed the defending Super Bowl champions, allowing someone else to snag the Lombardi Trophy this season. With two minutes left in the game and Kansas City’s offense facing a third-and-14, fans anticipated Henne wouldn’t do much and the Browns would get the football back with a chance to win it. Then, the unthinkable happened.

We’ve seen Mahomes do things like this plenty of times, but Henne is a 35-year-old quarterback. He pulled magic out of his hat, evaded pressure and made the play that Kansas City will remember for quite some time. Then, feeling confident in his veteran, Andy Reid rolled the dice and went for it on fourth down inside Chiefs’ territory.

Henne did the miraculous again and the Kansas City Chiefs are headed to the AFC Championship Game because of him.