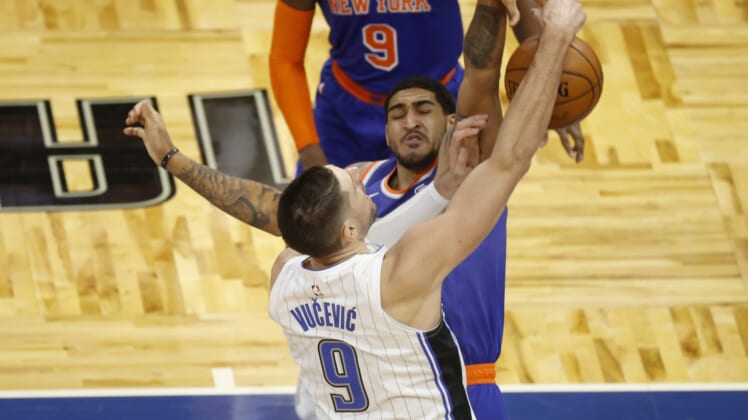 NBA rumors are buzzing with the trade deadline approaching as championship contenders look for that big piece that puts them over the top. Unfortunately for teams like the Boston Celtics and Toronto Raptors, All-Star center Nikola Vucevic likely won’t be available for a blockbuster deal.

After the James Harden trade, general managers turned their focus to Bradley Beal. But the Washington Wizards aren’t bailing on their star guard, leading to less impact talent being available before the NBA trade deadline. With so many teams close in the standings and several Eastern Conference contenders desperate for a great big man, front offices set their sights on Vucevic.

The Ringer’s Kevin O’Connor spoke to multiple team executives throughout the league, many in front offices who would love to acquire Vucevic. But Orlando reportedly isn’t budging on their insistence that he won’t be traded, despite the fact he would instantly be one of the top players on the market.

Vucevic continues to play at an incredible level, coming off a 2019 campaign that earned him his first All-Star Game appearance. While the Magic (13-18) are near the bottom of the NBA standings, their 30-year-old center is playing the best basketball of his career.

Entering Monday’s action, Vucevic is setting career-highs in points (24.1), defensive rebounds (9.8), steals (1.1) and three-point shooting (2.3) in 31 games. A first-round pick in the 2011 NBA Draft, he has turned into an incredible shooter from beyond the arc. In Vucevic’s first five seasons, he combined to make seven three-point shots. He has made 60-plus in each of the past four years and is on his way to blow past his personal best (98) this year.

The Magic might be better off dealing Vucevic, acquiring a collection of young assets and future draft picks. However, the organization seems confident it can rebound next season with a healthy Jonathan Isaac, Markelle Fultz and the addition of a great pick in a loaded 2021 NBA Draft class.

Vucevic is owed $26 million this season and an additional $46 million divided over the 2021-’22 and 2022-’23 seasons. Given that level of contract control, it’s hard to blame Orlando for keeping him.

For teams like the Celtics and Raptors, they’ll just have to look elsewhere for reinforcements at center.