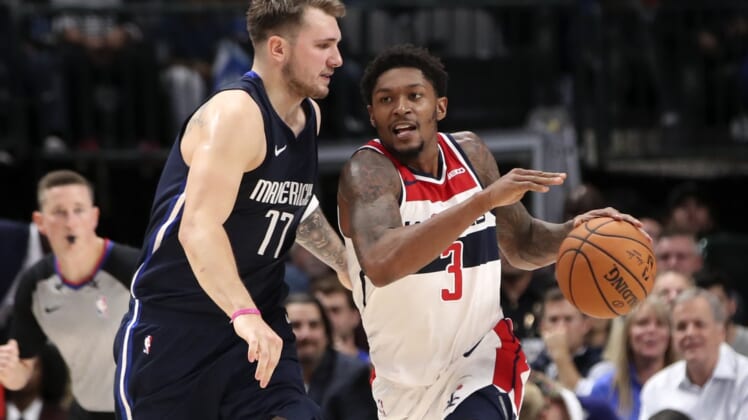 There’s been some talk about a potential Bradley Beal trade from the Washington Wizards over the past several months. NBA rumors relating to a blockbuster deal are not coming from Beal’s camp or the Wizards themselves.

Rather, it’s all about common logic. Beal is now one of the top-five players in the Association. His Wizards are in the midst of what promises to be a vast rebuild. At 27 years old, there’s no telling whether Beal will want to waste his prime years in D.C.

At least for now, it looks like nothing is going to happen on this front over the short-term.

The report comes to us via ESPN’s Adrian Wojnarowski and includes the NBA insider noting that a deal of this magnitude is “unlikely” to happen ahead of the March 25 NBA trade deadline.

This makes more sense right now compared to earlier in the season. Washington has run off four consecutive wins since a 6-17 start to the campaign. Shockingly enough, the Wizards are just 2.5 games out of the eighth seed in what has been a pedestrian Eastern Conference during the 2020-21 NBA season.

For his part, Beal is the NBA’s leading scorer at 32.9 points per game. He’s also contributing 5.2 rebounds and 4.6 assists per outing at 48% shooting from the field.

When will a Bradley Beal trade happen?

If it’s not going to be before the in-season NBA trade deadline, there’s a chance that Washington kicks the tires on a potential blockbuster during the summer. Realistically, it’s all about the trajectory of this team moving forward.

The Wizards might very well feel that they have something in Beal and former NBA MVP Russell Westbrook, the latter of whom has taken a step back this season after being acquired from the Houston Rockets for John Wall.

Even then, this current iteration of the Wizards are nothing more than bottom-end playoff contenders back east. Beal has not seen much team-wide success since Washington made him a top-three pick back in 2012.

There’s also something to be said about market. Las Vegas favors the Golden State Warriors to pull off a Bradley Beal trade. Existing in San Francisco with Stephen Curry and Klay Thompson wouldn’t only lead to consistent NBA title contention, it would give the star guard a huge market.

Golden State also has a lot to offer up should Washington put Beal on the trade block. That includes rookie No. 2 pick James Wiseman and the top-three protected Minnesota Timberwolves first-round pick in 2021 (unprotected in 2022).

The New Orleans Pelicans are also being bandied about as a favorite to land Beal. This could be an attractive option for the All-Star given Zion Williamson’s status as the face of the Pelicans franchise.

Either way, don’t expect reports of a potential Brady Beal trade to die down in the coming weeks simply due to one report. While it remains highly unlikely, the early-season James Harden blockbuster tells us a story of an unpredictable NBA landscape right now.

Click below for more Washington Wizards news and rumors.