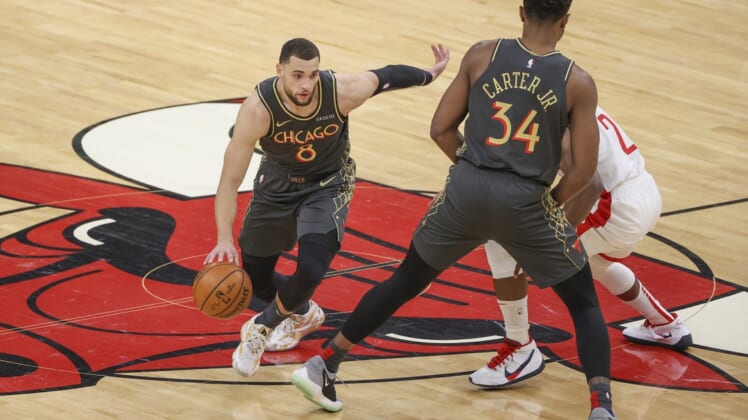 It’s not a secret that NBA rumors have been pointing in the direction of the New York Knicks looking to acquire star power. Newly-minted team president Leon Rose spent his first offseason in that role attempting to bring in the necessary talent to make this long-downtrodden organization relevant once again. It was not to be.

With New York off to a surprising (by its standards) 9-13 start to the 2020-21 season, these rumors are picking up even more ahead of the March 25 NBA trade deadline.

“The biggest edge the Knicks would have over many teams interested is they have $18 million in cap space to absorb a big contract without giving away much salary,” Marc Berman of the NY Post reported Tuesday. “He’s (LaVine) one of many players on the Knicks’ radar, sources contend.”

Talk about coming full circle. It was back in June of 2017 that first-year Knicks head coach Tom Thibodeau, then with the Timberwolves, traded LaVine to the Chicago Bulls as part of a blockbuster package for Jimmy Butler. Indirectly, this helped lead to Thibodeau’s departure from Minnesota midway through the 2018-19 season.

Even then, NBA rumors linking LaVine to the Big Apple make a lot of sense. As Berman noted in his report, New York is able to take on $18 million in salary. This means Chicago would not have to bring back a big-contract player for LaVine.

The Knicks also have draft pick assets to make a trade of this ilk work. That includes multiple first-round selections from the Dallas Mavericks stemming from the Kristaps Porzingis trade.

LaVine, 25, has morphed into a stellar all-around wing in his time with Chicago. The former first-round pick is averaging 26.6 points, 5.3 rebounds and 5.1 assists on a resounding 51% shooting from the field. That includes 42% from distance. He’s a much different player than the “athlete” Minnesota selected with the 13th pick in the 2014 NBA Draft.

NBA rumors: How might a Knicks trade for Zach Lavine look?

LaVine remains under contract through next season. That should enable Chicago to net more in return given he wouldn’t be a rental option for the Knicks.

It stands to reason that New York would have to offer up either its unprotected first-round pick in 2021 or the Mavericks’ first-rounder this coming June and another top-30 pick as a starting-off point for LaVine.

From there, Chicago could take a chance on former lottery picks Kevin Knox and/or Frank Ntilikina. The team might even demand impressive rookie guard Immanuel Quickley.