NASCAR 2021 season predictions: Projecting the 16 drivers in playoffs and champion 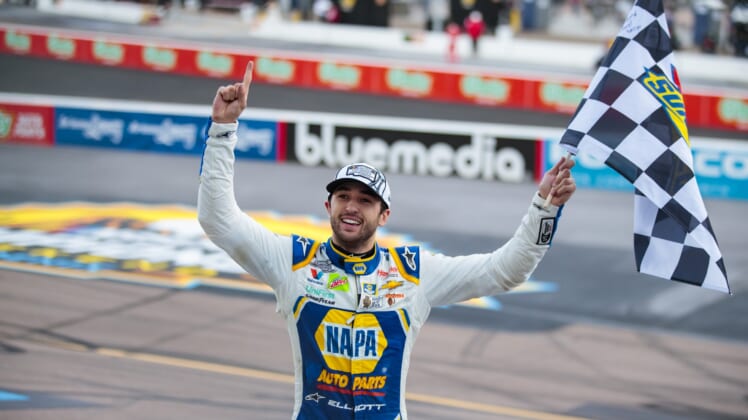 The 2021 NASCAR season is upon us with the Clash at Daytona occurring Tuesday night and the Daytona 500 under a week away. There are many different changes going into this season, such as significant driver movement and a new schedule that will significantly change the landscape of the sport.

There will be new winners and drivers that are on the outside looking in that normally aren’t in that position. Due to new teams entering the sport and an increase of competitive drivers, it could be one of the most competitive seasons we have seen in a long time.

It’s time to make predictions for the season which include the regular season, playoffs round by round, and champion.

Check out our NASCAR season predictions below!

There may be a few surprises in this list of regular-season winners. The talent is more noticeable than ever and with a schedule change, there could be a more balanced amount of wins this season.

Kevin Harvick raced his way to a historic season in 2020 but was unable to capture the magic of a championship. Harvick will still capture wins at four tracks he won last season. He’ll always be in the chase for a title, but it seems unlikely for a 45-year-old driver to keep up that pace of nine wins.

Kyle Busch and Martin Truex Jr. each struggled last season to win races. They won a combined two races, however, the duo will find speed again and start to win races early in the season. Truex will win the most road course races in the regular season and compete with Chase Elliott as the best road course driver.

Busch will be really good this season as he has a chip on his shoulder due to a poor 2020 season. The 35-year-old driver will win at some of his best race tracks, including the site of the 2021 championship race at Phoenix Raceway.

Denny Hamlin, another elite Joe Gibbs Racing driver, will win three races, but he’ll take a step down from last season. Hamlin won a combined 13 races the last two seasons, but a step up in the competition level will bump him down a few. He’ll still pick up wins and win two new races on the NASCAR Cup Series schedule.

Hendrick Motorsports will have a strong season as defending NASCAR Cup Series champion Chase Elliott will win two of the three new road courses at COTA and Road America. Elliott will have high expectations this year and two wins would be disappointing, but he’ll compete each and every week for the win.

Kyle Larson, driver of the No. 5 car, will have a slight adjustment period but will end up having a good regular season alongside Elliott with a win at Bristol Dirt and a redemption win at Darlington. Larson will have an underrated season, even though he wins two times in the first 26 races, and competes every weekend.

Brad Keselowski only winning two races may be a surprise. Keselowski has won three-plus races for five consecutive seasons, but this is just for the regular season, so there is the possibility of some playoff wins. However, this may not be the biggest surprise within Team Penske in 2021.

A bigger surprise than Keselowski only winning two, would be Joey Logano only winning one race. Logano only won two races during the regular season last year but didn’t have much success until the playoffs. He will repeat this in 2021, but the NASCAR playoffs are once again set up for Logano to make a deep playoff push.

Ryan Blaney will also have a similar season by winning the Daytona 500, but he won’t be able to pull off a victory the rest of the regular season. Blaney had a fast car last season at intermediate tracks and should have won more, but the Ford camp as a whole will be down compared to past years.

William Byron winning his first non-superspeedway race at the Coca-Cola 600 would be ironic, considering the past of the No. 24 car. Byron will win the race and have a better season than people expect. The 23-year-old driver has run well in everything he’s ever stepped foot in and will have a significant improvement over last season.

Christopher Bell faces a huge season in his career as he makes the move to Joe Gibbs Racing. Bell will start slow, but eventually hit some of his good tracks in the summer and win his first Cup Series race at New Hampshire. Toyota will be better as a whole and the 26-year-old driver will benefit.

Ricky Stenhouse Jr. and Aric Almirola will both benefit from a superspeedway win to make the playoffs. Almirola would have made it on speed anyway, but Stenhouse Jr. will win a clutch race at the end of the season at Daytona.

NASCAR drivers who missed the playoffs (in order)

Alex Bowman, Austin Dillon, and Tyler Reddick will make it in as the three drivers without wins. Bowman won’t perform badly and be close to the cut-line, but he will not be able to secure a win during the regular season. Dillon and Reddick will each have consistent enough seasons to make the playoffs.

Kurt Busch not making the playoffs might be a surprise to people. Busch is entering what could be his final season as a full-time driver in NASCAR, but his equipment is not up to par with the other drivers surrounding him. The reason he comes in as the first driver out is due to his consistency.

Unfortunately, Matt DiBenedetto won’t be able to get Wood Brothers their 100th win in this scenario, but he will be close numerous times. Another driver trying to give his team an amazing win will also not make the playoffs. Erik Jones will have a good season for the equipment he has, but it won’t be enough for the playoffs.

Bubba Wallace has been a popular pick to make the playoffs, but along with Daniel Suarez, they will miss out in their first year with new organizations. It’s hard to win as an organization in your first year in NASCAR and many bumps in the road will be too much to overcome. Both will race really well and poor at points this year.

Chase Briscoe and Cole Custer will both miss out on the playoffs, but they’ll still find some success this season. Briscoe will win a stage at the Indianapolis Road Course, and Custer will improve on his consistency and development. Both will find more success in the NextGen car and use their learning experience for good.

NASCAR Playoffs: Round of 16 predictions

(Each playoff round will feature the winners of each race, with the amount of playoff points won in that round in parentheses. The exact order of the drivers is the standings after the elimination race)

Kyle Busch, Kyle Larson, and Kevin Harvick will all win races to advance to the Round of 12. Two drivers who don’t win, but have strong a round are Martin Truex Jr. and Joey Logano. The Round of 16 is set up well for them with tracks they have had success at in the past.

Christopher Bell moves to the Round of 12 in his first career playoffs in the NASCAR Cup Series. Tyler Reddick also has the same fate as Bell, but he barely makes it over Alex Bowman, who can’t make up enough ground after struggling at Richmond.

Ryan Blaney ends the season with another disappointing Round of 16 exit. The Round of 12 has good tracks lined up for Blaney, but he won’t be able to get through without some luck from other drivers having trouble.

Aric Almirola and Ricky Stenhouse Jr. won’t have enough speed to sneak their way into the Round of 12, but they will both have decent runs at Bristol. Almirola has the best chance of the two drivers, but still can’t get it done.

NASCAR Playoffs: Round of 12

Martin Truex Jr. will advance to the Round of 8 off of a dominating performance at Las Vegas. Kyle Larson and William Byron both steal clutch victories to make the next round with Larson winning at the Charlotte Roval and Byron at Talladega.

Joey Logano easily makes the Round of 8 off a strong first two races, but Kevin Harvick on back remain in a very tight battle at the Charlotte Roval. Harvick has enough of a cushion, while Chase Elliott and Brad Keselowski each have fantastic races. Kyle Busch barely makes it after struggling in the final two races of the round.

Unfortunately, Byron winning at Talladega bumps out Denny Hamlin, who didn’t get much help from Larson who was 7th in the standings going into the elimination race. Hamlin does not have a strong track record at these race tracks, which will not help him in his quest for a NASCAR Cup Series championship.

Christopher Bell and Tyler Reddick both make it to the Round of 12 in their sophomore seasons, but come up short due to unfortunate luck at Talladega and a decent, not good, race at the Roval. Austin Dillon comes up short with a poor selection of tracks in this round.

NASCAR Playoffs: Round of 8

Kyle Busch and Kyle Larson punch their tickets to the Championship 4 with wins at tracks they have been strong at. William Byron pulls off the win at Martinsville and jumps the field to make his first Championship 4 in the NASCAR Cup Series.

Projecting Byron to make the Championship 4 in his first year of winning a non-superspeedway race is risky, but he has strong tracks in the playoffs and runs well at Martinsville. It may not be the driver people are expecting, but if Byron can take a big enough jump like he’s capable of, it’s not out of the realm of possibility.

Martin Truex Jr. barely makes the playoffs as all four drivers out are within 10 points of him. The playoffs are really tight this year due to the more balanced distribution of playoff points. Truex finishes off strong at Martinsville with a top-5 finish.

Brad Keselowski and Chase Elliott also miss out, but not due to poor performances. They each didn’t have enough at the end to make it, but they are right there until the end. Both of them fall short of their second NASCAR Cup Series championship.

Kyle Busch wins the 2021 NACAR Cup Series championship after beating out Kyle Larson in a competitive battle near the end of the race. William Byron and Martin Truex Jr. have good cars but are unable to compete with the top-2 finishers in the final run of the race.

Larson ends his first season with Hendrick Motorsports just short after a very hot playoff with five wins, while his teammate Byron ends a very successful year to his standards with three wins. Truex Jr. proves he still has it in him to win and finishes with five wins on the 2021 season.

Kyle Busch closes out the season with the most wins with six and a total of 51 playoff points on route to his third NASCAR Cup Series championship.