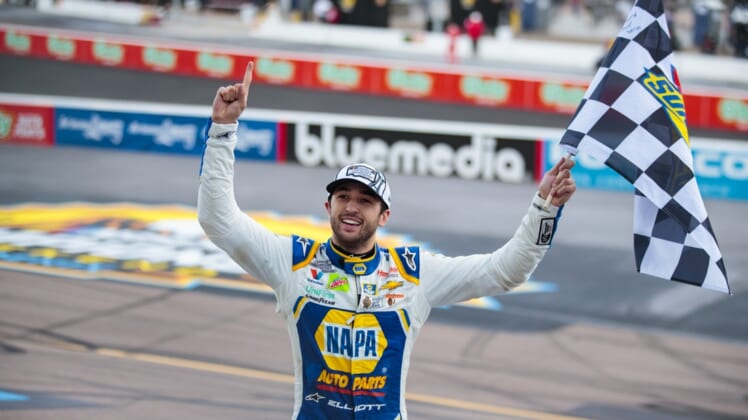 Chase Elliott may be the defending champion in the NASCAR Cup Series, but protecting his status isn’t remotely close to his focal point entering the 2021 season.

“There is no defending,” Elliott said Monday during a video conference with reporters. “We need to be on offense. We need to keep pushing. I think if you’re back on your heels and trying to protect something, I don’t think your mind is in the right place.

“We want more. We’re not trying to play defense. We just simply want more. That needs to be our outlook and keep it as simple as that.”

You might think Elliott would consider the addition of four road course races to the schedule a major advantage. After all, five of his 11 career victories have come on road courses. Elliott has won the last four NASCAR road races, including the Cup Series’ maiden voyage last year on the Daytona International Speedway Road Course, which will host the second points race of the season on Feb. 21 as well as Tuesday night’s Busch Clash (7 p.m. ET on FS1, MRN and SiriusXM NASCAR Radio).

In all, seven of the 36 points races in 2021 will take place on road courses, but Elliott’s outlook might come as a surprise.

“There’s not been one part of me that watched the schedule change, saw seven road courses and thought, ‘Yeah, we’ve got it now,'” Elliott said. “That’s just not how I am. The schedule is what it is. I don’t enjoy having any more or less road courses. I really don’t care where we go. At the end of the day, you have to be good everywhere, and I want to be good everywhere.

“We as a team want to get to the point where we can win on any given week–road course, circle track, intermediate, dirt … whatever it is, we want to be able to win at any time. The great teams and the great drivers are capable of doing that, and I think we are capable doing that. So that’s where my head’s at — trying to be good everywhere.”

NO LOOKING BACK FOR HARVICK AND NO. 4 TEAM

Kevin Harvick topped the NASCAR Cup Series with a career-best nine victories last year. With that total, the driver of the No. 4 Stewart-Haas Racing Ford vaulted past Kyle Busch as the active leader in Cup wins with 58.

Despite winning the regular-season title, however, Harvick failed to make the Championship 4 for only the second time since the introduction of the current elimination Playoff format in 2014. As the 2021 season approaches, Harvick won’t be thinking about what went wrong last year.

“I think, as the season ended and we got about a week through it, I was done and over with it and had a lot to do moving forward,” Harvick said. “In this business, you just don’t have time to dwell on it. If you’re going to continue to be good at what you do, you have to be able to put your mind back to work and take the things that went wrong and make them better — refocus, and you have to use those things as motivation in order to make those particular things better.

“I feel like I’m wasting my breath talking about everything that happened last year, because we’ve talked about what went wrong, and I’ve moved on and tried to be ready for this particular season… (Harvick’s team members) know that I’ll get pretty frustrated if they want to sit and dwell on what happened last year when we’re already into just over a week away from the Daytona 500. They better have moved on. If they haven’t, they don’t talk to me about it.”

HENDRICK MOTORSPORTS CLOSES IN ON RECORD FOR MOST CUP VICTORIES

Petty Enterprises set the standard for victories in the NASCAR Cup Series, but Hendrick Motorsports is closing fast.

The Randleman, N.C.-based team ceased operations after the 2008 season, as seven-time Cup champion Richard Petty took on partners in what is now Richard Petty Motorsports, whose five wins don’t count in the Petty Enterprises total.

Chase Elliott won five races for Hendrick on the way to the series championship last year, and Alex Bowman and William Byron added one victory each to bring the HMS total to 263. Even if Hendrick surpasses the Petty Enterprises total, team owner Rick Hendrick acknowledges that there will only be one “King.”

“The Petty organization will always be kind of the backbone of the sport,” Hendrick said. “Richard will always be the King. We may end up with more wins than they did, but what they’ve done for the sport … He is the kind of person that when you mention his name, it helps our whole sport.

“So I’m a little humble to think that, ‘Hey, I’m going to maybe one day pass his record of wins.’ I would love to, but I don’t know if I’ll ever contribute as much to the sport as Richard Petty and the Petty organization have.”

That changed dramatically when Truex won the April 13, 2019, event at Richmond Raceway. The driver of the No. 19 Joe Gibbs Racing Toyota completed the Richmond sweep in September before winning for the first time at Martinsville in late October.

In June 2020, during last year’s pandemic-interrupted season, Truex won a second straight race at the .526-mile Virginia speedway, giving him four short-track victories over a 14-month period. There remains, however, one glaring hole in Truex’s resume — something he hopes to correct this year.

Truex has never won a superspeedway race. To try to erase that deficiency at Daytona and Talladega, he has changed spotters this year, from Clayton Hughes to Drew Herring, who has NASCAR Xfinity Series driving experience with JGR (and a best finish of fourth at Kentucky Speedway in 2012).

“I’ve got a list of things I’ve been working on,” Truex said. “I brought in a change in spotter this year to try to be better at speedways, which is now … you look at the 550 (horsepower) package, basically speedway racing on restarts for a few laps.

“Things like that, we’ve been working on to get better at. It’s everything. It takes all of that to win these races. They are very difficult to win. We look at every avenue.”

Now retired from NASCAR racing, Brendan Gaughan has handed off his superspeedway driving duties to a fellow Las Vegas resident.

When the No. 62 Beard Motorsports Chevrolet takes to the track this week, Noah Gragson will be behind the wheel, preparing for his NASCAR Cup Series debut in Sunday’s Daytona 500 (2:30 p.m. ET on FOX, MRN and SiriusXM NASCAR Radio). The first Cup start for the full-time JR Motorsports Xfinity Series driver comes in the aftermath of the death of team owner Mark Beard Sr. on Jan. 31.

The original plan was for Gragson to race conservatively until the end of the Great American Race, but that changed recently.

“It started off as, ‘You need to go ride and take your time and just be there at the end,’ but now it’s transitioned into Mrs. (Linda) Beard giving me the thumbs up to go,” Gragson said. “She told me to, ‘Drive the (heck) out of it.’ Those were her exact words. I’m excited, because I feel like that’s more of my driving style.

“It’s definitely going to be a new challenge, a new opportunity. There’s going to be adversity, but I know the car will be strong and, hopefully, I’ll be able to adapt sooner rather than later with the package for the Cup car being so much different from the Xfinity car. I’m confident in my ability at superspeedway racing. In fact, I’m a lot more confident than I was at this time last year.

“I’ve been able to run up front at these superspeedway races, lead laps at pretty much all of them, win stages, and I won the race at Daytona last year in the Xfinity Series. It’s going be a great opportunity. I’ve been dreaming of it my whole, entire life to make a Cup start, and now I have that opportunity, and it’s all thanks to the Beard family and Brendan and all the partners involved.”