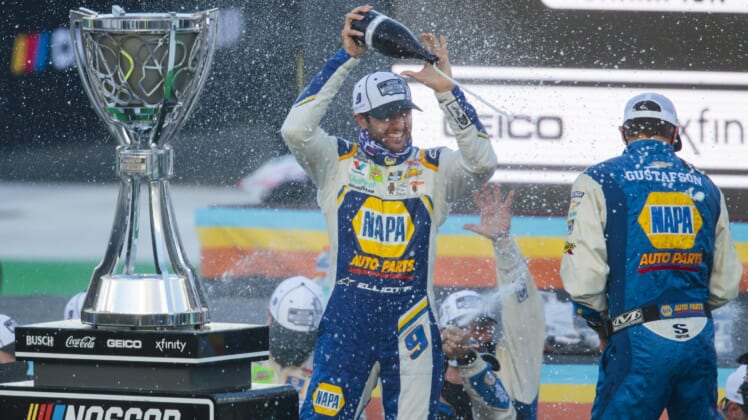 Hendrick Motorsports goes into the 2021 season with serious momentum after Chase Elliott secured his first Cup Series championship at Phoenix Raceway last November. There are many changes for Hendrick this season, such as a Kyle Larson replacing Jimmie Johnson and Alex Bowman moving to the No. 48 car.

With Hendrick and Richard Childless Racing coming together to create a common Chevrolet engine, the hope will be to improve on last season as a whole with Chevrolet. The new schedule should also help when it comes to performance for the team.

Here are four things to look for when it comes Hendrick Motorsports in 2021.

Will Chase Elliott lead Hendrick Motorsports to another championship?

Chase Elliott won his first NASCAR Cup Series championship in 2020 and Hendrick Motorsports’ first championship since Jimmie Johnson’s record-tying seventh championship in 2016. Elliott has proven that he can be one of the faces of NASCAR for a long time and could be the leader of the organization again this year.

The 25-year-old driver comes into the season as one of the favorites and should be treated as such. While a championship is obviously the end goal for every driver, there is room for improvement during the regular season to close out on more wins. Elliott remains with his championship crew chief Alan Gustafson.

Elliott may have been one of the biggest beneficiaries of the new schedule as NASCAR added four new road courses for this season with the Daytona Road Course, Indianapolis Motor Speedway Road Course, Road America, and the Circuit of the Americas. He is one of NASCAR’s best road course drivers and now will have seven opportunities to be the legitimate favorite at the track.

Kyle Larson did not compete in the full 2020 season due to his suspension, but he still found his way to Hendrick Motorsports to drive the No. 5 car. Larson, 28, is a generational talent who has been compressed due to the lack of strong equipment at Chip Ganassi Racing from 2014 to 2020.

Larson brings new energy to the team after Hendrick struggled for a majority of last season outside of Chase Elliott. He will be paired with Jimmie Johnson’s former crew chief Cliff Daniels as they both seek to become championship contenders in 2021.

While the expectations are high, it will be smart to be patient with Larson as he enters back into NASCAR after missing 32 races last season. He should be fully up to speed once the season starts to have momentum, but it may be unrealistic to expect him to win right out of the gate.

Larson will look to bring home his first NASCAR Cup Series championship and secure Daniels his first win as a crew chief.

William Byron may be the next breakout star in NASCAR after winning his first career Cup Series race at Daytona last season to secure his spot in the playoffs. Byron, 23, will be paired with his former Truck Series crew chief Rudy Fugle, as they look to recreate the magic of Byron’s seven-win season in 2016.

Byron has improved every season since he entered the Cup Series, yet has been criticized due to his slow starts. He flew through the Xfinity and Truck Series in two seasons and now enters his fourth season with Hendrick. Byron has secured more top-10 finishes every season and could be on the verge of his first multi-win season in the Cup Series.

One of the biggest improvements that can help Byron reach this level is consistency. If he can run in the top-10 on a regular basis while earning stage points and playoff points, it will go a long way for his confidence in competing at the highest level.

Byron is aiming to win multiple races this season and possibly contend for his first NASCAR Cup Series championship in 2021.

Alex Bowman still has more to prove at Hendrick Motorsports

Alex Bowman drove in the No. 88 car last season for Hendrick Motorsports, but will now race in the No. 48 Ally Chevrolet after Jimmie Johnson retired. Bowman, 27, has won one race for each of the past two seasons and now has everything available to him for a successful 2021 campaign.

He will continue his relationship with Greg Ives as his crew chief, as they both make the move to the No. 48. Bowman enters 2021 in his contract year with Hendrick and should be able to compete at a high level after doing so in 2020 during the playoffs.

Bowman’s three teammates are all looking likely to win multiple races this season, which puts the pressure on him to perform. He has a full season sponsor now and has been given everything that he needs. Bowman should carry momentum into 2021 after a strong playoff last season.