Stewart-Haas Racing goes into 2021 looking to win their third NACAR Cup Series Championship. Here are four things to look for with the organization this season 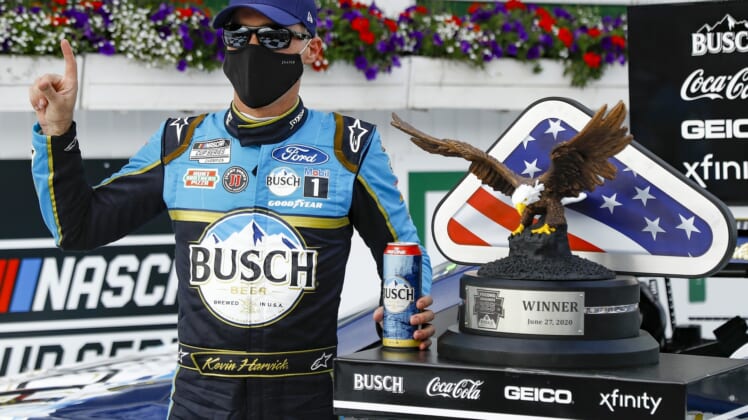 Stewart-Haas Racing had a good season last year with two of their drivers making the playoffs, however, both were unable to make the Championship 4 due to poor performances. The organization welcomes a new driver to the No. 14 car after Clint Bowyer retired and transitioned to the Fox Sports booth full-time.

Chase Briscoe will drive the No. 14 HighPoint Ford for the organization in 2021 after having a very successful career in the NASCAR Xfinity Series. After coming short of a title in 2020, the organization looks to win its third NASCAR Cup Series championship.

Here are four things to look for when it comes to Stewart-Haas Racing in 2021.

Does Kevin Harvick have another dominant season left in the tank?

Kevin Harvick came up short in 2020 after having the best season of his career. Harvick won nine races, the most of his career, but was eliminated at Martinsville in the Round of 8 after a last-ditch effort to pass Kyle Busch failed. He will be paired with crew chief Rodney Childress for their eighth season.

The 45-year-old driver comes into 2021 hoping to replicate last season. However, the older NASCAR drivers become, the level of their performance takes a huge hit. For example, Jimmie Johnson won the 2016 championship and won three races in the next four seasons.

Maybe, last season was Harvick’s best chance to win a championship. There will be many eyes on Harvick this season due to his dominance last season. He will need to produce at a high level after choking a chance away at a title in 2020.

Harvick goes into the 2021 season in pursuit of his second NASCAR Cup Series championship with Stewart-Haas Racing.

Aric Almirola had one of the better years of his career despite not winning a race during the 2020 season. Almirola, 36, had a career-high six top-5 finishes and 18 top-10 finishes on the season. He will be paired with crew Mike Bugarewicz for their second season together at Stewart-Haas Racing.

Almirola went on a stretch of five races during the middle of the season where he finished in the top-5 position. He drove really well during the summer month and was the second-best Stewart-Haas Racing driver for the majority of the season. He hasn’t won a race since 2018, but he has come close many times.

If he can replicate last season and drive even better, he could be a top-10 driver in the series. This is around the age where drivers begin to enter their prime and Almirola may be entering his prime soon with one of the better teams in the NASCAR Cup Series.

Almirola goes into the 2021 season looking to have his first multi-win season of his career at Stewart-Haas Racing.

Cole Custer surprised many people and made the playoffs in his first season in the NASCAR Cup Series. Custer, 23, improved as the season went on and finished with one win, two top-5 finishes, and seven top-10 finishes. He will be paired with crew chief Mike Shiplett for their second season together.

Custer ended the 2020 season with four finishes in the top-15 in five races after being eliminated in the Round of 16. Unfortunately for Custer, they will not be returning to Kentucky Motor Speedway which is the place of his first win. He has improved every season he has been in a racecar and that should be the situation again this year.

There is more competition for the playoffs this season with a couple of new teams entering the sports such as Trackhouse Racing Team with Pitbull and 23XI Racing with Michael Jordan. There will be many teams that don’t make the playoffs that would normally make it.

Custer goes into the 2021 looking to win his second-career race in the NASCAR Cup Series for Stewart-Haas Racing.

Will Chase Briscoe make the playoffs in his rookie season?

Chase Briscoe moves into the No. 14 car for Stewart-Haas Racing after Clint Bowyer retired at the conclusion of the 2020 season. Briscoe, 26, has endured a long and difficult journey to reach this point in his racing career. He will be paired with crew chief Johnny Klausmeier for his rookie season.

There should be high expectations for someone who was the most Cup-ready driver in the NASCAR Xfinity Series last season. Briscoe won’t have the benefit of practice, just as rookies Christopher Bell, Cole Custer, and Tyler Reddick. Which leads us to wonder if Briscoe can make the playoffs in his first year.

Briscoe goes into the 2021 season trying to learn as much as he can in pursuit of his first career NACAR Cup Series win with Stewart-Haas Racing.